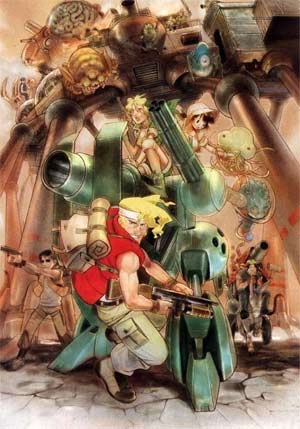 With SNK’s recent announcement of bringing the original Fatal Fury game to XBox Live Arcade, you could tell that the developer was interested in bringing its collection of old-school games to the modern platforms.

While Fatal Fury may have seemed like a logical choice after the success of Street Fighter 2 on XBLA, but I figured Metal Slug would be the best choice to kick things off. Look like SNK wasn’t far behind me.

At the Tokyo Game Show, SNK expressed interest in bringing the first Metal Slug game to Microsoft’s game download service. No release date has been announced, but it probably won’t be until late 2007. It will be interesting how the competition between Metal Slug and it’s successor, Alien Hominid and its predecessor, Contra pans out.

In other Metal Slug news, SNK also announced that the new Metal Slug 6 game (on the Atomiswave arcade hardware) will be added to the lineup of the upcoming Metal Slug Anthology
for the Nintendo Wii (no confirmation on the Sony PSP version).