Update 10/23/2007: We now know a bit more about Street Fighter 4 based on a video interview with Capcom 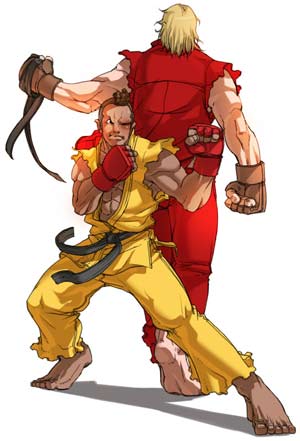 Original Post:
Seems like every year we hear this rumor again (actually, it’s almost been a year ago exactly since the last mention), but In the new issue of EGM magazine (source) the rumor mill section points to a possible 2007 release of the next chapter in the Street Fighter series… Street Fighter IV. Supposedly, this information is based off of trusted industry insiders.

I would like to believe this rumor as I am a huge fan of Street Fighter 3: Third Strike and I would love to see the series taken to the next level if the correct direction is taken.

However, it seems that mosat every member involved in the original development of the best Street Fighter games have now moved onto other projects. (Such as Super Dragonball Z)

There was also as very strong rumor over a year ago that there was going to be a Street Fighter game that took place between Street Fighter Alpha and Street Fighter 2. As interesting as that sounded, we never saw any results from this as well.

At this point the only 2D fighting games that Capcom seems to be interested in is quick remixes such as Capcom Fighting Jam.

However, I would absolutely love be wrong.

It’s been more than half a decade since a true original Capcom fighting game and 10 years since a new SF series. The arcades are vanishing; Capcom had better do this now if they’d like to give the true fans something to tour the world over like they did for Super Turbo and 3rd Strike. I’d be shocked if this happened, but I’d be there in a second.

This game, if it ever happens, should be the catalyst for a new breed of 2D gaming. With all this new technology to work with since SFIII, Capcom ought to ditch the sprites and start working with vectored characters that would have animation much like that seen in the Street Fighter II animated movie. Just imagine it! Sammy started the trend with higher-rez sprites in Guilty Gear X, but now Capcom should take that to the next level. Come on Capcom, give us what we want!

I’d love to see Street Fighter IV come out!! Ken, Ryu and the regulars could be there, but as lesser characters. I’d like to see Sean, Sakura and Dan get built up into more important characters and given a few upgrades in skill and strength. I’d also love it if Kens son, Mel, was made into a character for this game, and a central character. Like the new main character or something. He’d be young but I think that would cool. Give him a gi like his father and the same move list. It’d be like Gohan to DBZ in a way. Have a movelist like Ken, except young and slightly adorable and totally bada$$. It would totally work. But they need to work on plot. SFIII was great for gameplay, but it was really lacking. Capcom needs to stop churning out character after character. Knock the character list down a fair bit and get stronger sense of who your playing as. There are far too many generic characters that are just rehashes of old characters. Get back to important bosses that were connected in major ways to the players. Last time I checked Akuma isn’t dead, so make him the final boss and maybe even bring Guile back out of retirement somehow. I dunno, like M. Bisons soul escapes heaven to get revenge on Akuma and Guile finds out. He comes to stop Bison, and Ryu, Ken, Mel, Sean and Sakura (and I dunno why Dan would be there but he should) show up to fight Akuma. It would rock!!

1 Get rid of all these fake characters like Q, Twelve, urien, gill, birdie and Necro(street fighter becoming more and more like mortal kombat with all these gimmicks). Bring back all the characters from street fighter 2 including the bosses! keep sean, makoto, ibuku from III, and Gen, Guy, Adon!, Dan and Sakura from alpha.
-favorite characters are Ryu,Ken,Gouki,Guile,Chunli,Sagat
2 Work on a storyline from the UDONcomics (Udon is doing SF justice). plus work on something from the past, like the dan/sagat feud or adon/sagat beef and the history between gouki/gouken.
3 work on a intense trainings program for handling the character, sort of a boxing school kind of thing.
4 the backgrounds! i love the backgrounds from ryu, ibuku and akuma from street fighter III, but the rest of third strike is a failure in my eyes.
5 the animation from third strike is nice, combine them with the character design from udon. so it’s like playing a “moving comicbook”.
and oh, if capcom decided to throw in new characters.. what about a dutch k1 fighter? Semmy Schilt, Remy Bonjasky, Hoost you can’t deny the dutch impact on k1!

I’d like to see a new character as strong or stronger than Akuma to take on Ryu. Also, they need to get rid of M.Bison. He’s not a very powerful character in the game at all, no offense to other fans.

Could they also make Street Fighter cross over to The King of Fighters series for comics as well too? I know for a fact they did with the japanese version of Street Fighter comic series. Also, what is the secret to the “Dark Hadou” Akuma doesn’t want anyone to reveal? I’m searching to find out…

I am in total support of an SFIV game. I’m torn between including a massive list of characters from SFI,SFII, SFA, SFEX, and SFIII, or a completly new game with newer fighters as well as the same core fighters. I would also love to see a game taking place way before SFI, with Gouken, Akuma, and Gotetsu featured, as an Alpha type game.As for SFIV, careful character selection would be needed. I was playing 3rd Strike yesterday and was thinking of what a bad selection of characters there was, did we really need Sean, Necro(Dhalsim/Blanka), or Twelve? Do any fans out there feel this way? please feel free to email me. I’m also looking for the best SF forum if anyone could help. thanks.

Capcom should really consider Street Fighter IV. It would be great. Think about it: What if Urien reformed Shadowloo so he could overthrow Gill (he jeolous of Gill, his brother)? Capcom should bring back the majority of characters such as Guile, Honda, Sakura, Vega. You could bring in a whole host of new abilities, game modes and storylines. And it would play great on the Wii, or Xbox 360, where the layouts are pretty much perfect.

Capcom needs to listen to the fans and come out with a new Street Fighter. The should team up with Udon comic and work on new character that can be tied into the Street Fighter universe with their comic. They should know that the game will be so PROFITABLE for them, becuase of the huge fan base. Anyone from capcom listening???????

*sighs* i shouldnt even be talking about this…oh well, remeber this codename

Me thinks they should just make a humonguos conspiracy behind the illuminati having connections with shadoloo so Gill is’nt just some random dude with powers. I think he sucked balls especially tha ressurection thing but it would @ least give depth to tha SF characters.

Then put all the SF characters from every game and tha anime movies in this one game. Garuda from tha EX series would kick ass in 2D! They could even put him in there and his mission could be to take out Akuma, Bison & gill since he is a manifestation of all evil. Plus i would love to see Dan have his revenge on Sagat using tha dark hadou and i think EVERY SF fan has wanted to play as Gouken 🙂

I tink they shuld hav all the former bosses: Akuma, M.Bison (yea i think hez cool), Gill and make a new one…were lyke every1 is fighting every1 for supremercy and give every1 new ass moves…alos they need desturctable enviroments!(lyke smashing ppl thru walls etc)…that wuld be real sweet. O nd it needs Urien too cause he is 133t 🙂

the shoul have street fighter vs the king of fighter

Street Fighter 4 should have…..

*All the figthers from all the:

Of course with the HD sprites or make it 3rd strike / CVS 2 sprites. Make Sheng Long as the last boss. Bison, Shin-Akuma and Gill as the sub-bosses.

I want to see Balrog vs Dudley; Hugo vs Zangief; Alex vs Birdie; Sakura vs Elena; Makoto vs Karin; Bison vs Gill; Dhalsim vs Necro; Guile vs Q; and more. Can you imagine that!!!!

*The Power Bars Should be:

i hink they should bring back characters from the first game.
like: lee, geki, retsu, joe etc.