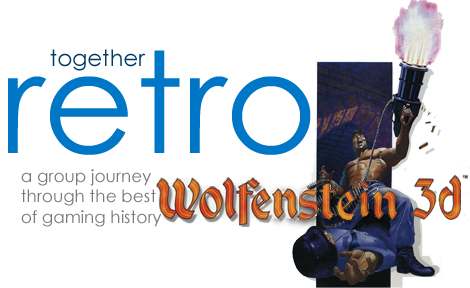 For many gamers, Wolfenstein 3D is considered the game that launched the most popular genre of the last twenty years: the first person shooter. And while it can’t technically boast being the first ever FPS, Wolfenstein 3D remains one of the best loved and most influential games ever created in any genre.  If you haven’t ever sat down to play it through or if you haven’t done so for some time, this month’s Together Retro (timed to coincide with the 20th anniversary of the game’s release in 1992) is the perfect opportunity to (re)discover this classic.

iD software created Wolfenstein 3D as a spiritual sequel of sorts to the Muse Software titles Castle Wolfenstein and Beyond Castle Wolfenstein, both of which were released in the early 1980s as stealth-based shooters set in Nazi Germany during World War II.  In those games, as in Wolfenstein 3D, the player was charged with finding and killing Hitler while taking down Nazi henchmen and discovering treasure chests in the process.  iD took this basic concept and added their own unique graphical capabilities, design elements, sense of humor, and (soon to become) signature style.  In iD’s game, the player took on the role of William “B.J.” Blazkowicz who, over the course of several episodes (each comprised of about ten stages), escaped a Nazi prison and confronted various nefarious Nazis (including Der Führer himself).

The controls in Wolfenstein 3D are, by contemporary FPS standards, very simple. The game’s default controls were to use the keyboard arrow keys to move forward, back, left, and right, to strafe with the Alt key, to fire with Ctrl, to open doors with space, and to run with the left shift.  Doom veterans who missed this earlier iD title should feel right at home, but more modern FPS gamers can customize control pads, mice, and keyboard controls to their liking on the PC.

The game has been widely ported (see below for more details), and basic controls translate fairly well to console control pads/analog sticks since there aren’t many buttons that need to be mapped.  The ability to remap controls in these ports varies widely.

Wolfenstein 3D’s success and iD’s subsequent meteoric rise to prominence in the games industry means that there has been no shortage of Wolfenstein games in the twenty years since its initial release.  Spear of Destiny, a sequel that uses the same engine, was released only four months after Wolfenstein 3D hit store shelves.  Return to Castle Wolfenstein was wildly popular 2001 “reboot” of the series that once again placed the player in Blazkowicz’s shoes, this time using the Quake III engine.  Return also prompted a 2003 stand-alone multiplayer release of Wolfenstein: Enemy Territory, a game that has arguably had as much influence on contemporary FPS multiplayer as the original did on classic FPS single player campaigns.  The newest entry in the series, simply entitled Wolfenstein, was released in 2009.

Wolfenstein 3D is also notable for being one of the earliest games to find widespread success due, in part, to the internet.  The shareware version of the game was placed on BBS boards, and, as David Kushner writes in Masters of Doom:

“Wolfenstein evolved into an underground sensation. Before the press picked up on it, the gamers online were abuzz about the game’s immersive blend of high technology and gruesome game play—the synthesis of Carmack’s and Romero’s personal passions. Forums on the various BBSs and on the emerging commercial online services — Prodigy, CompuServe, and America Online — brimmed with discussion about the game. The Internet’s discussion forum, Usenet, was on fire. E-mails poured in to the office.”

The game was originally released on floppy disc and CD for the PC, but has been officially ported to several consoles and handhelds including the SNES (with censorship), the Jaguar, the 3DO (with enhanced sprites), and the Game Boy Advance.  It is also available on modern digital distribution platforms such as Steam, the PSN, and XBLA.  It has been unofficially ported to almost everything imaginable.  Most purists would argue that the game should be played on a PC, but any of the official ports are generally excellent.

In addition, iD recently released a touch-screen friendly reimagining of the game knows as Wolfenstein RPG for iOS and Android.

Instead of posting your thoughts below, please join us this month in the Together Retro section of the forum to discuss the game, its various ports and sequels, any popular culture surrounding the game, secrets and strategies found within, and anything else you’d like to sound off about.

Wow never seen this before. Pretty damn crazy. Graphics remind me of the old SNES doom or something