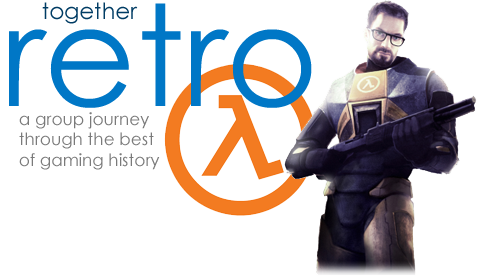 Presented by Dsheinem
New To Together Retro? Check out the introduction to the club

It would be fair to say that Half-Life is one of the most important games in all of gaming history. Not only did it popularize and innovate the story-driven First Person Shooter, but it also thrust Valve into the spotlight as a leading PC game developer, a position which they have capitalized on in their efforts to redefine PC gaming development and distribution in the fifteen years since its release. Join us this month as we play through this undisputed classic.

Half-Life tells the story of Gordon Freeman, a physicist at the Black Mesa Research Facility in New Mexico who works on the cutting edge of scientific research and experimentation. Early in the game, an incident occurs at the laboratory that propels Gordon into a story filled with many interesting twists and turns, forces him to engage in a variety of combat situations against both human and non-human enemies, and leads to the discovery of new and useful technologies for him to add to his arsenal.

The details of the story are best left to be discovered by the player, but suffice to say the telling of the story was, at the time, probably more acclaimed than the narrative itself. Many of the taken for granted conventions in modern First Person Shooters, such as cinematic camerawork, frequent use of items in the environment, memorable interactions with NPCs, rather impressive AI from NPCs, and in-engine cut-scenes were popularized (if not necessarily pioneered) by Valve’s debut title. The (scalable) difficulty offers something for almost any level of FPS skill, and the game continues to be very playable today.

It is also worth mentioning some of Half-Life’s other innovative elements such as the health system (with the health stations that could be used to “top-up” instead of just wasting a full pack etc.), and the first-person platforming (although that was mostly at the end of the game) was actually good instead of frustrating as is often the case.

The best choice for playing the game is via PC (Microsoft, Mac, and Linux OSes are all supported and versions for each can be downloaded via Valve’s own Steam platform), but there are also several console ports to choose from. The game was ported to the PS2 by Gearbox Studios and released in 2001, and it was posthumously leaked online by folks involved in the Dreamcast scene for that console. The PC port is generally considered to be the definitive version and was supported for many years after release with patches and updates…the game has also been given many fan modifications on PC that offer a number of options not found on consoles.

Half Life saw several expansions released which continued the story of Black Mesa or otherwise fleshed out some other characters or components of the world Valve created. These titles included Half-Life: Opposing Force and Half-Life: Blue Shift on the PC and Half-Life: Decay, a co-op title included in the PS2 release as an add-on

No mention of Half-Life: Source or Black Mesa? Playing the latter right now. Incredible work, that team did.

Well damn. I guess I was just a bit too early. Just beat Half Life 1 and Opposing Force last month for the first time. Absolutely wonderful games. Great mixture of Sci-Fi shooter and survival horror.

I have said leak for the Dreamcast. Only problem is each subsequent save takes up more memory on the VMU. Otherwise, it’s a fun game.