Note from racketboy: Racketboy contributor, Ack returns with another beginner’s lesson in pre-NES gaming hardware — this time we take a look at the Vectrex. BTW, The RetroGaming 101 series is aimed at gamers who are just starting out in the classic gaming scene or are curious about an older console that they don’t know much about yet.

Released in the United States in November of 1982, the Vectrex would only last for two short years, and even less time in foreign markets. But in that time, the machine would develop a cult following that has helped spawn one of the most creative homebrew communities for any console. The Vectrex is another example of what the video game community lost in the video game crash of 1983, and in this case, it looks like the public really missed out. 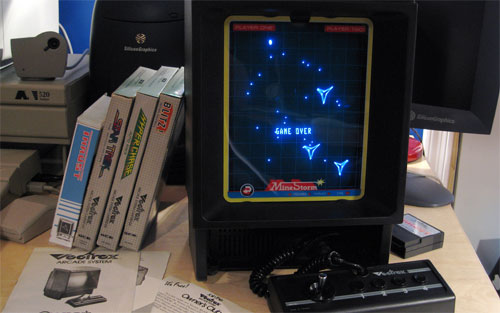 See the Vectrex in Action 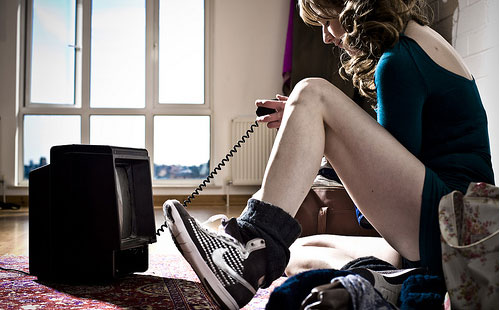 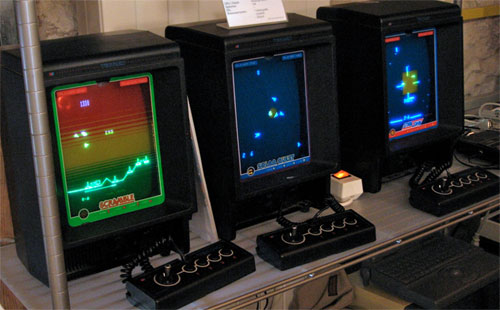 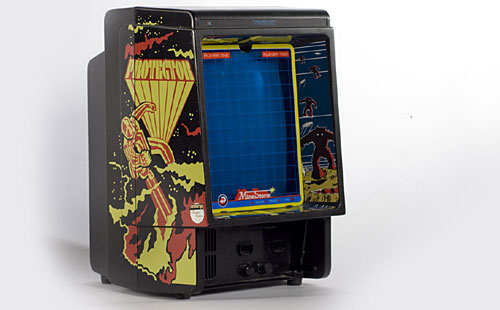 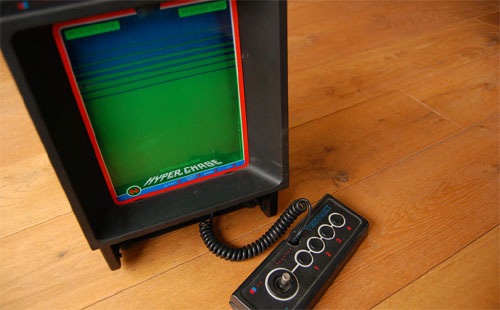 Alright! The Vectrex is the only pre-NES console that I actively have hooked up and use, since it’s so novel. The homebrew scene is really cool, as well. I have a port of Galaxian that a guy in Europe made, and it’s really quite impressive.

Yes, the Vectrex is indeed quite awesome. Love the chick in leg warmers playing Vectrex on the floor too, lol.

The Vectrex is a great system to own if you want a project. You can make your own overlays. You can adapt a PSX controller for a second player (since originals are pretty hard to come by). You can build a light pen, or even a multi-cart. If you really want to get crazy, you can buy a vector generator for your computer, and play vector MAME games on a real vector monitor. Awesome.

A lot of the best games available are homebrew. Vectrex Galaxian (Vectrexian) has already been mentioned. Gravitrex (Gravitar) is also good, as is Protector (Defender). For originals, Fortress of Narzod is pretty cool. Solar Quest and Bedlam are also recommended.

Someone just needs to make a port of Battlezone. Please?!

Now this is one console that I have never ever heard of! I’ll really have to check this thing out! I’ve always liked Vector graphics 🙂

One thing I should mention about the Vectrex is that over time the image has a tendency to drift from center. You can fix this by opening it up and adjusting a couple of the pots inside. However, you need to be careful when doing this as you can get a very nasty shock from the CRT.

I remember playing this in the back of my Dad’s friends pawn shop. For years I could never figure out what it was, besides awesome.

The handheld Vectrex idea wasn’t abandoned due to the Gameboy, it was cancelled due to cold feet by MB on the proposed price point. Jay Smith didn’t even know about the Gameboy at that moment, and it was more than a year before it was released in Japan. Ironically the price point Smith wanted for the project in the US was around the same price Nintendo launched the Gameboy at…

I’ve never seen a portable vector monitor, how did they intend to make a hand held Vectrex?

FYI ‘Vectrex’ has been nominated to compete in this month’s AwesomeOff.

thank you for promoting the Vectrex Museum – can you correct the name at “Additional Resources” – actually it says “The Vectrx Museum”.

I have added your Beginners Guide to the Museums Linkpage.

ps: Have a look to the limited offer:
The VecArcade Contruction Kit! at the museums page.

Thanks — and I fixed the typo 🙂
And that construction kit looks sweet!

Mark of Classic Game Room led me to the Vectrex. thanks Mark!

The Vectrex is awesome! Got mine a few years ago for 65$, then I searched online info about it. This led me to know about Classic Game Room. This is how universe is balanced. By now, you can get reproduction overlays on the web, which is a good thing. Still waiting to receive the one for Minestorm by mail, to see if it was worth it.

I have a Vectrex system that I just love. I seen it and realized i just had own one for my collection as I had never seen a vector based system before this. I bought it about three years ago for ten dollars from a garage sale! So if your lucky you can still find them cheap. Mine worked perfectly when I fist got it, played it a while and put it away. Then a month later I wanted to play it again. I turned it on and it worked well except for the sound was gone with the exception of the normal buzz. I put it away thinking I would fix it in the near future. I took it out to fix after a few weeks and the sound works again and has been working ever since! I guess it fixed itself. Anyone know how durable these systems are and is it okay to play on a regular basis or will it likely break and not be able to fix?

Little-known games, such as the Vectrex, have the propensity of becoming legendary.Having features that were ahead of its time is what made the game so popular. I’m an original owner, and as such did not realize the value of the system until a computer geek friend told me. I was amazed that this compact system had such a following, and went home directly to take account of all the Vectrex items I had in my possession. So, I have the entire unit, with original mine-storm overlay+all accompanying paperwork and all the box components, including the internal cardboard, plastic bag- the only thing I don’t have is the receipt! Game still plays exceptionally well, but as Tommaso stated above ^^^ the sound board took a vacation. The sound came back, but it took a number of on/off cycles to get the sound to work again. So if your Vectrex sound isn’t working, have some patience- it’ll come back.