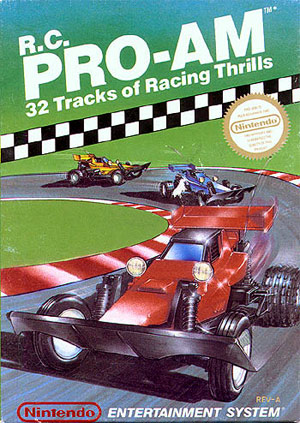 Note from racketboy: With so many unique and interesting games from the past out there, I obviously don’t have time to review them all myself. This time around we have racketboy.com contributer, fastbilly1 reviewing one of his favorite Nintendo classics, R.C. Pro Am for the Nintendo Entertainment System…

Introduction
In 1987 Rare released what many believe as their best game. It single handedly brought vehicular combat to the 8bit generation and created its own subset of the racing genre. Sure it was preceded by Death Race and those like it, but this was the first of its kind where the objects looked like what they were representing. But after doing all that it faded into relative obscurity in the annals of gaming history. It was simply following the pattern set into place by Rare’s other amazing series of that time, Sabrewulf comes to mind. This game of course is none other than RC Pro-Am.

Not only did RC Pro-Am spawn a sequel on the NES, the aptly titled RC Pro-Am 2 (one of the few 4 player NES games), and an excellent portable version, like previously mentioned it spawn a genre. Borrowing its dynamic isometric point of view, slick controls, and quick gameplay, many games followed suit. Rock and Roll Racing being the most obvious, but even Mario Kart utilized the zany powerup idea birthed in RC Pro-Am. Its essence can be felt in games even today.

Gameplay
But even the greats have their inspirations. Super Sprint and Death Race being two of the most obvious from the gameplay point of view. Super Sprint utilized a birds eye view for up to three player F1 racing on a snaking course, while Death Race brought weapons to vehicles for console gameplay – One could argue that MUDs, Rouges, and Autoduel (all pc titles) all brought these elements in first, but this is my writing so you get my opinion.Other elements introduced in RC Pro-Am would be the obvious track based upgrades, Gears, Engine, and Tire – representing Acceleration, Top Speed, and Grip respectively. Aswell as the ability to have your vehicle upgrade if you collect the letters NINTENDO off of the tracks (you start as a truck, move to a van, then finally a race car). The ubiquitous bombs, rockets, and generic ammo stars are also present, beginning at stage 2. The superstar of the game, the rollcage, appears on stage 3 and quickly becomes a coveted item.  Unlike the weapons, the bots can pickup this powerup.  Why does this become a problem, you ask? Well, picking up a rollcage renders a player invulnerable for roughly 30 seconds. So your weapons do not harm them and they can run you off the track much like what happens when you hit the bots with a rocket. In a simpler statement, they mess you up.

Even with plenty of ammunition you still have to know how to drive to win. Also the stages are designed to be unforgiving. The first few stages are fairly straight forward, but soon after, the benefits and hazards come in full force. Good news first, littered on stages in strategic locations lay zippers. Shown as a set of red arrow tips in series, zippers will temporarily increase your speed to maximum for a short distance, what seems like roughly thirty in game feet. But with the good, the sole good, there is a plethora of hazards. From the basic water slick, which will simply slow you down, to the retractable wall that will wreck you instantly, the hazards are deviously placed. There are really only three, the aforementioned water slick and wall, along with an oil slick which causes you to spin while continuing in the direction your momentum is carrying you. The oil slick becomes even more destructive is that if you hit a wall or opponent when spinning, you wreck. There is also a rain cloud that is simply a water slick that shifts left and right covering more area, and generally just being annoying. Now the stages are a thing of beauty because of how tricky the creators were. There are some stages where you will be on a trail of zippers and then randomly there will be a popup wall – timed so that if you were the second one off the mark and maintained a decent speed, it will hit you right as you arrive, everyone else will make it just fine. Or the oilsicks right in the way of a perfect drift off a zipper around a turn. RC Pro-Am shows really the epitome of what classic games were, amazing gameplay coupled with damn near impossible tracks. 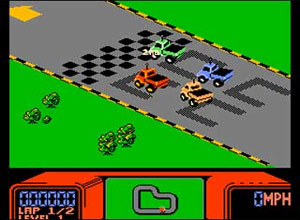 But that brings up another point I have yet to touch on, drifting. To win RC Pro-Am you must master the vehicles drifting. Since it is a two button game, shoot and go, drifting is achieved by taping turn, and not holding it down. Drifting does slow you down and provides you with what some consider and annoying sound, but it gives you an offensive edge in that if you know what you are doing, you can begin to drift, take out an enemy, then tighten your drift around their wrecked hull and pass them. Of course, this seems very passé compared to modern games were you can perform a bootleggers turns with very little effort, but at the time it was an art.

After every race you are given a trophy based on how well you did in the previous round. There is a fairly complicated point system as well, based on the power-ups you picked up, how many hazards you hit, etc, but that is unimportant when you get a Gold trophy for first place. The points do get you the big trophies at the top of your trophy case however.

Sound & Music
There is one major downside to many people to this amazing game, the lack of in game music. Sure you have a rocking pre game beat, and title screen. But during the game itself the only sounds you hear are of the battlefield. The whine of your RC engine, the “droo” of the zipper, the “boo-boo-pa” of the rollcage, the crash of a rocket fire and the satisfying “blam” of it hitting its target. While many have nostalgic memories of these noise, others abhor them and wont play the game for that reason.

Conclusion
Asteroids and Joust are what many would consider classics, I would rank RC Pro-Am up there with the best. Sure it has its share of problems, but it has all the right markings of an amazing game that surprisingly went unnoticed by so many.

Man that guy needs to get a life.

This is a great little game that totally deserves this kind of attention.

Great review of a classic game. Back in the day this and Rad Racer were the top tier racing games on the NES. Its a shame that Rad Racer II couldn’t capture the brilliance of the first game. I think the pseudo-3D, although cool, really made the game feel too different. Anyone know if RC Pro-Am can be beaten or how many tracks there are? I am fairly certain I made it to around track 30 a few times; but not much farther than that.

32 tracks, after that it returns to track one and the bots accelerate to 127 mph almost instantly meaning if you dont rocket the last place one enough, there is no way to win. The highest I know of is someone making it to track four on the second time through.

The track amount is actually on the box.

No mention of the Genesis version? Come on, that one is great!

Somatix, RC Pro-Am games kick my butt harder than yours. Lv 30 is great!

If you like RC ProAm you might also want to check out Cobra Triangle. This is also by RARE and I’d call it RC ProAm with boats.. not to mention logs, jumps, mines, whirlpools, sharks, sea monsters, and those damn swimmers..

Yeah, Cobra Triangle is pretty cool.
I had it featured on my Hidden Gems of the NES feature:
http://www.racketboy.com/retro/2007/03/best-undiscovered-nintendo-nes-games.html

I think the handicaps and loose controls ruin it in the later levels, and the car upgrade system could’ve been more customizable, even on the NES.
Still it’s a fun game, but IIRC the sequel was a bit better.

I think there are more than 32 tracks before it returns to level one. I played it today till track 37 and it didin´t repeat. even track 35 is a complete new formed level. But i wonder cause on the package it is said: 32 tracks of racing thrills…

…but perhaps i was even confused…