My son has been enthusiastic about video games from a very young age without much prompting. He got locked into Sonic and then Mario and has been very curious about both vintage and modern game systems.

Before I actually had kids, I thought I would have this grand retro gamer parent plan of only starting my kids out on early era games before exposing them to more modern stuff. I though maybe they could enjoy the old stuff and experience at least some of the graphics and gameplay evolution over the generations. 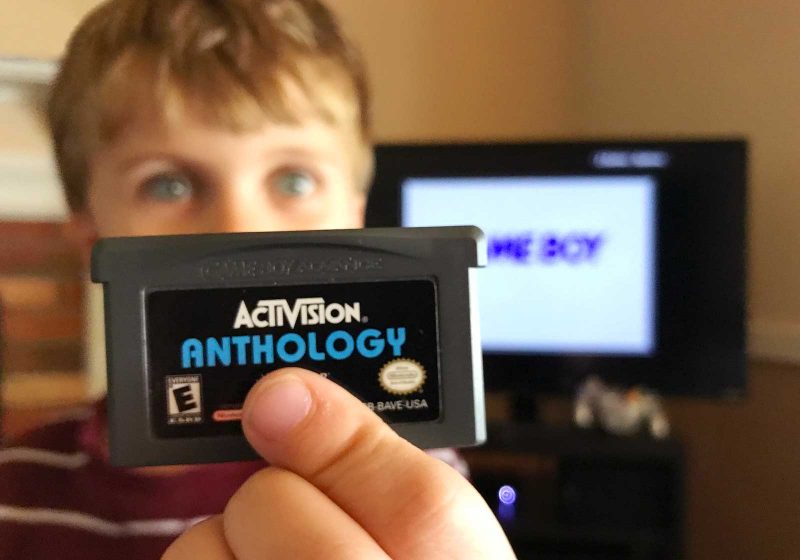 In reality, unless you’re planning on confining your gaming into a closed space and being disciplined in doing a controlled experiment with your kids, this isn’t very practical. Also, if your kids have any exposure or media and/or visiting stores that sell video games, they are going to see modern stuff and want to try it.  Even though my son loved 2D games like Mario, Sonic, and Zelda, he’s also spent a good amount of time playing the likes of Mario Galaxy/Odyssey and some 3D Zelda. It’s easy to fear that once a kid experiences the modern wonders that the industry now offers, they will lose interest in 80s-era stuff, let alone games from the 70s(!).

Our Nintendo Wii recently went out of commission with a lens unable to read the discs, so I brought up the Gamecube to the living room (with a great new Gamecube HDMI adapter) along with the wonderful Game Boy Player to temporarily replace the Wii in as one of the primary consoles for the kids (along with our recent SNES Classic addition).

Of course, there are many great 2D titles to play in the Gameboy lineup. We tinkered with a handful of carts before I popped in the Activision Anthology GBA cart that includes a bunch of Atari 2600 titles. I didn’t necessarily expect my little guy to latch onto these much, but he ended up spending more time with that cartridge than most of the Gamecube, SNES, and other games that we’ve played in recent months.

Of course as I’ve mentioned in past journal entries (a decade ago before I had kids), one of the reasons retro games are great is that they have much simpler controls and gameplay goals, but after my kids spent time with these Atari classics, I realized there were many other aspects that appeal to young kids that you don’t really appreciate until you see them though their eyes. 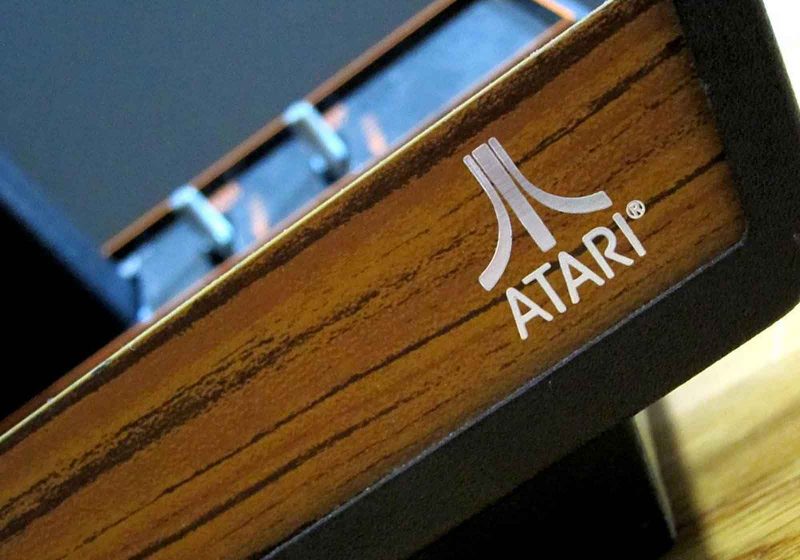 Not Much to Discourage A Young Player

As much as my son loves to play to colorful and detailed games that we have all come to love, since the NES era, there has been more of a focus on making the most of your “lives” and the dreaded “Game Over” screen. Also, once you’ve seen those dreaded words, you often have at least a few screens you have to go through before you can try again. This may not sound like much to us, but for a kid that’s only 3 or 4 years old, this can be a bit discouraging.

Thinking back, I still remember the days when I was pretty young and I got a little intimidated by certain parts of Super Mario Bros And the like and asked somebody else to help get me past a certain part… (can you relate?). My son does that a lot right now. He wants to explore what the game has to share, but he’s always worried that he’s going to die and have to go through that whole process of starting over.

However, with many Atari games (or classic arcade games for that matter), There are rarely menu screens, Game Over screens or any process in starting over other than hitting button to restart. To a little kid, this all seems transparent and it greatly reduces the friction and makes them feel comfortable with potential failure.

With Atari 2600 games, it sometimes it takes little effort to figure out what exactly you’re supposed to do on certain games. Sometimes, even if you track down instructions in a manual, things aren’t entirely clear.

One of the best examples on the Activision Anthology cartridge we explored was Pressure Cooker. It’s a game where you’re a burger chef that’s grabbing different ingredients that come at you and then place them on the partial burgers that are progressing down a conveyer belt. Once you finish a burger, you have to take it to another area to be wrapped for your customers. The instructions the Anthology provided still didn’t help me figure out if I was putting stuff in the right place or if I was maybe assembling the burgers incorrectly.

But the cool thing was that this made for great conversation and experimentation between my son and I. We both tried things out and talked to through trying to get points and get the “good” sounds instead of the “bad” beeps. Even after I got distracted by something else in the house, he was still plugging away on Pressure Cooker and having a lot of fun with it. He never got frustrated. Even if he wasn’t doing it the “right” way, he could experiment and keep on trying without being let down. While some of it was just “playing”, it was also great to see him trying to troubleshoot problems — a great trait to build in a young child. 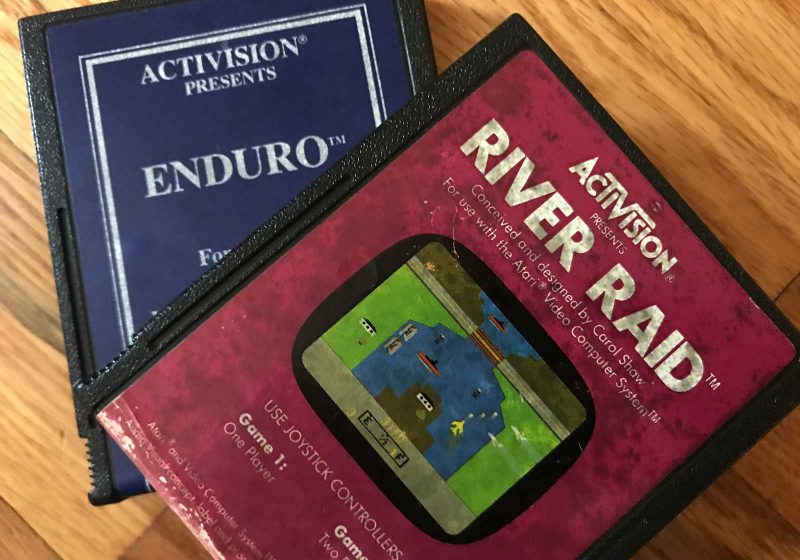 Simplicity Open To Imagination and Discussion

One of my fears about introducing Atari 2600 games later on was that those much more limited visuals might not seem interesting after experiencing a Nintendo Switch or even a Sega Genesis. However, I found that, in a way, there were actually secret advantages to those limited graphics: imagination and conversation!

There’s numerous examples of games that could work in this scenario, but Enduro is the game that sticks out from our game session the other day. Enduro is a rather straightforward racing game where you mostly have to try to keep up with the curves of the road and dodge the cars as you pass them. Personally, it actually impressed me with how fast and smooth it was for an Atari 2600 game.

Anyway, for this illustration, the interesting thing about Enduro was how the landscape/environment changed as you progressed. You start out on a pretty typical landscape filled with green — one that you would image was in the middle of the day. After a short while, the track and the surroundings turned mostly white — this prompted and the kids to mention that it looked like it was snowing and such. A bit later, the “snow” disappeared and it looked like it was the evening with sunset shades filling the horizon. “Oh! It’s getting to be night time now!” We talked about that for a little bit before it got real dark! The screen is now almost pure black aside from your car and all these red tail lights of cars you’re getting ready to pass. I was actually really impressed that the developers creatively used their limited palettes and sprites to create an environmental experience like that and the kids really enjoyed seeing it and talking about it.

The kids have experienced environment changes in more modern games before, but with the more abstract presentation, it actually made more of an impression on them and they talked about it more — all while still cruising that little car around. It was a real joy to see them engulfed in it.

How Do You Work Retro Games into Parenting?

In hindsight, it’s interesting to compare my thoughts about being a retro gamer parent before kids with the reality of having young children now.  What are your experiences as parent integrating retro games?  If you aren’t a parent yet, but curious about the future, what questions come to mind?  I’d love to hear your thoughts in the comments below!

Thanks for providing such a personal article racket. No kids (yet), but this is something as a gamer I’ve thought about plenty of times, introducing the offspring to gaming.

Thanks! I’m hoping to do more like this if a good tangent hits my brain. This particular was one born out of an afternoon. We had so much fun tinkering with these games as a break from more modern stuff and it was so fun hearing his thoughts on it. I couldn’t help by jot down all my thoughts before I forgot them all. It makes for a great personal journal entry too 🙂

Very interesting! I’ll soon be a dad and tought about these things too in the past wondering if they would be completly unniterested with my retro game. Thats fascinating.

As a gamer and former teacher, I found what you’ve shared here both fascinating and delightful. We don’t need to force retro games on kids We need to really watch what children latch onto and I know not only will classic games prove their greatness, but we will learn new things about those games.

That’s very kind and great to hear 🙂 I think your thoughts are a great way to look at it. A child is a great way to evaluate timeless classics, when you think about it. They don’t have the nostalgia factor. If it’s a great game (or sometimes specifically, a great port of a great game), it will hold up.

Thank’s for this interesting Article. I’m from germany and me and my wife do have 3 Children. I love to play Consoles but the problem is that my wife don’t want me to play when our children are around. Now I wanted to ask: does your wife likes to play, too oder do you have a lot of discussions because of playing with your son?

That’s a great question! My wife does like to play, but as can be expected we have some differences in game interests. She loves Zelda and I really have to be in the mood for it. My son even picks up on this a bit as he’ll ask to play different games or types of games with either her or myself.

Fantastic article.
More of these, please!
i run a modern sort of arcade pop-up concept at 2 weekly events here in Atlanta and i’m always looking for ways to connect with people via gaming.
Your experience with your kids playing Enduro is exactly the same as i’ve had with several patrons and it’s amazing what limiting the tech lets your imagination do. Keep it coming, dude! 😀

Ha! That’s so great to hear 🙂 I’m hoping to cover more things like this here and there. Interacting with kids is a great way to get fresh perspectives on all aspects of life, including games. So many things we forget about or overlook as we get older.

My two boys loved Kirby on NES, but my daughter loves only Streets of rage II on sega… I thought that’d be different ))