One of my online buddies, Xavier, known on Instagram as RetroEscape, has a strong arcade focus in his home gaming collection, but console games are still quite important to him.  But all that requires a lot of storage and he has a non-typical approach to storage.   Even if you like more of a “display” element to game storage, you might still pick up some ideas for how to store your “extras”

When asking him about how many boards he has in his collection and how he goes about storing them all, he responded,

How do you think your collection or hardware setup differs from the typical retro collection?

I believe my collection differs because I own games and consoles/systems I am interested in playing and don’t collect for the sake of collecting or having a “complete set” for a console/system, I have specific targeting.  Also, the vast majority of the collection (90%+) is not previously owned.  I’m very fortunate to have a father that’s a record collector (LPs) and by watching him as a child I’ve applied similar techniques to preserve the hardware and software for decades.  I know what works and what doesn’t.  Perfect example – Did you know that those PET (Polyethylene Terephthalate) Video Game Box Protectors scratch CD Jewel Cases?  Especially the larger, long jewel cases for the Sega CD, Sega Saturn and original PlayStation games.  Solution – I place the games in a sealed Mylar Bag then place them in the PET Box Protector. 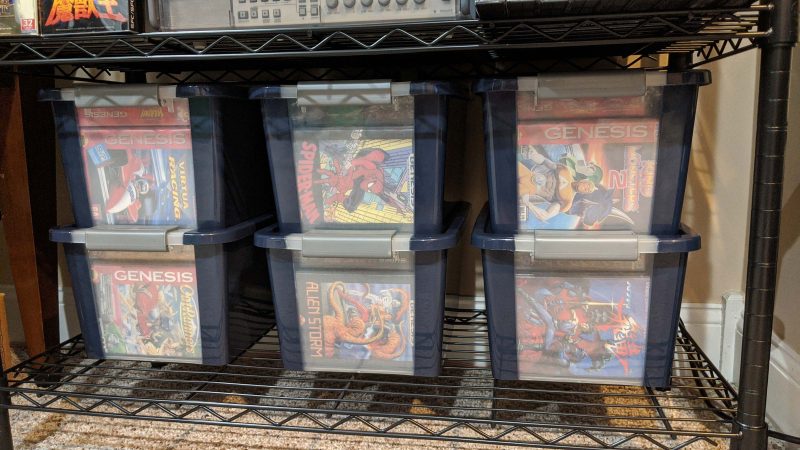 Could you just riff a bit on if your overall perspective on storage vs display and your personal view on collecting.

As far as the Storage vs. Display routine we have to go back in time to when I was a teenager, during the inception of the 32-bit era, the 3DO to be exact.  Why the 3DO?  Till the 3DO came along the largest console game cases I had to deal with were the Sega CD long cases.  With the Sega CD and anything prior like the Atari(s), NES, SNES, and Sega Genesis I had them on a bookshelf.  The TurboGrafx-16 game cases were absolutely perfect, CD Jewel Case size and at that time there were so many options due to the Audio Compact Disc in general, I had a Case Logic plastic CD container to take care of that.

With the bookshelf just search the console section and take out the game you wanted to play which was in alphabetical order.  After time though I noticed the bookshelf shelves started to bow, go concave after so many years and dusting the bookshelf was becoming a real chore that I didn’t look forward to when it was time.  It was time for a change…

With the 3DO this is where I had to buy my first plastic container to house and especially protect the games.  Why protect?  I had  a friend at the time that was the only other person that owned the 3DO and his game boxes were falling apart, breaking from the fold seams and the plastic corners all busted….not good.  This had to be addressed in order to preserve the packaging.  I had the game boxes in the large plastic container and I had the games in their own CD Jewel Cases so I wouldn’t have to put any wear and tear on the originals.  Problem solved.

Another great solution occurred Since they were in the large plastic container I didn’t have to $#@&ING dust them anymore!  After this I transferred the majority of my then collection to plastic containers and anything that was a CD Jewel Case was placed in a jewel case container that had a flip-down lid to show the game titles.

Life was a little better at least for a little while…Till 32-bit was in full swing and the attack of the fragile plastic long cases came to be – North American Sega Saturn and the first run of PSX games.  For this and SNK Neo Geo AES it’s time to get some furniture.  A credenza to be exact.  The unit houses anything out of scope in size including boxed consoles.

Fast forward to today…After decades of accumulating consoles and games I have almost everything in some sort of container that conforms to the packaging form factor.

Do you have any games on display at all?  Or if its purely having out what you’re in the middle of playing?

For display I have duplicates of games that aren’t in “Like New” condition, same goes for consoles I have out to play games, the most beat up consoles are out and connected but not in all cases. For games that I don’t have a duplicate, I only have the game out when I’m playing it, same goes for Arcade game boards.

When I’m not playing it, it’s “stored”.  As far as finding, accessing “stored” games I maintain an Excel spreadsheet as to where it is located, but I have a general idea as to where it is as the majority is stored based on the console.  Sega Genesis is boxed with Sega Genesis, GameCube with GameCube, etc.  Loose carts?  Again containers that conform to the cartridge form factor.  Sega Master System/Genesis trading card boxes, anything larger plastic containers. 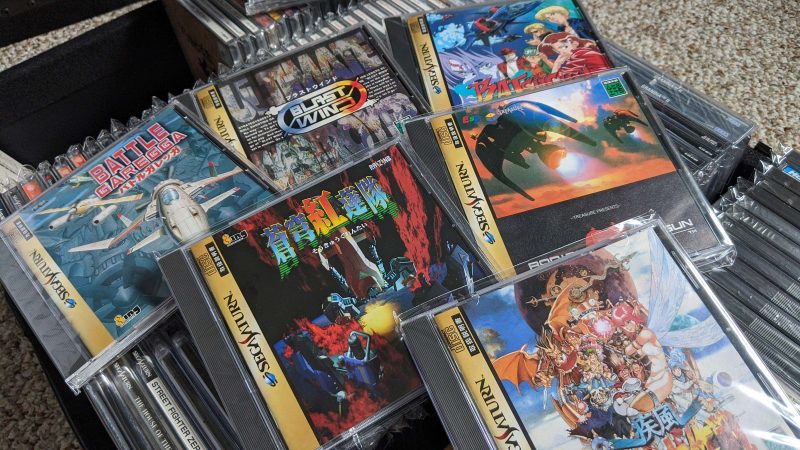 So how do you go about making sure your storage and organization is ideal?

Sure.  So, the other aspect of storing “boxed” games is how to arrange the game so no damage can happen.  North American Sega CD/Sega Saturn long cases/boxes, especially the games that didn’t come with a foam insert?  I lay them down flat with the manual facing down, this will prevent the manual from warping.  CD Jewel Case, DVD style cases like PSX, Japanese Sega Saturn, Xbox, GameCube, PS2?  I pay attention to the orientation of the manual (how is the manual held in place within the casing) within the case and place them where the manual won’t bang into the case insert (manual) holders and try to keep them as flat as possible again to prevent any kind of warping.

Ok, so lets dig into the supplies and materials you use for storing your games
Aside from the storage containers I have the games protected utilizing Polyethylene or Mylar sleeves/bags and PET Game Box/Case Protectors .  With the Game Box/Case Protectors you have to be careful with these, as these can and will scratch any and all plastic cases such as CD sized Jewel cases and Long Box Cases as I detailed in a previous interview.  For the Long Boxes/Cases I place the case in a Mylar (poly) sleeve preventing any scratching then place the game in the PET protector.  For CD sized Jewel cases I just store them in a Poly sleeve/bag and into a container, no Game Box Protector needed.

For the majority of my storage supplies I shop at Bags Unlimited.

My father has bought from them for ages, since the 1980’s and not a single product as ever let the two of us down.
To store CDs, DVD sized cases, SNES, N64, Jaguar, other odds and ends and even Neo Geo MVS carts:
ULTRA BOXX Plastic Corrugated CD/ DVD BIG Box 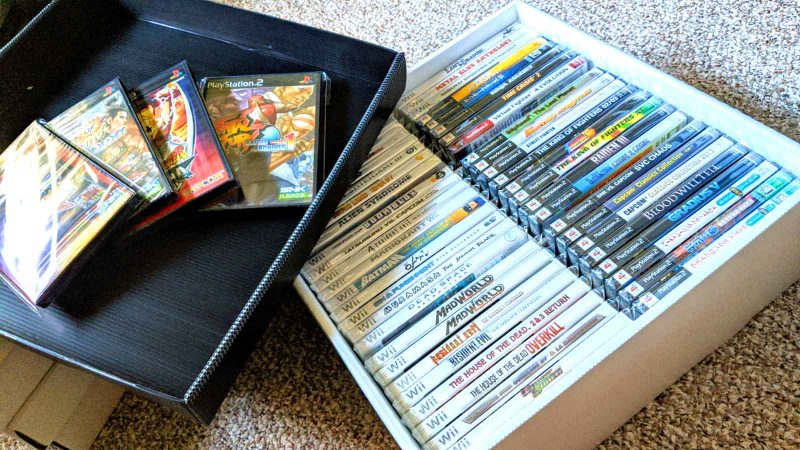 I buy the following to seal/protect cases from them as well, they offer many sizes:
Poly Sleeves – From Bags Unlimited (see also Amazon CD and DVD poly Sleeves  and eBay for Poly Sleeves) 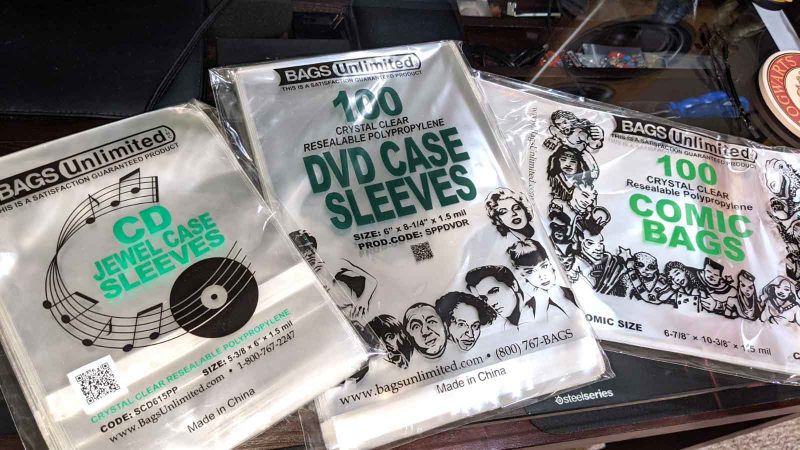 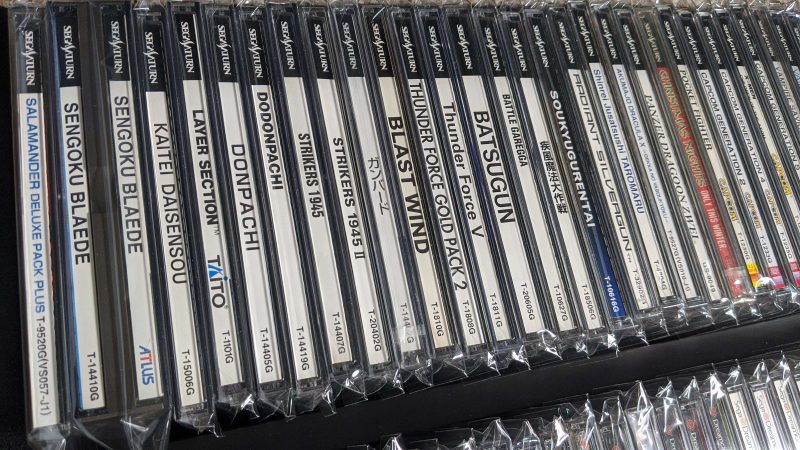 For those PET Box protectors I buy from Press Start Games (they used to be known as RetroGameFreak), unfortunately they are overseas (Holland) and shipping can be very pricey. I have tested many different protectors and by far they are the best quality. One thing to watch out for is since they are in Europe, if you buy say Sega Saturn protectors it’s manufactured for the European sized cases, same for Dreamcast.

For Complete-In-Box Sega Genesis cases I use the following, very secure and holds 12 games per case and love the way they stack and the fact they have latches to secure the lids.
KIS Bi-Box S Storage Box from Home Depot 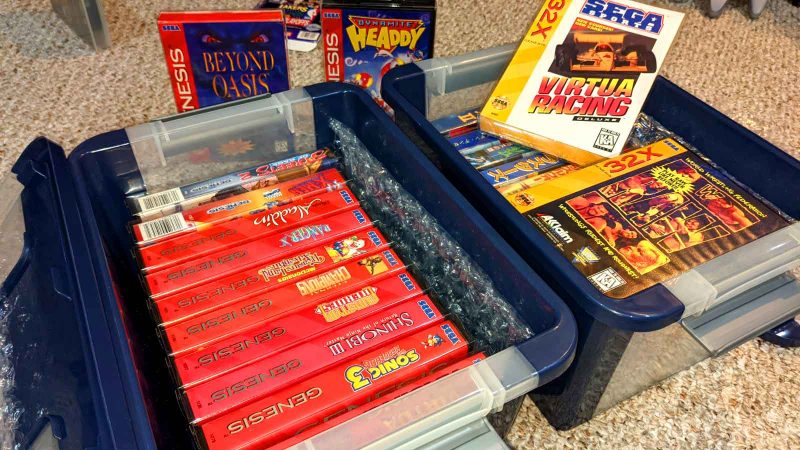 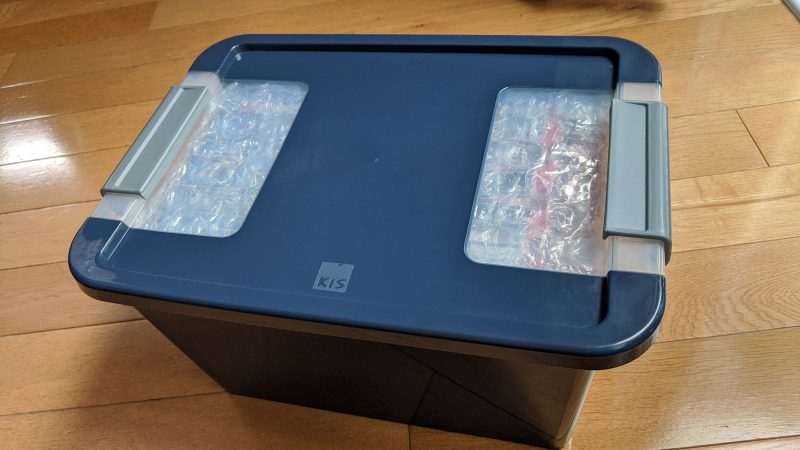 For loose Sega Genesis, SMS and even 32X I use trading card boxes you can pickup at your local comicbook shop (or on Amazon or eBay), I recommend taking a cart to test as sizes vary. I prefer the ones that have two rows as the boxes are easily stackable, and the boxes retain their strength over time whereas boxes with three or four rows become weak over time. 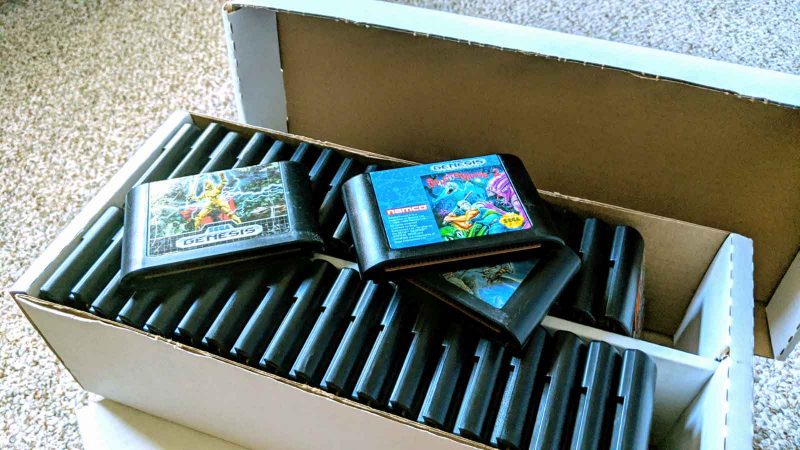 For other loose carts such as SNES, N64, Atari and yes you can use these for Sega too I have these smaller Sterile containers. Very stackable and very portable.
Sterilite 18058606 Large Flip Top, Clear, 6-Pack on Amazon 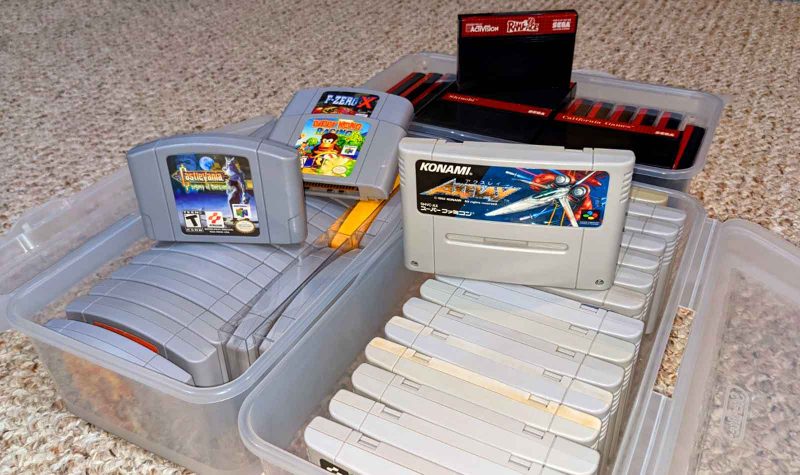 Also, these have proven to work well as well for larger items, has latches to properly secure the lids and once again are stackable, NES carts can be placed standing up which is great cause you’ll be able to select a game easily:
Sterilite 15 Quart Stadium Blue Latch Box at Walmart 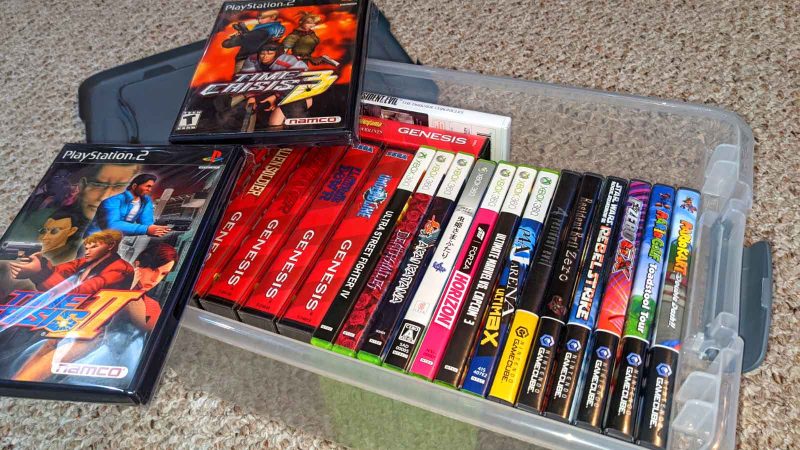 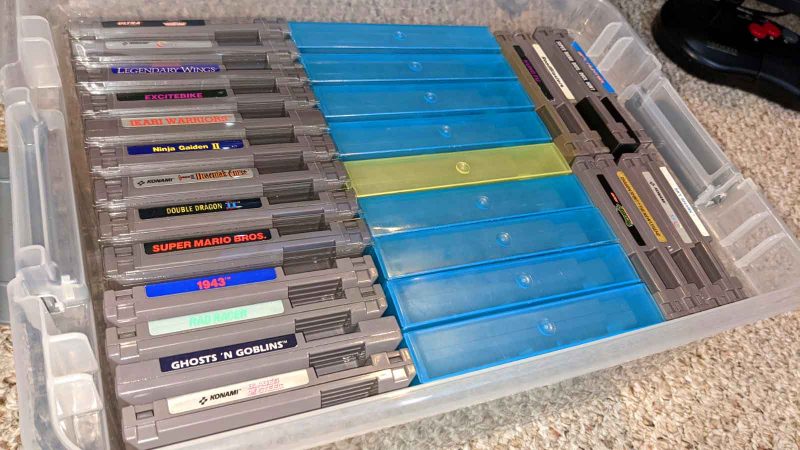 Now for the nuclear storage option and for those that have deep pockets. The best storage container I have ever come across and own is this one. It contains my most valuable CD jewel case games. It can also hold DVD (PS2/Wii/etc.) sized cased as well:
Odyssey CCD300E Carpeted Cd Case With Surface Mount Hardware on Amazon 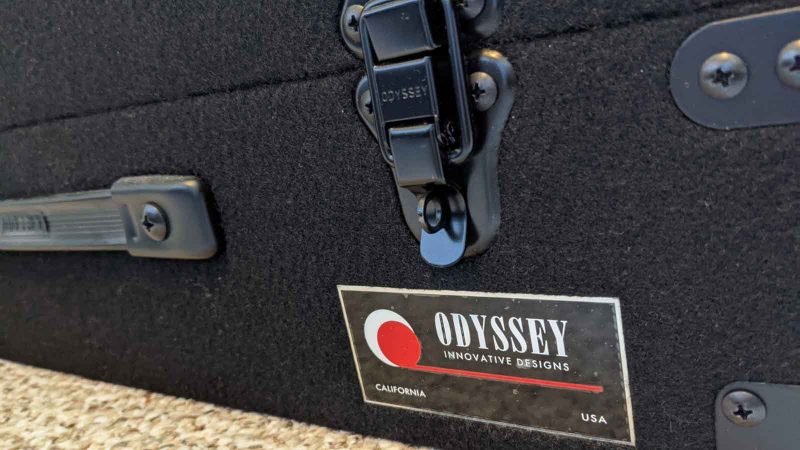 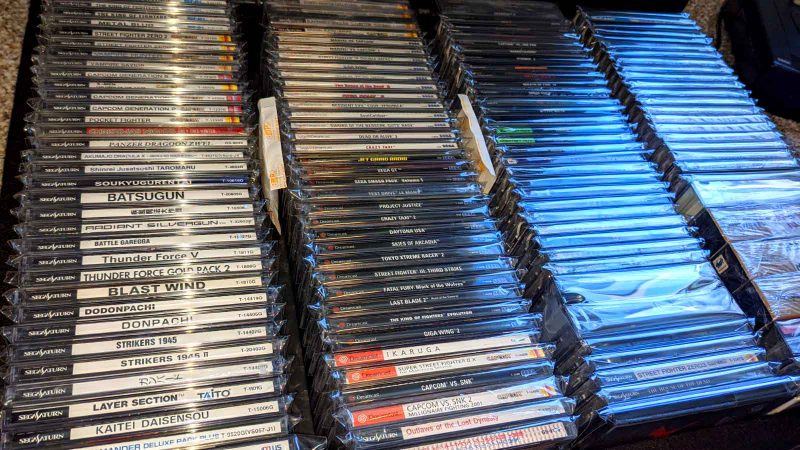 As for as the best sleeve protectors the following company makes theirs from Mylar (better than polypropylene or, unfortunately there are no CD jewel case or DVD sizes. I use the comic book sized bags for PSX, Sega CD, Saturn long boxes the place them in a PET Box Protector. Remember those PET Box Protectors will scratch jewel and long box cases!

One last item of interest….you know those little packets you find in items such as shoes or sneaker boxes, other items as well? Those are desiccant/silica gel packets (“poor man’s” Damp-Rid if you will), great for keeping things moisture free. I save and use those where needed. It’s a great aid in protecting manuals, tray inserts, even prevents rust as in the staples used in manuals! I use these packets where I don’t have a dehumidifier setup. Please note these packets become less effective after two to three years depending on the environment they are placed in (technically it doesn’t expire, it can be “reset” and used over and over again) and I only use them where items already have a protective sleeve.
Here is an example, packet in play but each of the CD cases (games) are protected with a polypropylene or mylar sleeve in case the packet (desiccant/silca gel) is compromised. 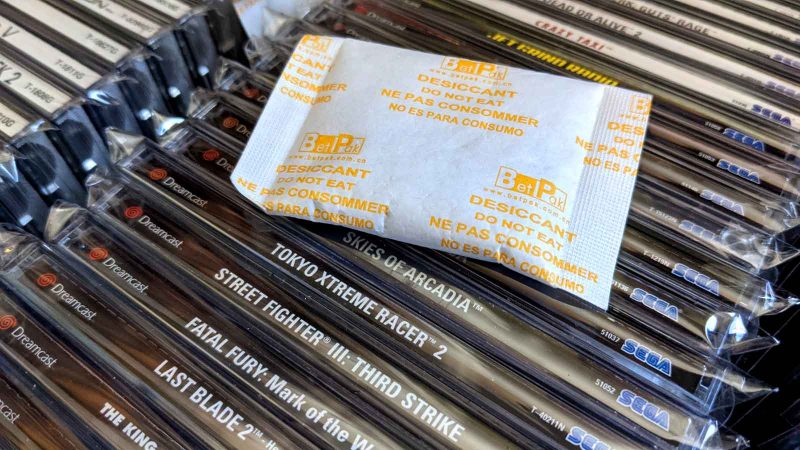 As far as storing larger items such as consoles, large console peripherals such as lightguns and arcade sticks (boxed or unboxed) I recommend the following line of containers due to their size and strength (especially when stacking them). Please note there are a wide variety of sizes but these ones from Home Depot are the ones I find to fit my needs 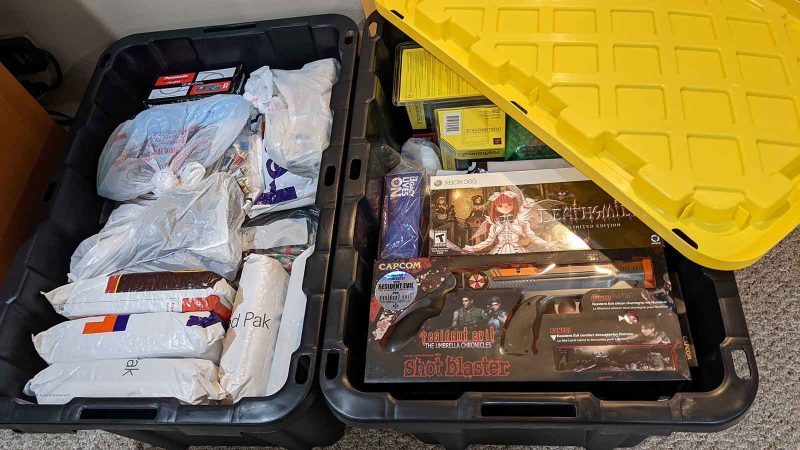 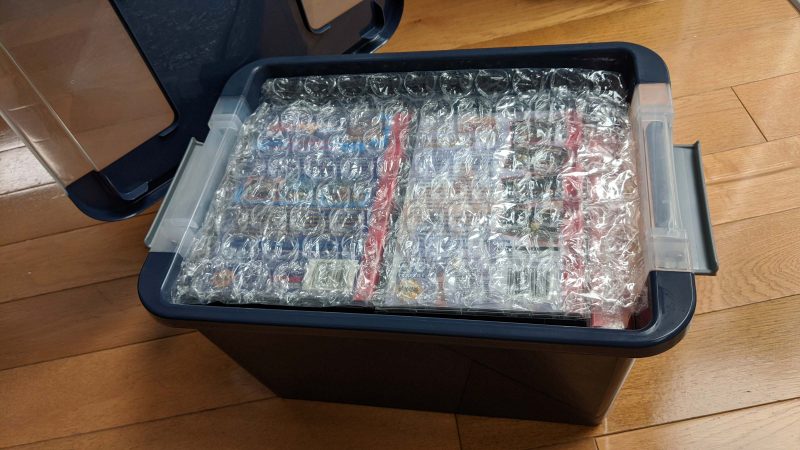 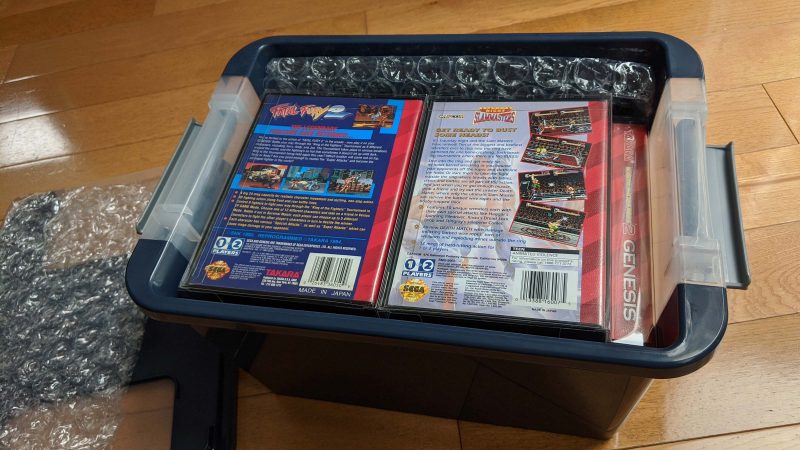 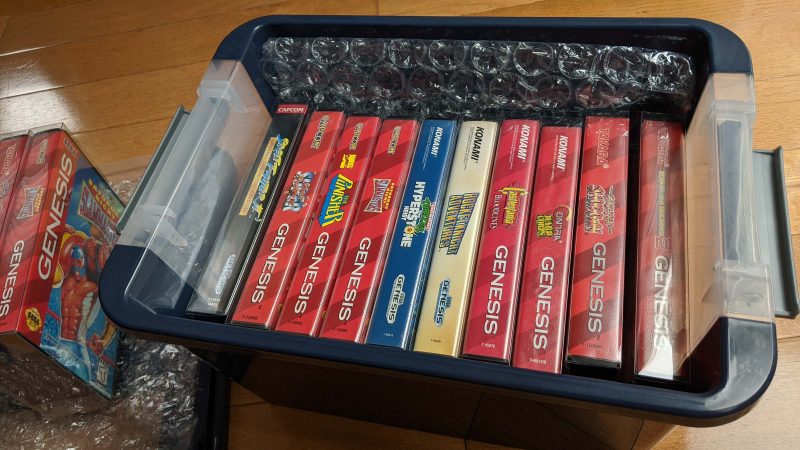