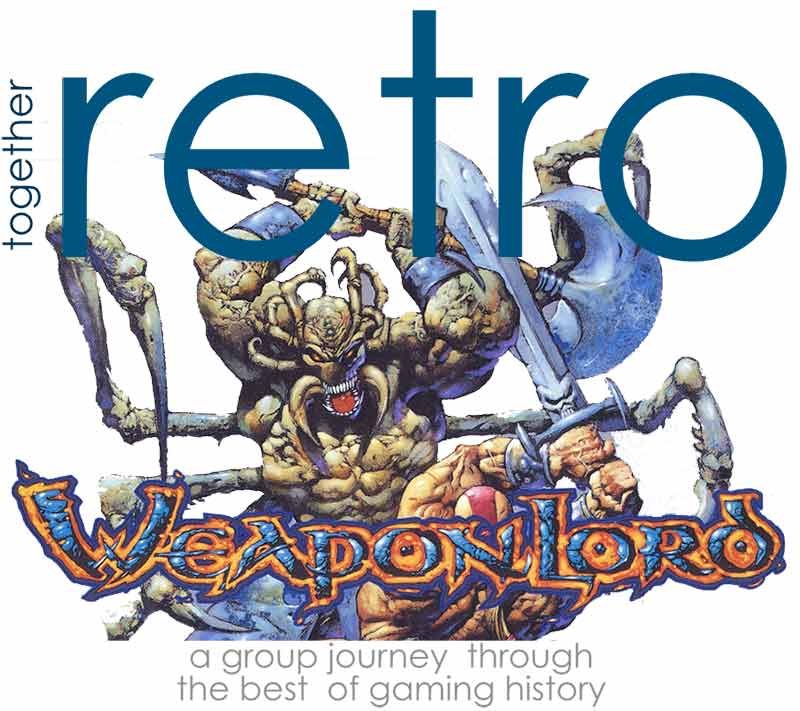 “That which does not kill us, makes us stronger”
– Friedrich Nietzsche

Bones crunch beneath your feet, the only remains of the nameless weak who could not survive the arena. The air is thick and heavy with stench: perspiration, dried blood, death, fear. A din fills your ears, a tinnitus brought on by the roar of the crowd, the war cry of your opponent, the grunts and growls that rip forth from your own lips. That which stands before you is hulking, armed, and raging, teeth barred, spittle flying, ready to gorge itself on your flesh and blood. It is a thing of meat. Show it the colors of its internal organs. Let it taste your mettle through new mouths you carve into its body.

This is WeaponLord, and it seeks to break you. It yearns to show you a swift and terrible violence, of an extremity you have never known. Mortal Kombat, Primal Rage, Killer Instinct…these are but children’s playthings in WeaponLord’s pit of horrors, and it only understands one thing: kill or be killed. That is the only truth, and it is one it holds with righteous fury.

Do you seize up, cower like a baby in the womb, whimper and run away so as not to face your doom? Or do you take up its challenge and howl with fury, until all that remains is hot blood on your skin and proof of your quality through the evisceration of your opponent? Is your destiny fear or strength? For the meek do not inherit the earth.

Such is WeaponLord. Do you answer its cry for battle?

“Violence, naked force, has settled more issues in history than has any other factor, and the contrary opinion is wishful thinking at its worst.”
– Starship Troopers

James Goddard and Dave Winstead were friends and old hands at developing fighting games, both with a background at Capcom and experience in developing and designing various Street Fighter II characters and ports. They studied their games extensively, they listened to the fans, and most importantly, they respected the input of the hardcore enthusiasts. And they wanted to take what they had learned and develop it into a style that was deep, appealed to their tastes, and was for the fans they had gotten to know. So when Visual Concepts offered Goddard the chance to create a fighting game, codenamed “Melee”, he brought Winstead aboard.

Goddard loved the stories of Robert E. Howard and the world of Conan the Barbarian. He and Winstead listened to heavy metal. They played fighters extensively. And they wanted their game to appeal to themselves as well as the non-button mashing gamers who had been so devoted to their work. That end result was WeaponLord, a game which featured only 7 playable characters but huge sprites, thumping music, an incredibly deep combat system, and a world as grim and dark as they could create.

Unfortunately, they did this as the 16-bit era was entering its twilight phase in preparation for the coming 32-bit CD revolution. WeaponLord released in 1995, the same year that the Sega Saturn and Sony PlayStation made their US debut. 3D was the steadily growing rage, and while sales for Nintendo and Sega were still going strong, audience attention was turning elsewhere.

As a result of its late release and inherent difficulty, WeaponLord struggled to find a large fan base. But for those fans who sought it out, it became a niche, the fighting game equivalent of Descent II, one whose depths are probed endlessly as diehard players competed and battled either in person or over the phone line via the XBAND modem. WeaponLord was designed with the XBAND in mind, and it advertised it openly, leading to a game that was built for online play.

Now here is your chance to revel in the the difficulty and brutality that was the dream. Are you good enough to call yourself the WeaponLord?

WeaponLord is a 2D weapon-based Fighting game which features an Arcade mode, Story mode, and VS mode, as well as game options. While a Tutorial mode was in development, it was unfortunately never completed. While WeaponLord boasts a relatively small cast of only 7 selectable fighters, including the final boss, it is an exercise in quality over quantity: the game is incredibly deep, offering a range of techniques including a parrying system (known as “Thrust Blocking”), weapon on weapon strikes that can briefly stun opponents depending on the strength of the relative hits, weapon breaking, costume damage, a deep combo system, ground attacks, a much larger array of special moves per character than the typical 2D fighter, and even ways to kill your opponents, decapitate them, split their skulls open, and then juggle their brains.

Of course, with a system this deep, the lack of a Tutorial mode is a sore loss, because there is a lot to learn. Lead designers James Goddard and Dave Winstead spent a lot of time tweaking and pulling from their years of testing Street Fighter 2, and they were no strangers to reaching out to the more hardcore fighting game fans for input. As a result, WeaponLord ended up absurdly complex for a game of its time, with ideas that wouldn’t become norms of the genre for years.

The setting and story, focusing on a prophecy entrenched in brutal combat with barbarian characters who absolutely must kill to survive and a world composed almost entirely of skulls with spikes on them, fits the brutal gameplay. The AI also backs it, coming on strong and staying strong, so players are forced to take on computer opponents who have no qualms in unleashing their full bag of tricks from the get go.

Expect the experience to be grueling but worth it once the depth of the game becomes apparent, particularly if you consider yourself a fan of fighting games off the beaten path.

WeaponLord only saw two official releases: one for the Super Nintendo Entertainment System and one for the Sega Genesis. While the game was built into an arcade cabinet in one Golfland location in California, this was only for testing purposes as a way to generate discussion with local fighting game enthusiasts to further improve on the game. The game was always intended for home consoles.

The SNES version is the original version of WeaponLord, with the Genesis port being programmed later in the production cycle. However, both games have positives and negatives. The SNES version features more colors and more animation in the backgrounds, while the Genesis release features animation for the characters. The Genesis version runs at a higher resolution but was compressed to keep the game running the same.

Audio comes down to personal preference. Both feature similar voice samples, and only the song during the end credits is entirely different. The rest of the musical arrangements are similar, though the SNES one sounds more subdued while the Genesis version has more bass and louder volume.

The two versions feature different controls, with the Genesis buttons laid out from weakest to strongest like in Street Fighter. The SNES version changes the order of controls to utilize the shoulder buttons, so swapping between versions can be tough. Game difficulty is also different, with the SNES version starting hard but allowing the player to kill enemies and remove them from a last run before taking on the final boss, Zarak. The Genesis version gives more leeway at the start, but the player must face everyone again at their highest difficulty, regardless of whether they were killed previously.

In short, both games have trade offs that keep them roughly on par, and no version is inherently superior. Play what you like.

“There is no avoiding war; it can only be postponed to the advantage of others.”
– Niccolo Machiavelli

Unfortunately, WeaponLord never caught on with the masses. The reviews it received were mixed, with praise for the depth of gameplay and lament over the choppiness of animation for both the Sega Genesis and SNES releases. Reviewers also pointed out that the inherent difficulty of the game’s AI and the need to learn so many abilities for each character as well as counter and parrying techniques made it strictly for die-hard fighter fans; there would be no pick up and play. As a result, the game did not see significant sales, and Namco made the decision to end the potential franchise with just one game.

However, James Goddard and Dave Winstead believe the game still had an impact, most notably in Namco’s next major fighting venture: Soul Edge, a 3D fighter with weapon parrying and countering that would form the beginning of the hugely popular Soul Calibur series. Thrust-blocking also found its way into Street Fighter III with its parry system, and the numerous disarms, ground attacks, deflections, and battle damage appeared in other fighting games. The training mode that was never finished for WeaponLord did eventually find its way into Tekken 2. What it did not invent, WeaponLord built on, and it was even the subject of rumors about additional special kill combos, just like the rumors which abounded about fatalities in the Mortal Kombat franchise. As of now, nearly everything that WeaponLord brought to the table in the mid-90s can be found in modern 2D and 3D fighters.

WeaponLord was also one of the first fighting games to utilize online play via the XBAND, alongside the likes of the Mortal Kombat series, Primal Rage, and Super Street Fighter II on Genesis as well as Killer Instinct on SNES. Of these titles, only WeaponLord actively advertised with the XBAND logo on its box. Online play is now a common feature in fighting games.

James Goddard has stayed in the games industry and continued working on games such as Ryse: Son of Rome, Buffy the Vampire Slayer, and Diablo III and 2013’s Killer Instinct (you can check out his bio here) and continues to work as the Design Director of Killer Instinct at works at Microsoft Studios.  Dave Winstead worked on such titles as Soul Edge and Tekken 2 along with Buffy and Star Wars Ep 3, and is one of the experienced Combat Designers on Killer Instinct Season 1 (implementing like ½ the cast- Jago, Sabrewulf, Thunder, Sadira). He is currently still working at Amazon Games in Irvine.  Steven Chiang, another of the game’s principal programmers, went on to co-found Tiburon Entertainment and is now Executive Vice President at Warner Bros. Interactive Entertainment.

It is Goddard’s hope to one day return to the WeaponLord franchise, so a new generation can face Zarak in the pit.

“Don’t give them a sword and then not let them use it.”
– GWAR

These additional links may help you in becoming the greatest you can be.

Appreciate the article. This is one of those games I barely played but always kind of stuck in my mind that I wanted to give a good solid chance.

A little suggestion: you only have two screenshots. Show us more!

Sure thing and thanks for the feedback! I thought about that. Unfortunately, the game isn’t the most screenshot-friendly especially when it comes to variety 🙂