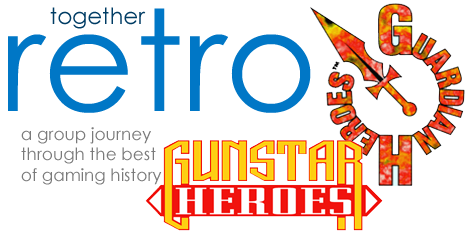 We’re featuring a double bill of Treasure games this month, each of which are highly regarded classics that represented the strengths of their respective systems and continue to shape game development to this day. Neither games takes an exceptionally long time to play through, but both offer a variety of innovations that will keep you coming back to them all month long. Even better: thanks to digital distribution these games are now more widely available than ever before, so it should be easy to find a copy of each and jump in!

Gunstar Heroes was released for the Sega Genesis in 1993 and is, to many, that best run-n-gun game to appear on a 16-bit system (which places it high in the running for best of all time).  The basics of the game are very easy to pick up – you have four weapons to choose from, each of which can be combined in a variety of ways while playing.  In addition to shooting, players can slide, jump, kick, and perform some basic melee moves (such as throwing).  Each level of the game is relatively short (though well designed), but they function primarily as the lead up to some of the most memorable and impressive boss fights to ever grace the genre.  The amount of scaling and rotating and the level detail in the sprite work are virtually unparalleled in any other game on the system, and everything moves at a crisp framerate.  The excellent and responsive gameplay, memorable boss battles, and excellent music combine to make this a game that every gamer owes it to themselves to play through.

There are a number of ways to play the game. You can pick up the Genesis cartridge itself, though it should be noted that the game has traditionally been a mid-range purchase, especially when complete with box and instructions.  A cheaper alternative might be to download the game on Xbox Live Arcade, Steam, or the PlayStation Network, as the emulation is well done and achievements/trophies have been added to the game for consoles.

The game also is the focus of the Japanese-only PS2 release “Sega AGES: Gunstar Heroes Treasure Box”, a collection that includes some alternate versions of the Genesis game, useful emulation options, and copies of Alien Soldier, Dynamite Heady, and the Game Gear version of Gunstar Heroes. It also includes trivia, artwork, and other goodies that make it the definitive document of the game.

Those who are curious might want to check out the iOS port of the game (though controlling this game with touch controls leaves much to be desired) and/or the hard-to-find and markedly different Game Gear version (available by import only and not ported by Treasure). There was also a PC version of the game released in Japan in 2004 entitled “Sega Game Honpo Gunstar Heroes”.

In addition to is continued influence on the run-n-gun genre, the game itself received a sequel called “Gunstar Super Heroes” on the Game Boy Advance.  The gameplay is changed slightly over that of the initial game, but the sequel is still well-regarded amongst fans of the original and is a standout title in the genre for the GBA library.

Guardian Heroes was released for the Sega Saturn in January 1996.  Despite sharing the “G- Heroes” title structure of the Genesis title from a few years earlier, neither the story or gameplay of Guardian Heroes is related to the earlier Treasure game.  What is the same, however, is the level of quality and innovation found in the 2D brawler/hack-n-slash/RPG.  Like Gunstar Heroes before it, Guardian Heroes has continued to influence the genres it incorporates (see Castle Crashers, for example) and it continues to be very easy to pick up and play today. A big part of the draw for the game stems from its multiple branching path options and its excellent implementation of both story co-op and 6-player arena-based battle modes.

There are currently two ways to play this game.  The original Saturn release continues to be one of the pricier U.S. releases, but can be found regularly on sites like eBay for $75-$100 or more for a complete copy. Those looking to play it on original hardware who have import capability might do better to track down a Japanese copy of the game, as the import is relatively easy to play without knowing Japanese.

The second (and cheaper) option to play the game would be to download it for the Xbox Live Arcade.  An “enhanced” version of the game with “updated” HD visuals, online co-op, and 12 player multiplayer was released in the Fall of 2011. The port has received generally favorable reviews, and the “remixed” version adds new content and gameplay tactics that aren’t found in the original.

As was the case with Gunstar Heroes, Guardian Heroes also received a sequel on the Game Boy Advance entitled “Advance Guardian Heroes.” Unfortunately this sequel was not as well received: the game is faster paced but lacks the variety and depth of the original.  Furthermore, it suffered from some framerate issues that traditionally are absent from most of Treasure’s other games. It is still worth a look for fans of the series, however, and can usually be found for a relatively low cost.

Want to discuss these Treasure titles, their influence on later games, or set up some online matchmaking via XBLA in Guardian Heroes? Instead of posting in the comments sections of this post, please join us in the forum to discuss the game!

I like how the Gunstar Heroes recommended ports section mentions the XBLA release, the PSN release, the Steam release, the PS2 SEGA AGES release, the iOS port (!!), and the Japanese 2004 PC release and completely fails to mention the most popular and original digital release (maybe on purpose?).

The game came out on Virtual Console back in 2006 with perfect emulation… It topped the charts and is the most widely-owned version of the game available outside of MAYBE the cartridge. Doesn’t it deserve a mention? :/

It’s how I first got my hands on the game… You even mention the Game Gear version and not this one. How weird.