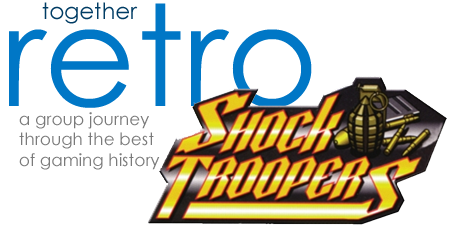 The overhead run-n-gun in the arcades has taken on many forms over the years. Starting with Taito’s 1982 release Front Line, there has been no shortage of games with the theme of a singular character taking on an entire enemy force. Capcom’s 1985 contribution, Commando, modernized what Front Line originally established, and a company called SNK would put out its own take with Ikari Warriors one year later. Many more games in this style followed throughout the 1980s, but what we have this month for Together Retro is a game that is a modern take on this classic formula. This is Shock Troopers, released in 1997 by Saurus for SNK’s Neo-Geo arcade platform.

A terrorist group known as the Bloody Scorpions have kidnapped an unnamed scientist and his granddaughter Cecilia to gain access to a drug called Alpha-301 which turns regular people into superhuman killing machines. It is up to the Shock Troopers, 8 characters in all, to rescue her and defeat the BSG.

Shock Troopers is a 90s take on the classic run n gun. You can play in one of two ways. Lonly Wolf is simply what represents the run-n-gun as we know it; one player against everyone else. Team Battle lets you select 3 of the 8 characters and allows you to switch between them at will. However, you will get a few more of the character’s signature special weapon in Lonly Wolf mode. Depending on the version of the game, you will have either 1 life with a longer health bar which allows you to take a few more hits or 3 lives with a smaller bar in which taking more hits drains it faster. You can also choose your path at the beginning of the game, selecting either the Mountain, Jungle, or Valley routes. These routes will feature different stage layouts, but the bosses and enemies will be similar. At the game’s halfway point, you can also keep the route you are currently on or switch to one of the other two.

In addition to each character’s standard weapon that has unlimited ammo, various other weapons including heavy machine guns, 3-way shots, flamethrowers, and more can be found, but these have limited amounts of ammunition. Holding down the A button allows you to lock in your current firing direction, making it almost like a strafing feature found on first person shooters.  Button B allows you to perform an evasive roll maneuver that can prevent you from getting hit.  Button C enables your special weapon attack, exclusive to each character that have different effects. Button D will switch between the characters in Team Battle mode. Each character can also perform melee attacks by hitting button A when they are close enough to the enemies. Successfully executing these melee attacks will drop items that score additional points, weapons, or health.

Shock Troopers was originally released to the Neo-Geo MVS in the arcades. It appears on SNK Arcade Classics Volume 1 released in 2008 for the PS2, PSP, and Wii. This version has been reported to have slowdown issues on the PS2 and PSP ports. In 2011, it was released to PSN. It was also released on the Wii’s Virtual Console to all territories in 2012.

The game was popular enough that a sequel was released in 1998, called Shock Troopers 2nd Squad. In this game there are only 4 characters with different abilities to choose from and there is no team mode. The graphics have more of a cartoon animation feel and you are able to enter and use vehicles. There are also only 2 routes to choose from upon completion of the first stage. Your standard weapon can be powered up, and special weapons and those inside vehicles can be charged up. This game’s only port was released to the Wii’s Virtual Console in 2012.

Please join us on the Shock Troopers forum thread for further discussion.