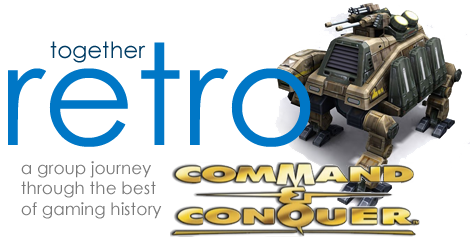 This month’s Together retro title is Command & Conquer (C&C), from developer Westwood Studios which was responsible for a lot of quality classic games (such as the Eye of the Beholder series). They basically created the genre of Real Time Strategy (RTS) with Dune II, released in 1992 (although there were earlier pioneers such as Herzog Zwei which was a big source of inspiration for Westwood).

After Blizzard’s own defining Warcraft (1994), Westwood Studios revisited the genre in 1995 with the Guiness-record selling C&C, initially released for DOS, but was ported to many consoles and released for Windows 95 as C&C Gold.

Command & Conquer comes quite close to being a much refined sequel to Dune II, without the license: The interface is very similar; power plants sustain the operation of your other buildings; Tiberium, which is central to the game’s story, replaces Dune II’s spice Melange as the single resource and is collected by slow, unarmed Harvester units (which can nonetheless run over careless infantry units).

Like many RTS games, most of the single player missions involve building up a base, gathering resources, and producing your army to destroy the enemy. More advanced units can be constructed if you have specific buildings, which in turn have their own requirements to be built, constituting a de facto tech tree reminiscent of the ones that appear in games like Civilization.  The game has two factions, the UN-funded Global Defense Initiative (GDI) opposing the cult-like Brotherhood of Nod. The story was mostly conveyed through full motion video (FMV) cutscenes with live actors, which included the briefings for the missions. In these, the charismatic leader of the Brotherhood, Kane, is played by developer Joseph Kucan.

It also features a very memorable soundtrack created by Frank Klepacki which really contributes to the overall C&C experience and that you can listen to in his website – http://www.frankklepacki.com/ .

A very significant innovation of C&C is that the two factions are very distinct (the differences between the 3 factions in Dune II were small and mostly on the end-game units, and despite significant visual differences in Warcraft most Human and Orc units were effectively equal). The GDI has more traditional military units with some emphasis on tanks, eventually getting access to the Mammoth tank and the Orca gunship, as well as having airstrike and later ion cannon support. Nod often focuses on less conventional tactics, featuring units such as the Stealth Tank, flamethrowers and the emblematic defensive structure, the Obelisk of Nod.

Very noteworthy is that the Multiplayer was considerably focused on by the developers, which was somewhat advanced for its time. The game supports up to 4 simultaneous players, playing over modem, and the GDI and Nod single player campaigns were put into 2 CDs despite fitting a single CD, which enabled a 2nd person to play out of the box.

Like Dune II and Warcraft before it, C&C was a seminal RTS game that was extremely influential in establishing the genre. The original C&C was very popular and spawned a prolific franchise, with several titles and respective expansion packs including direct sequels (with C&C 4: Tiberian Twilight released in 2010), C&C: Generals, the first person shooter C&C: Renegade, and the World War II alternate history inspired RTS offshoots in the Red Alert series. The franchise has more than one Guiness record beyond the original sales record, mostly due to its longevity.

The game was ported to the consoles of that time. The N64 port has slightly changed graphics, but given the audio is MIDI and the video cut-scenes are not included due to the size limitations of the cartridge format it is not recommended. To note, between the Saturn and Playstation ports the latter has 5 exclusive levels. The recommended version to play has to be the Windows version, C&C Gold: it supports higher resolution supported compared to the DOSoriginal and mouse and keyboard controls are just very well suited for RTS games. Furthermore, it has been made freeware. You can download it directly from Electronic Arts

However if you would like to play more of the C&C universe, Command and Conquer First Decade features every title in the series from C&C Gold to Generals Zero Hour (sans the online title Sole Survivor), and is often sold for $15 on sites like Amazon or Ebay. First Decade recently had a fanpatch that fixed alot of the issues that the included games had online and added in some more modern game enhancements (like 1280×1024 resolution and all the console exclusive maps for C&C Gold). 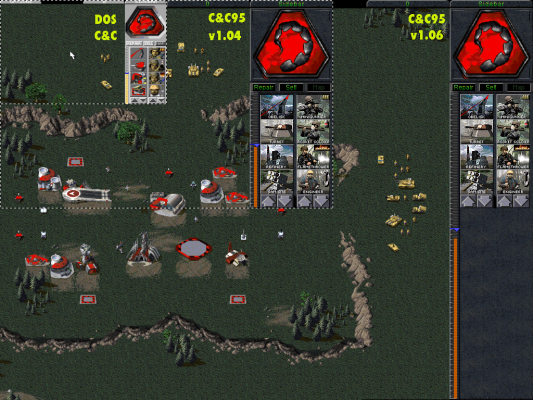 Want to discuss strategies, install issues, or even try to get matched online with someone? Instead of posting in the comments sections of this post, please join us in the forum to discuss the game!