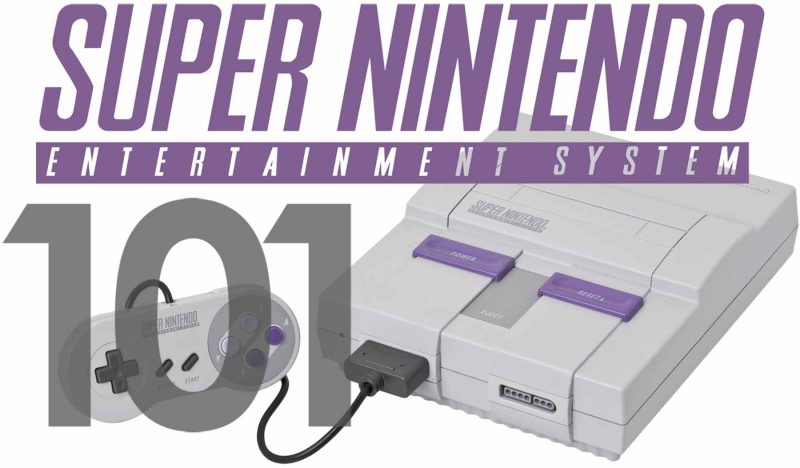 The Super Nintendo Entertainment System (SNES) was one of the big players in one of the most heated console wars of all time and remains as one of the most treasured consoles of all time. Its robust game library and high nostalgia level make it commonplace in a classic gaming collection. This guide should help classic Nintendo newbies jump right in and long-lost SNES owners find their way back to their former love.

I want to thank racketboy contributer, Integrity for piecing much of this guide together and those other members on the forum that helped list points of interest for this post as well.

Very informative. Thanks! I’ve only had a SNES for less than a year and didn’t know some of the stuff you mention existed. I’m definitely going to get a Super Advantage controller now.

Great read, I can’t think of anything to add to what has been posted. Although you should have stressed how fowl the NTSC SNES looks. Seriously as a PAL I am so pleased that I didn’t have to play my game on that thing.

I love the SNES, been playing through some classics lately. I’m 99% thru the original Donkey Kong Country. ><

Just wondering if all the releases of the SNES 2 (in the U.S. at least) came with Yoshi’s Island? I remember getting the console when my original SNES broke down, but don’t remember any games with it. I only ask because I wonder if I was getting screwed out of playing one of the best platformers until last year.

Why is the super advantage layed out like that when it could have had a 6 button arrangement?

I knew nothing about the Satellaview; that’s awesome! I want one now, of course. Too bad they didn’t keep it running longer, hmm? 😉

Actually, many of the slow title screen loads and start-up times, not to mention mid-game loads, are due not so much to the slower CPU but the fact that the CPU must be idled to read from the cartridge (I think this can be circumvented under certain circumstances, however).

The system was able to, in most cases, was able to reproduce more accurate arcade experiences (primarily Street Fighter 2) that the Sega Genesis.

im not sure about that at all, it could reproduce the colours of later generation arcade games better but the mega-drive (genesis) is much better at handling the speed and sound (with the fm synth).

Agreed, the Megadrive version of SF2 ran much much faster but I think on the whole the SNES did have the edge on most games when it came to graphics.

“Just wondering if all the releases of the SNES 2 (in the U.S. at least) came with Yoshi’s Island?”

No, it was selective.

“That’s wrong, RGB is a lot better than svideo and the SNES supports it.”

As I understand its a weird sort of 21-pin adaptor made for some specialised TVs in Japan, not the basic ones used in modern TVs.

“Nintendo did not originally intend to make a successor to the successful NES, but as Sega’s Genesis/Megadrive started picking up steam and Nintendo saw its numbers slip in the market, this sparked the planning of a new console.”

Don’t forget Hudson’s PC-Engine! In Japan it actually did much, much better then the Megadrive, so much so that Nintendo considered it its chief rival there.

General addedum: finding SFC games is usually cheaper then SNES games, and as mentioned, a simple mod allows them to be played. Though, finding complete/excellent or better of either games is still tough and fairly pricey. Though if you’re just playing, carts can be horribly beat up and still work – they are VERY durable.

The multitap only allowed up to five players and was supported by a large slew of sports games and a few oddball games aside.

you mentioned that Bomberman and Secret of Mana are the only games utilizing the 6 player option. Just so you know, Captain America and the Avengers is also a six player game. THANKS!

> As I understand its a weird sort of 21-pin adaptor made for some specialised TVs in Japan, not the basic ones used in modern TVs.

Or plug into any RGB SCART telly in Europe, cables easily found on ebay or you can make them yourself (Google for console scart pinout). Americans might find a TV with RGB component inputs.

Great article, though I think it should be noted that Nintendo did not loosen their censorship stance after the ESRB came into effect. Games like Mortal Kombat II and Lethal Enforcers were released onto the SNES with self-imposed age ratings on the box.

I think it’s more accurate to say Nintendo loosened their stance a bit after the graphically inferior Mortal Kombat on the Genesis did so well thanks to the gore remaining in that version.

Love the SNES. I remember having an earlier model and it had a nasty little design flaw. The power cable hooked onto a piece of plastic that stuck out of the back. One day someone stepped on the cord and it broke that piece right out. It was such a pain that I just got rid of that one and bought another for cheap (which had a recessed spot for the plug).

Interesting you suggest an action replay for imports. I just removed the tabs out of the inside with a chisel and hey presto, it works lol.

I do not think you fully understand what it means,but you sure about that,Sewart?….
Nintendo wanted to create a CDRom drive for their Snes only and unicaente to compete with the Sega in first,by the Sega CD / Mega CD,for compete with the new wave of interactive video games FMV launched by Sega CD,and then with the Nec PC Engine CDRom2 / TurboGrapX-16 CD-Rom,to the idea of ​​technological innovation based on CDRom support,followed in turn by Sega, with the Mega CD / Sega CD.
In the end they did not succeed and some went the PlayStation, but that’s another story!

I’m hoping to update it in the next few months 🙂 But thanks for the specific points to focus on — that does help!
If you even want to pitch in as a contributor, just lemme know!