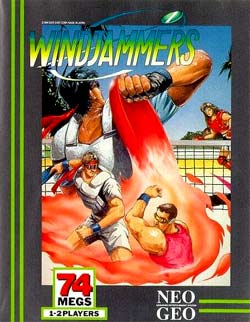 While the Neo-Geo may be primarily known for its great library of 2D fighting games, the powerhouse system also has a number of unique games that are filled with great gameplay. Windjammers (aka Flying Power Disc in Japan) is not your typical SNK game, but it is a wonderful sports-like title that is one of the best competitive 2-player games.

While it is not a fighting game, Windjammers’ Frisbee-flinging battle action does vaguely barrow certain elements from traditional fighters and combines it with a hybrid tennis/Pong-type game. This may sound a bit odd, but if you give Windjammers a chance (especially with 2 players), I’m sure you will enjoy yourself.

Graphics/Presentation: 6
If you are familiar with the newer Neo-Geo games such as Metal Slug 3 or Fatal Fury: Mark of the Wolves, Windjammers will stick out as obviously early Neo-Geo title. It doesn’t look bad, but it definitely has the look of an early 1990’s game — much like the first generation of Sega Genesis did. During this period, SNK still hadn’t quite found that style that gave
them personality in their later games.

The colors in Windjammers are vibrant and give some life to the game’s visual appeal, but there is nothing that will “wow” you. The backgrounds are only as interactive as the game required and the sprites aren’t very dynamic. However, Windjammers provides a good atmosphere with a well-animated crowd and other little details.

The attack effects like fire, electricity, and other power artifacts are interesting, but there’s really nothing groundbreaking as Windjammers only makes a small use of the Neo’s scaling effects. It would have been great to see SNK produce a Windjammers 2 in its later years on the Neo-Geo just to give it a boost in the aesthetics department, but I appreciate the fact that they focused more on gameplay.

Sound/Music: 6
To be honest, the music in Windjammers is forgettable. In fact, I can’t really remember much of it. This is neither good or bad as it seems to blend in with the game without getting on your nerves.

The sound effects are fairly impressive for an early Neo-Geo game. The thump of the frisby hitting your player startle you and goals are greeted by a blaring whistle and screaming fans. For some reason, I also enjoy the female announcer’s voice with the Japanese accent. 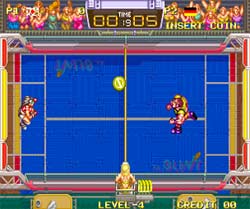 Gameplay: 8
The gameplay of Windjammers is obviously inspired by Pong (with an Air-Hockey feel to it), but adds some great elements in order to make it more attractive to modern gamers. The premise of the game is basically playing a tennis-like game with a Frisbee.

Two players go head to head to try to throw the Frisbee past the other player. You receive 3 points for hitting the large center target and 5 point for hitting the smaller upper and lower targets. The areas are walled in and some courts have other barriers added to them. These allow you to bounce your disc creatively to fake out your opponent. This adds a great deal of strategy and the necessity for quick reflexes.

Matches are divided into three sets and are very fast-paced, lasting about 30 seconds for each set. The player with the most points at the end of the set, wins that set and the best of three sets wins. This takes a cue from tennis without drawing the game out, but instead keeping the game fast.

You will also find that there are three types of throws in Windjammers. You start out with a standard throw and a loft – which throws the disc into the air. If the Frisbee lands before your opponent can catch it, you score 2 points. The danger of throwing it up in the air, however, is that your opponent can perform a super throw if they get underneath it in enough time.

Super throws can be very difficult to stop, as the have a tendency to perform gravity defying turns in mid-air. Even if you get in front of a super throw, often times the momentum will carry you back into your goal.

As with many other sports-related games, defending your goal is just as important as scoring. You have 2 basic defensive moves — the commonly used dash and the oft-important block. By blocking a shot, you will knock the Frisbee into the air, which if executed correctly, can set you up for a super throw.

The game’s AI is very good, so Windjammers will provide quite a challenge if you are playing on your own. However, I feel that Windjammers really shines when you play the game with a friend. My wife and I both found the game to be very easy to pick up and had enough depth and strategy to keep us wanting to play “just one more round”. The feeling was very similar to games such as Mario Power Tennis or Virtua Tennis.

If you do choose to go the single-player route, you will find some great minigames that will give you a break from the normal competitive gameplay. Its always nice to have a little variety — even if the normal game is solid. 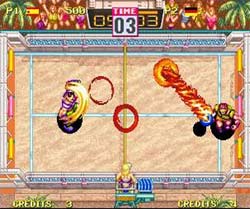 Control: 8
If you’ve played Pong, you know Windjammers. It’s simple, yet extensive, controls only add to the basic gameplay. And since you can pick up the controls instantly, your attention is devoted to gameplay. There are only two buttons, which results in simple yet effective controls.

Overall, the controls are tight, allowing your players move accurately and quickly to your destinations. Unfortunately, the controls seemed about a split-second too slow, resulting in a small amount of frustration. This would be my one other improvement to be made on a theoretical Windjammers remake/sequel.

Affordability: 6
At a few hundred dollars, the AES cartridge for Windjammers isn’t especially affordable. However, the Neo-Geo CD version can be around the $30 range if you’re willing to deal with the added load times. Of course, emulation is also an option. MAME and Neo-Geo emulators are available for the PC, XBox, and the Dreamcast. I’ve recently been playing Windjammers on Neo4All AES on the Dreamcast and it plays perfectly, as far as I can tell.

Overall: 7
Windjammers is a must-have for Neo-Geo owners and worth emulating if you don’t have the system. There is enough technique in Windjammers to keep hardcore gamers happy and it is simple enough to be inviting to casual gamers.

I hinted at it before, but modern games such as Mario Power Tennis

seem to be influenced by Windjammers — especially when you consider the power moves. So if you enjoyed Mario Power Tennis or (probably to a greater extent) Mario Tennis: Power Tour

for the GBA, I think you will greatly enjoy Windjammers.

Similar Posts From These Categories:
SNK

This is one of my favorites! Of course, my NEO-GEO experience is limited, at best… but I played this in the arcade a bunch! Finally, someone’s giving Wind Jammers the props it deserves!

Wandjammers was one of my favorites back in HS. While I’d always get whupped at the traditional fighting games, this one gave me a chance to get frisbee revenge. Too bad nobody else wanted to play it.

I have this on my MAME cabinet and love it to death. I’ve actually gotten a couple of my friends hooked on it when they played.

Get a few friends into this for 2-player battles, and this game is like crack