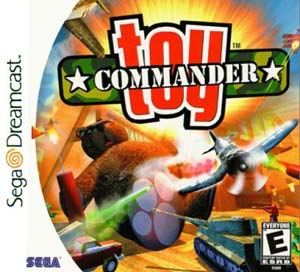 Inspired by the classic Micro Machines games of the 8-bit/16-bit eras with a touch of Pixar Toy Story feel, Toy Commander was one of the first quirky Dreamcast games to hit the market.

While there isn’t one individual aspect that makes Toy Commander stick out, it is very well-rounded in terms of presentation, attention to detail, and addictive gameplay.

Toy Commander also has the personality and charm that keeps the title in the minds of experienced Dreamcast fans around the world.

Special Note: I found this interesting interview with Toy Commander’s developer that occured shortly after its release. It’s cool to see how excited he was about the potential of the Dreamcast.

Review Tidbits:
“The game takes takes its innovative theme and runs with it, and you’ll get an instant kick out of how clever the design is. For each level, missions take place in a particular the room, such as the bedroom or the kitchen, but you’d swear you were in a totally different world. This is thanks largely to the fact that each mission is distinct and creative, from recapturing defectors with your personnel truck to making hot cocoa with a helicopter and a jeep. I just can’t tell you how friggin’ cool it is to go through a mission and actually feel like you’re a race car driver or a fearless fighter pilot, all the while knowing that you’re in a fully realized house, and that you’re just a toy. This game just oozes personality, and you’ll instantly fall in love with the killer atmo 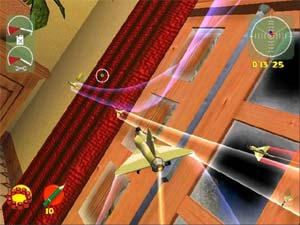 “Great graphics and superb attention to detail are the first two things that will grab your attention. Thankfully the frame rate is consistent, with rarely a hint of slow down. The game is also enjoyable to play. From the simple initial tasks such as boiling some eggs by pushing them into a pan using a truck, then turning on the cooker with a plane, to more difficult challenges where the solution isn’t immediately obvious, the game has a great learning curve.”
PlanetDreamcast

“Since the game takes place in a toy world, missions are made more interesting and unorthidox. From deoderizing smelly sneakers to guiding the migration of oregami birds, Toy Commander is an interesting contrast to the relentless hordes of generic army game assignments. The variety in missions is sometimes astonishing, as the game guides you through everything from fun exploratory romps to intense shoot-outs to amusing mini games. Versatility is definetly one of Toy Commanders most essential weapons.”
Defunct Games 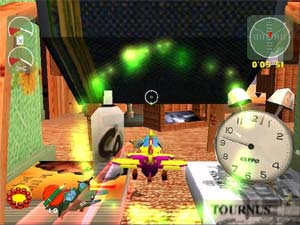 “In addition to the training and one player mode is the insanely addictive multi-player deathmatch where up to 4 players can battle it out via splitscreen. No noticable framerate drop either or loss of detail either. There’s several multi-player modes like Cat and Mouse and Capture the Flag, but I prefer the Deathmatch. The key to having the most fun with the deathmatch is to limit the number of kills down to about 3 in the options, so the matches dont drag too long.Me and a friend couldn’t stop playing! You can play the deathmatch for hours! Many of the toys you used in the one-player can be used here. Couches, chairs, tables, and vases become strategic hiding places for you to set up your enemy for the ambush. You always know where your target is by a colored arrow. As soon as you have your target in your sights, a colored “X” appears over them and blast away. When your toy gets destroyed, you can switch to another one and continue the battle!”
Hardcore Gaming

This is one of my favorite games of all time! It has a trillion things going for it. Awesome levels, amazing graphics, a killer soundtrack, the versatility of the levels adhere to any attention span, and it’s so interactive that you have to keep coming back for more. This is one of the few great ones I picked up back when the Dreamcast was alive… or at least not kind of the Undead Console it is today. (10 year olds don’t have the best taste in games. Although it was difficult to go too horribly wrong with the Dreamcast library.)

Awesome game for sure. I instantly fell in love with it the first time I popped it in my DreamCast.

Reply
Pingback: The Best Dreamcast Games Under $15 – RetroGaming with … – fzknu