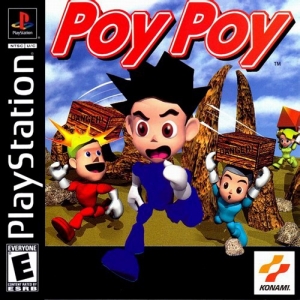 Before there was Power Stone, there was PoyPoy. If you are familiar with the fully 3D fighting gem on the Dreamcast, you will see a few similarities in this early Playstation title.

Because Poy Poy was released in the early stages of the Playstation’s history it does have some blocky graphics and subpar sound. But the gameplay is relatively good. While I wouldn’t recommend it over Power Stone, I thought it would be nice to take a look at what others had to say about this quirky party game from Konami.

Review Tidbits:
“When you start the game, you have a choice of championship mode, versus mode, option mode, memory card mode. In championship mode, you choose a character, each with there unique stat’s. (speed, power, special attack, ect) Once you pick a character, you choose your special attack. Roughly around 20 special attacks ranging from whirlwinds, homing bombs, poision bombs, boucing objects, and more. They all start on level 1 — when you play more with the character and his/her special attack, they level up and increase either range or power of the attack…Each stage has there unique twist. The ice stage has players slippin’ to throw items, the city stage has a giant egg; once it hatches it turns into a large dinosaur which follows you and tries to eat your player!”
SpecialAttack 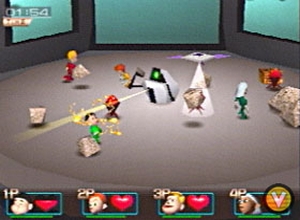 “Poy Poy’s game premise is extremely simple. Move around an open arena, pick up an object, and hurl it at one of your opponents while trying to avoid being hit by any objects they may throw your way. Sounds too simple, doesn’t it? Fortunately the gameplay is a little deeper than that…Party games are currently few and far between on the Playstation. Poy Poy is an excellent addition into this category, and it’s good to see the multi-tap getting some non-sports use. If you don’t have, or don’t intend to buy a multi-tap, take a careful look at this title. The 2 player mode is fun, but I don’t believe it reason enough to purchasethis title, as it’s not anywhere near as engaging as playing with 3-4 people..”
VidGames

“It is very hard to control your character, that includes maneuvering and throwing. After the battle, the scoring system usually will rule you out even if you are the last man standing at the end of the battles due to the crap controls, etc. You might as well just run around during the battles and try dodging everything that comes at you.”
BeeDub @ GameFAQs