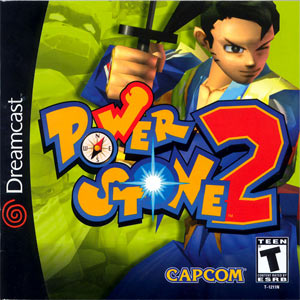 The original Power Stone was one of the most exciting launch titles on the Dreamcast. It built on many of the arena fighting concepts established by Poy Poy on the Playstation.

Power Stone was also Capcom’s first successful attempt at bringing their quirky by killer style of fighting to the third dimension.

Power Stone 2 takes everything from the original and turns it up a notch (or two). Most noticeably, the game now supports four players for a completely chaotic experience.

Review Tidbits:
“The second installment in the Power Stone series takes all the basic ideas of the first and makes them bigger and better. If you loved the first one, brace yourself, because you’ll go bonkers over the sequel.

The first Power Stone made its mark as a fighting game by placing more of an emphasis on using weapons and the environment than the traditional combos and super moves. The style of Power Stone 2’s gameplay is exactly the same as the first.

All of the fighting takes place on massive, multi-leveled stages. For example, one stage begins atop a giant airplane, switches to an aerial battle, and then finishes on the ground. With the possible exception of Dead or Alive 2, fighting on multiple levels has never been better.”
Game Revolution 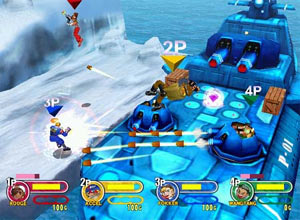 “The good news is, if you’re looking for more of the same, you’ve found it. The 1-on-1 action is pure Power Stone. Combat areas are still as interactive as ever, allowing you to yank poles out of the ground and whack your opponent upside the head with them. The lush graphics and fluid frame rate are still present and accounted for. And most importantly, the battle for control of the Power Stones, which unlock god-like abilities in your character, is still the center of attention…

Controls are solid, which is to be expected from Capcom. The game plays equally well with either the standard controller or the Arcade Stick. Since Power Stone 2 is not a joystick/button combo intensive game ala the Street Fighter series, the analog stick will do just fine for most players. Part of the game designer’s mantra seems to have been “keep it simple, stupid”. There is only one attack button, and when rapidly pounded upon it will help you smite your enemies. Picking up and using objects, even busting out super moves… it’s all incredibly simple to do.”
PlanetDreamcast

“The graphics are roughly the same as the original Power Stone’s, but since you’re seeing more fighters onscreen, the characters are a little smaller. Also, because of the wild backgrounds, the action moves along at a much faster pace. But even though the game is even more action-packed than the original, the backgrounds add a lot of strategy to the game. Now, you don’t simply hop around small levels kicking each other in an attempt to collect all three power stones. Now you’ve got to think about where you’re going to land, as well as which harmful obstacle you can knock your enemy into next. There is so much going on in a four-player battle that collecting the power stones takes a backseat to just constantly beating up one of the other three characters.”
GameSpot 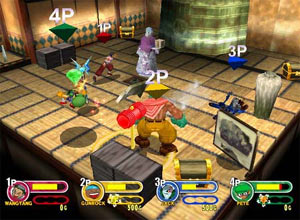 “The biggest star of the game however is the four-player mayhem. Worlds above the dual fare in the original, a screen full of your busy buddies is more fun than you can fathom. Teamed up in cooperative mode or duking it out in a free-for-all, the action is fast, furious, and almost always a different experience each time throughout. Creating alliances, rivalries, and outright brawls is only as limited as your aggression. Party game extraordinaire, Power Stone 2 can keep even the most picky of gamers on the tips of their toes for hours on end.’
IGN

If you want to get free dreamcast games its simple..buy a buncha of blank cd-rs with up to 700mb .. it doesnt play dvds maybe1 of the biggest mistakes mad by dreamcast .. ok well anyway check out on youtube how to burn dreamcast iso files onto a blank disc they have practically every game for free .. im done payin for them they shuld all be free anyway