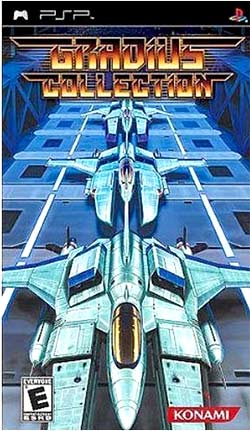 Even though I’m not particularly interested in the PSP as a whole, it does have a handful of redeeming retro games under its belt, and as I elluded to earlier, Konami’s headlining shmup series is one of the latest additions.

Gradius Gaiden is the most annticipated shooter out of the bunch since it gathered such a cult following on the original Playstation.

This special disc also includes a gallery mode to listen to the thumping soundtracks from every game and the ability to view CG movies of the Vic Viper in action.

While most shooter fans already know these games are good in their original form, lets take a look at what the critics think of this portable compilation.

Review Tidbits:
“Gradius Portable comes with a couple of extras like intact intro videos from the PS1 Gradius Collection and Gradius IV’s video. You can also adjust the screen to use the PSP’s widescreen format or revert back to a standard square with borders. To make the game truly portable Konami added in a quicksave feature. Players can save the game at any time by pausing the game. Since there isn’t a limit on how many times you can reload you can avoid some of the frustrating by reloading every time you die. Another neat feature is you can alter the wait time in the options menu. This is essentially a way to alter the amount of slowdown in the game. Unfortunately, even at wait time zero Gradius III still has severe problems.”
Siliconera

“Konami have made a considerable effort in porting all of these games to the PSP. The main menu is superbly presented and features a Gallery section where CG movies and soundtracks for each game can be checked out, including the wonderful Sharp X68000 tunes for the first two games. The ports themselves are faultless, being based on the previous Gradius Deluxe Pack and Gradius III & IV home releases. Meanwhile, Gradius Gaiden is also identical to the PlayStation original but is shorn of its simultaneous 2-player mode for obvious reasons. ”
NTSC-UK

“In terms of overall presentation, the games look fantastic. You can play them in their original aspect ration or stretch them out to fit the 16:9 widescreen PSP screen. However, there are a few problems with screen blur that cause some enemy bullets to become nearly invisible. Oddly enough, you’ll find this happens less when you change the aspect ratio to widescreen, but in this mode, the games themselves look distorted, so it’s a catch-22 of sorts. In either case, the problem is a degradation of image quality, so it’s really your call as to which view you find to be the lesser of two evils. The game’s are playable, regardless, and the visuals still look kick ass in the end, but screen blur is a consistent problem that manages to rear its ugly head in each of the five titles.”
Deeko

“Gradius Collection has very few flaws working against it. Despite the fact some entries are missing, the collection here is still varied and show how much the series has evolved over the years. The number of options and bonus goodies that are available are nice, and the jam-packed action of the games themselves should enthrall fans of the series and gather up a flock of new ones along the way. This is simply a must-have retro collection that should keep you plenty busy until the PS3 Gradius that’s been hinted at arrives.”
Modojo

“Whether you are playing them for the first time or playing them for the millionth, the games in Gradius Collection are, for the most part, some of the best side-scrolling shooters you’ll ever handle. Emulated without any noticeable problems and benefiting from a nice selection of extra options, the software here is great fun. A lack of multiplayer support in the titles that used to have it and a few missing sequels does leave us a little sad, but for a series that’s more than 20 years old, Konami’s entertaining set is more than worth its price.”
IGN

I own this compilation and the ability to save any time means you can play any of the games at any difficulty and still finish all 5 off them without too much frustration.

Has a lot of nice add-ons. I got my copy for under $20 bucks, so at that price point I consider it a must own title for the PSP if you are a fan of shmups.