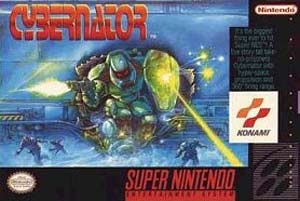 Cybernator (aka Assault Suits Valken in Japan) game is an intense side-scrolling, mech shooter that takes you through a steep difficulty curve. In this shmup, your ‘Assault Suit’ can jump, thrust, dash, punch and use various weapons to do your damage. Control is great (but different) with a real ‘chunky robot’ feel. Cybernator boasts many original features and the mode 7 explosions throughout are huge, frequently filling the screen.

While there are more modern incarnations of this game like Assault Suit Leynos 2 on the Saturn and the PS2 remake of this very game, I thought we should take a look at one of the most underrated SNES games and a mech-based game that has aged quite well.

Review Tidbits:
“Cybernator is playing in the same league as Konami´s other action games like Super Castlevania and Contra 3, but at the same time it´s very different because the emphasis of the game is laid more on strategic thinking and accurate shooting than on quick reflexes and fine tuned jumping skills… The thing that makes Cybernator so special is the shield that makes this game less hectic than other action games. Instead you must study each enemy and learn t 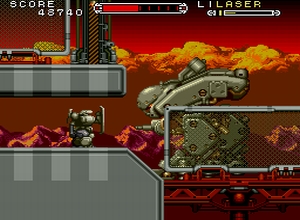 heir patterns so you know when to take down the shield and attack and when not to. ”
Nintendoland

“Graphically wise, Cybernator is impressive, using a good amount of rotation and scaling (especially on large explosions). There aren’t as many “whoah” effects, like with Axelay or Gun Hazard, but they get the job done. There’s also a great amount of animation and attention to detail, like lots of metal frameworks, dust blowing back from your jetpack, your gun spewing spent shells, shots digging holes in walls, enemy pilots running around underfoot, etc. Even though the small communication portraits were removed from the U.S. release, anime fans may be surprised to hear that the infamous Satoshi Urushihara did character designs. Soundwise, it’s good music, I can tap my toes to it, but others hate it. Sound effects are also good quality, and don’t grate. Gameplay may feel “heavy” to some, but this is a giant robot we’re driving, not some nippy fighter or muscle-bound commando. Konami was also smart enough to put in a “lock” button, so that you can keep your gun pointed in the correct direction during zero-G combat.”
SHMUPS!

“The most unique hook to Cybernator is that it contains three different styles of play. A good portion of the time, you’ll be in areas bound by the laws of gravity, in which you must dash around and hover in attempts to outwit your foes. Unsurprisingly, these sections make up the majority of the game. Other times, you’ll be in zero-g zones where your assault suit is free to float about the countryside, giving you chances to explore more drastic landscapes. Lastly, there are a few segments of “forced movement” that resemble something out of Gradius. These exist for the sole purpose of setting up some awesome action sequences, like weaving about a sky rife with bullets or blasting through an asteroid field.”
Bluberry @ GameFAQs 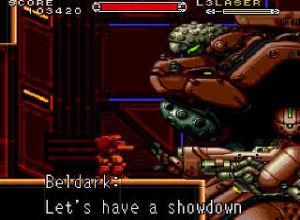 ” The first thing that may put gamers off is the control scheme. Your mech is a bit clunky and isn’t completely responsive (although this is what you’d expect from tons and tons of walking machinery.) Plus there’s the aiming mechanism. Each tap of the control pad up or down will move your gun a slight bit. This makes for very precise shooting at various angles, but if you want to go from shooting downward to upward, you’ll have to wait a few seconds while your mech’s arm gets back into place. Another thing you’ll have to get used to is using the “hold” button (L button is the default.) In this case, you can aim your gun in a certain position while moving in different directions. This is a skill you must master if you want to win the game.”
HardcoreGaming 101

Well, at least you guys got the game with the semblance of a romantic background story. IIRC any mention of that was yanked from the EU release (one of the reasons I’m extremely wary of the Wii’s “localized”, RC-locked Video game ROMs).

AFAIK, the game is supposed to be really shoddily localized – they seem to have ripped out huge parts of the plot and raped the ending.

Re: accessibility, the game is nearly unplayable without a Joypad IMHO. Don’t try to play it in an emulator without a Joypad, since it wouldn’t do this game justice. Other than that it’s pure genius, I found it a bit on the challenging side, but nonetheless really fun.