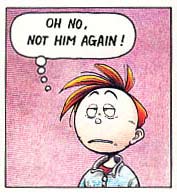 Even though I was a Sega fan once the 16-bit era kicked in, I still enjoyed flipping though issues of Nintendo Power. Back in its early days the magazine did a great job of keeping my age group interested and entertained.

The magazine was edited at first by Fun Club “President” Howard Philips, an avid game player himself. Nintendo Power‘s mascot in the late 1980s and early 1990s was Nester, a comic character created by Philips.

After Philips left Nintendo, a more “teenage” Nester became the magazine’s sole mascot. Early issues of the magazine featured a two-page Howard and Nester comic, which was later replaced with a two-page Nester’s Adventures, which was then reduced to one page, and then dropped altogether.

If you missed these comics, or would just like to take a trip down memory lane, there is now a full archive of the Howard and Nester comic strips from the Nintendo Power magazines.

Similar Posts From These Categories:
Nintendo

Ok that is awesome. I was thinking about these the other day after perusing through my old Nintendo Power collection

Anyone know what actually became of Howard Phillips?

The artist who did the earlier strips also did a lot of the illustrations in the NP Dragon Warrior Strategy Guide. What was his name? He was awesome.

Howard Phillips was hires by Bullet-Proof Software. I have no idea where he is now.