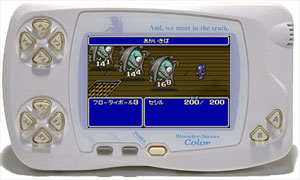 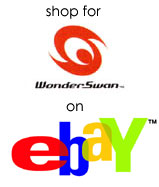 Reply
Pingback: PoisonMushroom.Org - Combing the Net So You Don’t Have To » Blog Archive » Points of Interest - 7/7/07

I absolutely love those pieces! Excellent work, once again.

By the way, racketboy, are those auction links ads that you get some sort of compensation from? If not, I was gonna recommend simply using text links to do general searches on various systems. eBay URL hacking is pretty simple.

I get a commission 🙂
Thanks though!

Almost missed this 101 guide. My wonderswan final fantasy limited edition system purchase was only for collecting purposes cause the FF1 in jap is really unplayable. But after seeing the shmup video and quite impressed and will try find and buy a few games that could be playable. There should have been a list in there of recommended games for non-japanese speaking gamers.

The WonderSwan Color kicks-ass. I have one with Super Robot Taisen Compact, Inuyasha Fu’un Emaki, and FFIV.

Visit my shrine to the Wonderswan @ http://www.freewebs.com\wondershrine

Well, we kinda lumped both the original and the color together into one guide….

Judgement sulversword is going for crazy prices!!!!!!!! I think i need to learn kanji…