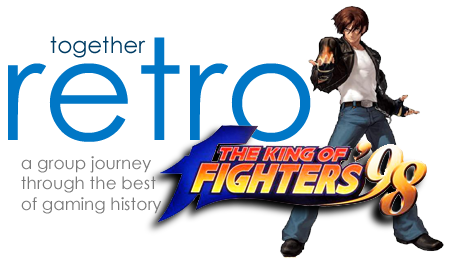 Presented by Fastbilly1 and Racketboy
New To Together Retro? Check out the introduction to the club

Considered by many to be one of the best 2D fighters in existence, King of Fighters 98 is a unique title in the King of Fighters series.  Since the Orochi saga had concluded, SNK decided to focus on the multiplayer aspect of KoF98 as best they could.  They ironed out most of the issues that had arisen from the previous titles and delivered to gamers everywhere one of the most solid and balanced fighters of all time.  Still providing 3 on 3 combat, and bringing back characters dead in the storyline, KoF 98 is a top tier fighting game, still used as a tournament game on some circuits.

So this is where things get confusing. In 1998 SNK released one of those rare nigh flawless games in King of Fighters 98 (hence forth KoF 98).  Originally released on the Neo Geo MVS arcade system it was quickly ported to its home console brother and eventually the PSX.  A year later they changed the name to 99: Dreammatch and released it on the Dreamcast.

SNK had been releasing a King of Fighters game yearly since 94 and they had been selling well and, as said previously, they had focused on the Orochi Saga storyline.  So to give the series a break for a year between sagas.  It should also be noted that this was the second King of Fighters title released in the US (first was 95 on the PSX).  And if you love fluff, the King of Fighters saga has more (fairly good) backstories than most JRPGs.

It was rereleased in the arcade, PS2 and 360 much later as KoF98 Ultimate Match.  Ultimate is the best version of the title in that they fixed some of the loading issues that the Dreamcast version had (which were by no means bad), added the option for both 2D and 3D backgrounds, the missing characters from the original, new versions of popular characters, and two new gameplay modes (Ultimate and Challenge).  It is the ultimate version of the game.

The King of Fighters series is long running but is currently in flux due to SNK’s “redeath.”

Oh but it is so much more.  The King of Fighter games are renowned for their deep control scheme.  Here are some how to play tutorials that explain it far better than I ever could.

Being that this is a NEO Geo game, the MVS or AES versions are typically considered the best.  However we consider Ultimate Match the best.  Honestly, any version you play, you are in for a good time.  Despite being terrible at the games, I pop in KoF98 every once and a while and play it. It is simply one of the best games ever created.  Here are some good non-Neo Geo home ports to look into:

Instead of posting in the comments section of the blog, we will be using the forum for all of our discussion in order to keep things more organized. So play some KoF98 and talk to us about your thoughts and play experiences in the forums. We want to know your favorite parts, your successes and your failures.
Discuss The Game In The Forum

I’m so excited to play this with you guys this month. I’ll try to give each version I have a play through.

It should be noted that KOF ’99 – Dream Match (the Dreamcast port of ’98) is NOWHERE near arcade authentic. The sprites are sized incorrectly and the screen is adjusted. Combos don’t work, the game plays differently, etc. etc.

If you want to play it on the dreamcast, the best bet would be to acquire the Neo Geo CD version of ’98, and a NEO4ALL emulator boot disc for the Dreamcast.

Can anyone else confirm the above? The sprite sizes wouldn’t bother me, but the gameplay/controls matter.

I just purchased KOF: orochi saga for the wii and it comes with 94 thru 98.
Being more of a capcom fighting game fan as I grew up in the 90s, I missed out
on some snk stuff.
I’m glad they released this complete pack and it can be found for cheap too.
It supports classic controller pro and gamecube controllers.