Zork is one of the first examples of a brand new genre known as a text adventure. Inspired by the original text adventure game, Colossal Cave Adventure, the first version of Zork was created in 1977 by 4 members of MIT’s Dynamic Modeling Group: Tim Anderson, Marc Blank, Bruce Daniels, and Dave Lebling. It was written in the MDL programming language for the DEC PDP-10 mainframe computer. The name came from a slang word used at MIT for an unfinished program. In 1979, the programming staff and other personnel at MIT would form Infocom and re-release Zork as Zork: The Great Underground Empire (later known as Zork I) from the mainframe to home computers in 1980. This version, as well as the other 2 later games in the Zork trilogy, would be written in ZIL, or Zork Implementation Language. Zork set itself apart as a game rich in story and sophistication despite having no on-screen graphics. The text parser was not limited to just nouns and verbs, but also accepted commands written in simple sentences with prepositions and conjunctions. 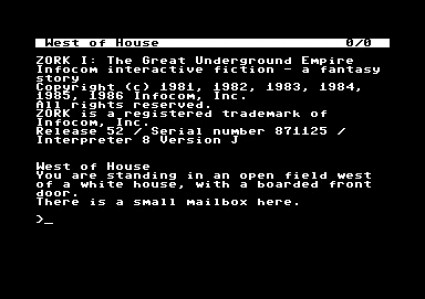 The game takes place in the fictional Zork calendar year 948 GUE. Your character, otherwise known as the “adventurer”, is charged to collect the Twenty Treasures of Zork and to bring them back to a trophy case. Finding these treasures will require solving puzzles and navigating mazes. The player will encounter creatures such as trolls, grues, and thieves. Finding all 20 treasures would score 350 points and make an ancient map appear which leads into the next game of the series, Zork II.

Versions exist on nearly every popular computer platform. Ports of Zork I are found on the Amiga, Amstrad CPC, Apple II, Atari’s 8-bit computers, Atari ST, Commodore’s Plus/4, 64 and 128, Tandy TRS-80, and DOS. A version was also written for computers running the CP/M language.

Zork II was released in 1981 and picks up where the original Zork left off. Zork III was released in 1982. A new set of 3 games known as the Enchanter trilogy would start off in 1983 with Enchanter (originally known as Zork IV), followed by Sorcerer in 1984 and Spellbreaker in 1985. Activision would acquire Infocom in 1986, and shortly after that, the next game in the series was Beyond Zork in 1987. It was widely considered to be the final official Zork game. It had a crude auto-mapping feature as well as some RPG elements.

A prequel by the name of Zork Zero was released in 1988 and featured in-game graphics for the very first time. The first three Zork games as well as Beyond Zork and Zork Zero were put together in the compilation The Zork Anthology. After these games, Activision would dissolve Infocom in 1989 and keep the Zork name as a brand for other Zork adventure-style games in the 90s that would have little of anything to do with the original text adventure series.
Years later, Activision thought to see fit its inclusion in Call of Duty: Black Ops. By pressing L2 and R2 on the game menu and finding a computer terminal, typing ZORK will allow you to play Zork I.

Please join us over at the official thread on the forums if you haven’t likely been eaten by a grue.