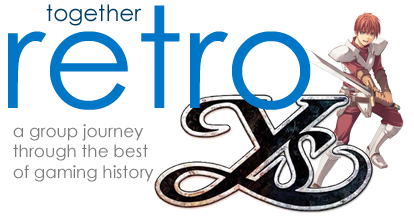 Let’s get this out of the way:  take the word “East” and and drop the T at the end. That’s how you pronounce Ys. Now that we’re all on the same page, let’s explore the 1987 first installment of Falcom’s action RPG series and find out why it has such a huge cult following.

The store of Ys I follows Adol, a seventeen year old swordsman who wakes up in a strange bed, in a strange land called Esterea. His quest begins when a fortune teller explains that this land is being encompassed by an overwhelming evil. And guess who might just be their only hope!

Though Ys presents itself as a typical RPG, it has a couple of extremely unique bits to it. The biggest thing that you’ll need to get used to is combat. Battles are not turned based. And there’s no swinging swords. Instead you literally ram into enemies. Running into them off-center or from the side or back will increase your chances of getting a hit rather than taking damage. It’s a very different way of handling combat, and takes a bit of getting used to at first, but the real advantage is that battles (and even roaming the world map in general) is always brisk. Grinding is never sluggish. On top of that, standing still in a village or on the world map will actually cause you to slowly regenerate HP. This is another conventiont that most typical RPG fans will find extremely alien.

The first three Ys games were released in the US — in fact the first two games are almost always bundled together as a single suite. However after that the series retreated to Japan where it enjoyed a long and cultish life. Luckily entries have somewhat recently started finding their way back to the West thanks to XSeed’s wonderfully PSP releases. These include a compilation of the first two games, a remake of the fourth game as well as the seventh numbered entry in the series proper.

In a sense you may also pick up on other unrelated titles that might feel a bit of Ys’ legacy. For instance the innovating Half-Minute Hero (PSP/XBLA) relied on the “ramming into enemies” combat system in a very deliberate attempt to speed up gameplay.

Ys I has been ported to and remade on many systems, though we’ll focus on the ones that have been translated to English.

The Turbo CD version seems to be a favorite of retro enthusiasts. This same version is now easy to get hold of thanks to the Wii’s Virtual Console.

The Master System version is altered a bit with downgraded audio, altered visuals, and some maps in the game are rotated for some anomalous reason. It does not affect the game play but it is different from the original and the TG-16 version.

Also, Ys for the Nintendo Entertainment System was drastically changed.

The recently released and easily attainable PSP version is definitely great for historians as it allows you to choose between the visuals of a 2001 Japanese PC remake or a brand new 2009 PSP exclusive version. Likewise, it gives you the option of choosing between three soundtracks — the 2001 and 2009 versions, as well as the original 1987 chiptune audio.

To keep things organized, instead of posting in the comments section of the blog, we will be using the forum for all of our discussion. So load up some Ys and let us know what you think of the game and the progress you are making.

Ah yes. This is probably the most relaxing RPG to play. I might fire up Ys: Vanished Omens in my PBC and then work through the final dungeon in my PSP copy as well. The first two entries in this series have aged like wine, they just get better with age.

It’s always nice to see some love for the Ys series. 🙂

Here’s a couple of corrections:

* The words “story” and “Esteria” are misspelled in the Story section.
* XSEED released a remake of the third game – not the fourth.