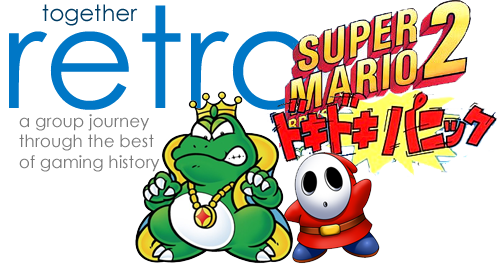 The Together Retro crew spends a lot of time plucking away at the overlooked and forgotten classics. At first glance, Mario Bros. 2 might seem like an odd choice for the gang but as a quirky piece of gaming history that has never really been duplicated, it’s actually a great fit. This month, the Together Retro bunch is playing Super Mario Bros 2 and / or Doki Doki Panic 2, the game that the great NES classic was based on. So join us in throwing radishes and shy guys at one another.

Okay. You know the Super Mario Bros. 2 story. This is not the late 90’s and you have access to that whole Internet thing. Nintendo thought that the actual sequel to Super Mario Bros. (Known as Lost Levels outside of Japan) was too hard for the rest of us so we got a wacky game that was nothing like Super Mario Bros, instead. Here’s the thing: Nintendo was kinda right. The true Super Mario Bros 2. is a hell of an experience but only a few people (aka, the diehard) would call it fun. The Lost Levels feel more like a masochistic fan-mod than a real expansion of the series.

So where does that leave us? Oh yes, the Super Mario Bros. 2 that the West received. The goal of the game is to run, jump, climb, and throw enemies and/or vegetables at enemies. If you remember what gaming was like in the late 80’s / early 90’s, you’ll remember that there were no ‘franchises’ at that point. Nothing was set in stone. All the same, Super Mario Bros. 2 was a radical departure from what we had become used to. Not since Zelda 2 had a beloved sequel turned out to be so different.

Super Mario Bros. 2 was actually a re-skin of Doki Doki Panic 2, a Famicom Disk System game about a family of four drawn into an Arabian Nights style storybook. When Nintendo of America passed on the as-is version of Mario Bros 2, this game became the logical substitute. Sure, the sprites of Mario, Luigi, Toad, and Princess Toadstool had to be drawn over the existing characters but with a sound track by Koji Tendo (the original Super Mario Bros composer) and a set of very Mario-like element such as the starman, coins, and a similar jumping noise, Doki Doki Panic was a natural choice.

It’s not complicated: Mario and his crew have fallen asleep and are now trapped in a dreamland. The only way to wake up and free the people of Sub-Con (the silly name of the world that Mario 2 takes place in) is to find and fight Wart, a kind of evil frog who stands in for King Koopa and resists the urge to kidnap Princess Toad Stool.

Minus the Mario elements, the story of the original Doki Doki Panic is much the same. A family of four falls into an Arabian Nights like book and must run from left to right in order to fight Mamu, a kind of evil frog (deja vu) in order to leave.

Oscar Wilde like word play this is not but for the 8-bit era, this was a really good excuse for jumping atop enemies and throwing vegetables.

8-bit goodness. The D-pad runs your character back and forth while the a button gets your character jumping and / or floating. The B button is your wild card. It speeds you up, picks up stuff, and throws items. Hold down for a second and watch your character begin to flash. Your next jump will be a super jump!

The crazy thing is that the Western version of Mario Bros 2 (which is not at all a true Mario game) has left a much stronger impression on gaming than the true sequel that our Japanese buddies received. Even in modern Mario releases, very few of the gimmicks that the actual Mario Bros 2 introduced have made the cut. On the other hand, Sniffits, Bob-ombs, Luigi being taller, Princess Toadstool floating, and being able to toss enemies at one another have become staples of the franchise and many of its spin-offs.

This is another of those Together Retro choices where the gamer is spoiled for choice. If Super Mario Bros 2 is the game you’d love to play, you can choose the NES original, the SNES and Wii enhanced versions or the Virtual Console re-release of the original.

Alternatively, you can also play a modified version of Mario Bros. 2 on the Gameboy Advance in the form of “Super Mario Advance”. This was a launch title for the Gameboy Advance that took numerous liberties with the source material. Levels and enemies are slightly modified, voice acting is added and…well, it’s not quite the same but a play through of Mario Bros Advance can be a fun change of pace for any fans of the game that wants a change of pace.

For the purists out there who want to play the actual Doki Doki Panic, your options are a little less diverse. Racketboy folk with their own Famicom Disc Systems have the option of using that, assuming their system still works and their copy of the game is still solid. Otherwise, those who are okay with emulation should not have too many problems setting themselves up.

If you would like to see some screenshot comparisons of the games and ports, check out this older Racketboy post that shows the differences.

To keep things organized, we’re going to discuss Doki Doki Panic and Mario 2 on the Racketboy message board’s dedicated Together Retro Forum. This is where you can complain about this game not being enough like Super Mario Bros or explain to the non-believers why throwing radishes is the best thing you can do with a game pad.

Koji Tendo, eh? You sure you don’t mean Koji Kondo?

No dice on the screenshot comparisons page; apparently the Flickr album closed.