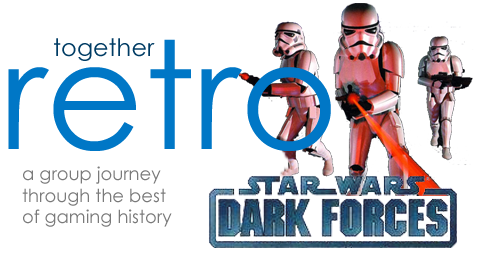 A long time ago in an office that continues to pump out Star Wars games.  A team of programmers cranked out a so called Doom clone that married the vast Star Wars universe with the world of first person shooters, and Dark Forces was born.  Dark Forces puts you in control of Kyle Kataran, a neutral mercenary who use to be a decorate Imperial officer who eventually joins the alliance, gets a lightsaber, and kills a lot of stormtroopers.

Dark Forces was created on the Jedi engine, a new FPS engine that allowed the character to freely look up and down and crouch/climb.  It was only used for one other game, Lucasarts amazing Outlaws, as it was replaced by the Sith engine for Jedi Knight.  Dark Forces was created to be a first person adventure game with combat elements.  It was erroneously called a Doom clone when first released, even though it was a completely different style of firstperson shooter.  The Jedi engine allowed for multiple floor maps, speech, a living environment, and ofcourse the John Williams soundtrack.  It was ported to the Mac and had some technical hurdles, but if you have played it, it plays just aswell as the PC version – a testament to Lucasarts programming prowess of the mid 90s.

Dark Forces is a lesser known FPS and is often overlooked because of the amount of Star Wars games.  It also aged poorly – In these days of high polygon models, the sprites and muddy polys are an eye sore.  However, Dark Forces influenced a lot of FPS games.  It spearheaded new technologies, introduced heavy puzzles (not just “get the yellow key”), and above all else actually brought the player into the world.

Being an early FPS, Dark Forces controls are wonky.  You can remap most of them to resemble a modern control scheme but it will take a lot of work.  So go to the Together Retro forums and share you favorite mapping.

Dark Forces was only ported to one console, the Playstation (and is on Playstation Network).  The port suffered from a lower frame rate and lesser graphics.  It is by no means bad, it is just not as good as the PC/Mac version.  For those playing on the PC, it is highly recommended to just buy the game on Steam and install a 3rd party modification such as DarkXL.  DarkXL fixes some of the bugs, ups the graphics, and fixes the most of the issues with mouse look in the control scheme.

Instead of posting in the comments section of the blog, we will be using the forum for all of our discussion in order to keep things more organized. So play Dark Forces and talk to us about your thoughts and play experiences in the forums. We want to know your favorite parts, your successes and your failures.
Discuss The Game In The Forum

I remember buying this game when I was 14; it is still incredible as of today,
the music of course but the graphics and the video were so impressive !

At that time we needed to plug the CD drive on either the Sound Blaster or a dedicated ISA card,
I had the the best stuff that was out this time : a Panasonic 4x 🙂

Another excellent Lucas game I had a few years later : Shadow of the Empire; with a 3DFX.

my grandmother bought me this back in the day. had some good times with this title