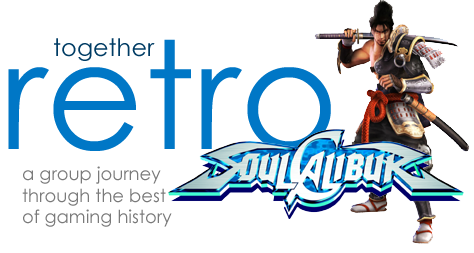 Presented by Flake
New To Together Retro? Check out the introduction to the club

Soul Calibur V is upon us and thus it is time to return to the stage-of-history-of-the-soul-that-burns-within-the-battle-of-the-heart or whatever excuse you need to pick up an awesome looking sword and start waving it at elaborately dressed warriors. Here at Together Retro, we figure the best way to welcome a new game of a classic series is to spend a month ignoring it in favor of an old game in said classic series. This month we will be playing Soul Calibur.

As a fighter, the ‘concept’ behind Soul Calibur is extremely easy to understand. The fighter is, afterall, one of the oldest genres around: Two people use fists, weapons, or fireballs to annihilate each other and the action is framed with a confusing and ultimately superfluous story line. Soul Calibur differs from other fighters in that spirit of the game is not in the mechanics of the game but rather in its presentation. Most fighters such as Street Fighter or Guilty Gear are the exercises in hit-box spotting and combo-memorization where accuracy is demanded and meticulousness is rewarded. Soul Calibur is a flashy game featuring flashy environments and bigger than life characters, and the gameplay matches this. Upper level game play will require mastery of the mechanics, but even button mashers can wander into a session of Soul Calibur and have a grand time. Soul Calibur is a fighting game about kicking butt and looking amazing doing it, no matter what your skill level.

As with any arcade fighting game, the specific buttons are what you choose to make them. The direction input will move your character towards and away from your opponent as well as into and out of the environment, allowing you to outflank your enemy or even completely circle behind them. There are three attack buttons (Horizontal attack, vertical attack, and kick) and a guard button. Special moves and grabs will require short sequences of direction inputs and the attack/guard buttons.

Soul Calibur is the sequel to a less well known but still fun arcade fighter called ‘Soul Edge’. Soul Calibur took the things that Soul Edge did well and pumped them up a few notches, securing brand name status for the series at a time when it was not easy for a new fighting game to garner notice in a market saturated by fighting games.

Perhaps more astonishing was what happened when Soul Calibur was ported to the Sega Dreamcast. A great arcade title became better at home. Soul Calibur was one of the first instances where the technology was available and the effort was made to improve the arcade title as it made the transition. Not only was nothing lost, content and features were added. This set the bar high for future Soul Calibur releases both in the arcade and at home, a distinction that would come back to haunt the series as the years went by.

Since the original Soul Calibur, the series has also become known for its inclusion of cameo characters such as Link from Nintendo’s Legend of Zelda series or Darth Vader from Star Wars. These cameos have always been met with mixed reception; The cameos make each Soul Calibur stand out but fans are often frustrated by the balance issues these characters introduce or the incongruity of the characters appearance alongside the cast of Soul Calibur.

Unless you have a Soul Calibur arcade cab in your house or you are emulating, odds are most TR participants this month will be playing the Sega Dreamcast version of the game which, in addition to the standard Arcade mode, included a mission mode with unlockables such as new costumes, artwork, and extra characters. The mission mode is a fairly straight forward affair that adds a new dimension to the single player experience. Other ports of the game have generally omitted the mission mode and instead features survival modes or online leader boards.

Soul Calibur has been ported to the Dreamcast and is considered an outstanding version of the game, especially if you are fortunate enough to have a VGA connection. It has also been ported to the Xbox 360 but this version of the game lacks the mission mode and does not support online gameplay. Recently, iOS devices also received a port which could be fun if touch screen controls are your thing. If you find yourself interested in playing a more recent entry, the sequels have been released for the Playstation 2 and 3, both Xbox’s, and the Nintendo Gamecube.

To keep things organized, instead of posting in the comments section of the blog, we will be using the forum for all of our discussion. So go out and do your best to destroy the evil sword while your soul is burning. We want to know how successful you are in saving (or threatening) the world of Soul Calibur. We also want to know how many times you take a cheap shot to the chin and get kicked out of the ring with a nearly full life bar.

Just wanted to note this line in your article:
“Soul Calibur was one of the first instances where the technology was available and the effort was made to improve the arcade title as it made the transition.”

This was in fact done previously with Soul Edge/Blade on the Playstation. The Playstation version featured more characters, more music, more costumes, more weapons, refined controls, more content, more everything. Soul Calibur’s home enhancement was just following the path already cut by the console version of Soul Edge. The only real difference was the knock out graphics brought to us by the then next generation Dreamcast.

Many, many arcade games before Soul Calibur were given a few extra features, characters, or levels when ported to home console. This is evident as far back as the Atari. The point I was making was that Soul Calibur was one of the first home releases of an arcade game that improved on everything, rendering the actual arcade cab itself nearly obsolete. Soul Edge for the Playstation, while a great conversion, was still limited by the down grade in hardware.

Dead on Flake – and nice write up for this month!

I will always have fond memories of the original DC game. We played Soul Edge (had a PSX import) a lot and that continued onto Soul Calibur.

I like the speed run aspect to defeating the arcade mode as even I picked this up and beat it over the summer pretty handidly (not a big deal of course).