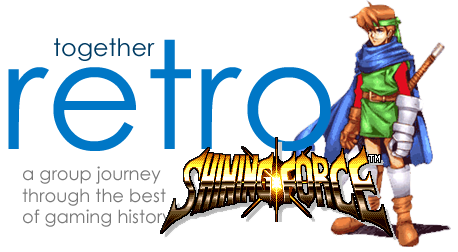 This month’s Together Retro title is a turn-based Strategy RPG, and part of the Shining series.

Shining Force’s Legacy and What Made It Special

The Shining series started as first-party Sega games with RPG elements (so Sega’s major RPG-based IP in addition to Phantasy Star). The games span several genres, the series debuted with that debuted the series in Shining in the Darkness, a traditional “first-person” view RPGs (like Wizardry), SRPGs such as this Together Retro title, and some action oriented games with RPG elements. There is also a Japanese anime based on the stories of two of the action RPG games that came out on the Playstation 2.
The series is still very much active with the DS and PSP having received Shining games on 2009 and 2010 respectively, which is notable considering the series turned 20 years old this year (Shining in the Darkness was released in 1991)!

Shining Force: The Legacy of Great Intention (shortened to Shining Force during the article) is the second in the Shining series and the first SRPG. The series includes in total eight SRPGs, all of them having “Shining Force” in the name in case you want to distinguish from the other types of Shining games. Shining Force started off what is arguably the main branch of the Shining series (at least in number) – together with the original Shining in the Darkness there is another first-person view RPG, and across the action-oriented titles there are nine in total games but that is a more loose grouping of various types of action-RPGs. Notable titles include: Shining Force CD for the Sega CD / Mega CD, which is itself half a remake of two previous Game Gear entries in the series and half exclusively new content; Shining Force III is a Sega Saturn exclusive which was separately available as 3 “Scenarios” (well before Blizzard with Starcraft 2) – sadly only the first Scenario was localised in English with the other two remaining not only Saturn but also Japanese exclusives (not the best example of accessibility); and Shining Force Feather for the DS (2009), the most recent Shining Force title is also a Japanese exclusive.

In terms of the gameplay of Shining Force, rather than thinking Tactics Ogre / Final Fantasy Tactics (or the Laser Squad-inspired parts of X-Com UFO:Enemy Unknown) the closest comparison is probably to games of the Fire Emblem series. During battles you control your units from a top-view, and combat between two units is represented with a 2D animation of the attack(s).
The battle and combat engine have significant differences from that of Fire Emblem, most notably that there are not alternating faction turns – in Shining Force all units move on the same turn and the order in which they do so depends on their stats.

Other differences include weapons not getting used up and spells requiring MP instead of uses from spellbooks, and during combat counter-attacks are not automatic from surviving enemy units (they do occur, but less retaliation from surviving enemies somewhat diminishes the importance of ranged units etc.). All in all, it is still turn-based combat with your units leveling up, but wiht many different mechanics which matters a lot in this kind of game.

Another big difference is that between battles you get to explore like in traditional RPGs – so you get to talk to the other people, go to shops to trade for better weapons or other supplies such as healing herbs, or even recruit additional members to the Force.

Unlike more popular genres such as platformers during the 16-bit era, SRPGs are not exactly abundant (particularly if you narrow it down to titles localised to English). It is very much worth playing this classic from Sega and experiencing its mechanics – particularly so if you like Nintendo’s Fire Emblem series or have enjoyed other SRPGs or turn-based games (also feel free to suggest other quality SRPGs in the discussion thread).

The main plot itself seems to be relatively unoriginal, although that does not mean you won’t necessarily enjoy it. Max is a young boy with amnesia that was found and taken care of by people in a “good kingdom” (the kingdom of Guardiana). Max gets trained in sword fighting by one of the King’s top knights, Lord Varios – and Max is revealing himself to be a great swordsman. Eventually Another kingdom ( the kingdom of Runefaust) turns “bad” and is spreading violence, apparently intent on resurrecting an old Evil entity that had been defeated and imprisoned many years ago. The apparently aptly named Kingdom of Guardiana happens to be responsible for guarding some important place, which is implied to be related with the imprisonment of the Evil entity. When the good King learns that Runefaust hordes are near Guardiana, Max is asked and check if all is well on the important place. He accepts and is assigned with a small force (which gets dubbed the “Shining Force” by the game whenever anyone joins it). Sadly, while Max is away and involved in defeating a few Runefaust units, Guardiana gets invaded by the hordes of Runefaust. The Shining Force fights their way back to Guardiana where most of Guardiana’s Knights have already been defeated. Max then arrives to the throne room just in time to see a main antagonist finish his business and teleport out. The plot continues from there as Max gets tasked by the King with finding something before the Runefaust does…

It is important to note that you can learn about the backstories of other members by talking to them in your Headquarters between battles. They progressively tell you more of it as the game develops, which is an interesting (optional) way to learn more about your comrades.

The controls are mostly self-explanatory and the menu system is mostly intuitive and not difficult to navigate. During battles and when moving your characters don’t be alarmed as unlike other SPRGs they actually move out as soon as you use the d-pad, but you are not really losing movement. If you have specific questions please join us in the forum.

The GBA remake is renamed as Shining Force: Resurrection of the Dark Dragon. It has some balance tweaks and some redrawn graphics, extra characters, battles and plot exposition, but it reportedly does not deviate significantly from the original. With the extras it seems to me that the GBA remake is the optimal version to play, but that the other options are almost as good and therefore there are no wrong choices here – play the remake if you want to game on an handheld or care for the extras, or otherwise go for the original (available on modern systems e.g. on the Sonic’s Ultimate Genesis Collection).

Join us in the forums to read on the progress of others and discuss your experience with the game. There’s plenty of strategy to discuss, tips for particular missions, opinions on the many members of the Force.

I would like to politely suggest you consider revising this sentence:

“The games span several genres, the series debuted with that debuted the series in Shining in the Darkness, a traditional “first-person” view RPGs (like Wizardry), SRPGs such as this Together Retro title, and some action oriented games with RPG elements. ”

I don’t really understand what this sentence means. Perhaps this would make more sense if you re-wrote it as two or more separate sentences.

I was able to interpret the sentence but I’ll have to admit that the writing was far below the standard of other posts. A shame since shining force is one of my favorite games!

Not a good start for me then 🙂 I messed up that sentence obviously, I changed that part and should have re-proofed it.

“The games span several genres. The series debuted with Shining in the Darkness, a traditional “first-person” view RPG, but there are also the Shining Force games that are SRPGs and also some action oriented games with RPG elements.”

As for the rest of the article, I can only say that I’m probably not as good writing as the other contributors 🙂

Hope you enjoy the game regardless!
Ivo.

Just finished it not too long ago, guess I’m playing it again!

The GBA version has a better translation, although I found the new cutesy graphics to be a bit much. The look of the MD version is a bit darker and serious by comparison.

Glad I caught this before the end of the month. I’ll get started this long weekend.
I’ll take a look around for a GBA port, but have the Sonic Genesis collection for the 360, so may just start it there.

I started playing Shining Force a few months ago, I have the sega classics collection on my 360.
Instantly reminded me of Advance Wars(which I loved). Very good game, the enemies on the map and some of the boss battles are impressive for a 16bit game. One of my favorite Genesis games.