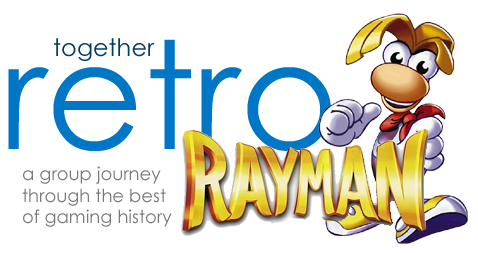 Imagine for a minute it is 1995.  Thats right: Arnold is a robot and not a politician, some sort of super cd is announced called DVD, OJ is found not guilty, and the console wars are very strong.  There are consoles from every major company in a heated dogfight: Sony Playstation, Sega Saturn, Super Nintendo, and Atari Jaguar all vying for your dollar.  While Nintendo is pushing a multitiude of good SNES games (Earthbound, Chrono Trigger, Mario World 2, etc) and promoting the N64 heavily, the other three are all pushing for a different type of platformer hero.  A odd character with a purple body and huge eyes.  This character is none other than Rayman and its time to give a good platformer some more love.

Created by Michel Ancel (also known for creating Beyond Good and Evil) in 1994 in his spare time.  He was a graphic desiginer with Ubisoft and took his passion for Celtic, Chinese, and Russian fairytales, through them into a blender and Rayman is what came out.  Ubisoft decided to take a chance on the character and in 1995 released Rayman for the Jaguar to mild applause.  It was not until it was released for the PC, Playstation, and Saturn, until Rayman got a fair amount of accolades.  Rayman was the first Jaguar game to utilize the full color palette and even the reviews from 1995 highly suggested buying an Svideo cable so you can see the difference.

While Rayman has not been platforming recently, he is getting back into the game this Holiday season.  But in an odd bit of gaming history, when Rayman 4 introduced a new enemy type called Rabbids (Rabid Rabbits), that were to be the primary antagonists of the game.  Well the game was revealed as Rayman Raving Rabbids and when released it was not a platforming adventrue, but a very good series of mini games.  Seven titles later, the Rabbids may have taken the spotlight from our purple hero, but not for long.

Why We Chose Rayman

It is one of the best 2 platformers from its time and can easily be found a various consoles and handhelds.  Its spinoffs are a variety of party games and 3d platformers, but the original is a fantastic 2d platformer that has never gotten enough credit with the general populace.  I had never really played it until now and it is the only game to be in my Jaguar more than Tempest 2000.

Instead of posting in the comments section of the blog, we will be using the forum for all of our discussion in order to keep things more organized. So play Rayman and talk to us about your thoughts and play experiences in the forums. We want to know your favorite parts, your successes and your failures.
Discuss The Game In The Forum

I love rayman…playing it right now on my psp =))

I have Rayman for the PC that I bought long time ago, and I am currently enjoying it on the DSiware.

I am playing Rayman: Origins on my PS Vita!! looks AMAZING