This month for Together Retro, we feature an arcade shoot-em-up from 1990, Raiden by Seibu Kaihatsu. From the Japanese words for “Thunder” and “Lightning”, it’s up to the supersonic fighter ship Raiden to stop the threat of the alien Cranassians. 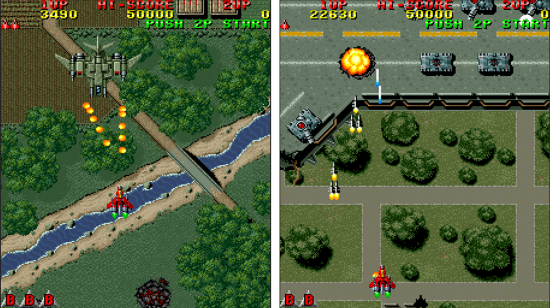 Raiden features 8 stages which has the player fight air and ground targets. The Raiden ship has 2 ways to power up. There are two main weapons, the standard red shot that starts out with a small range of bullets, but when powered up spreads out wide to cover the entire screen, and the blue laser which doesn’t have the reach of the red weapon but is more powerful and its fire is concentrated in a straightforward direction. There are also two types of missiles: the mega (M) missiles that fire straight ahead and do additional damage upon impact, and the homing (H) missiles, that go after enemies. The Raiden fighter also has 3 bombs per life that do a massive amount of damage. Medals can also be found in places throughout the stage that add to the player’s end-of-stage bonus, as well as two other items/characters that would appear in future Raiden installments, the blue dragon-like Miclus and the Fairy.

Raiden also had a special feature that many other shmups would use in the years to come; when you lose a life, your ship breaks into many fragments that damage any enemies it comes in contact with!

Raiden was widely ported at the time. Some of these home ports go by the names Raiden Trad or Raiden Densetsu.

Computer ports include PC (DOS) as well as unreleased versions on the Commodore Amiga and the Atari ST-Falcon.

Raiden is also available on Windows and mobile devices with the Raiden Legacy collection from DotEmu.

After the success of Raiden, Raiden II was released to arcades in 1993. An update to Raiden II, Raiden DX, was released in 1994. By the time Raiden III was released in 2005 on Taito’s Type X arcade hardware, Seibu Kaihatsu no longer existed as a company. The development staff from Seibu became MOSS Co, Ltd. and they acquired the rights to the Raiden franchise. MOSS also made Raiden IV in 2007, and Raiden V is in the works as an Xbox One exclusive which is to be released soon.

Raiden also had two spinoffs. The first, Viper Phase 1, featured the Judge Spear and Blue Javelin fighter ships. It was released to arcades in 1995.

If you’re up to joining us in our fight against the Cranassians, please join us on the forums.