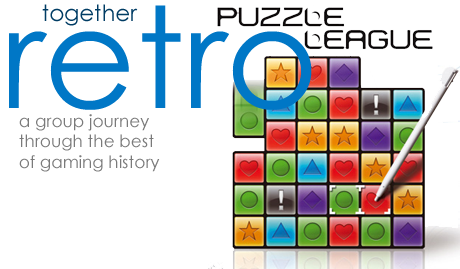 When you think of classic puzzle games, it’s easy to remember notable games like Tetris, Puyo Puyo, and maybe a few others. But for this months Together Retro, let’s take a look at one you may not be familiar with – Panel de Pon.

Panel de Pon, also known as Panel de Pon: Action Puzzle Game, was developed by Nintendo’s internal development team Intelligent Systems and was published by Nintendo in October 1995 in Japan for the Super Famicom. It is the first game in the long running Puzzle League series, including one many people might know, Pokemon Puzzle League for the Nintendo 64, which also features similar mechanics and gameplay.

In Panel de Pon, the evil king Thanatos has cast a spell over the land of Popples to cause fighting and strife among the fairies. The Flower fairy known as Lip was not affected due to a magical stick in her possession. Now Lip is sent off on an adventure to defeat each one of her fairy friends in a special puzzle game to return them all to normal, upon doing that, she will face off against Thanatos.

For those not familiar with this game or Pokemon Puzzle League, the player is given a playfield which represents a basic grid of squares in a long deep pit similar to Tetris. Blocks are stacked one on top of another and will start to rise slowly towards the top of the screen. New rows of blocks will periodically be added to the bottom of the pit. The player’s job is to arrange all these blocks by swapping 2 at a time in patterns of 3 (or more) either vertically or horizontally. As these patterns are cleared, any blocks above the eliminated sets will drop down to fill in the gaps. The game is over when the blocks reach the top of the screen. Blocks can also be swapped with an empty space, and those blocks will fall to the lowest part of that particular column. Clearing more than 3 blocks in a single pattern scores a Combo and Chains are available by clearing more than 1 pattern in a single move. In the multiplayer mode, this would also send a series of “garbage” blocks to the other player.

This game can be played through in the Story Mode, with Lip playing against the other fairies, or in Endless Mode where it is just you against the blocks playing for as long as you possibly can. There is also a Timed Mode, where you play as fast as you can within 2 minutes, Stage Clear mode where you must clear blocks below a set line in the pit, and finally, a Puzzle Mode where the objective is to clear out all the blocks in pre-set patterns with a set number of moves available.

Outside of Japan, this game is known as Tetris Attack, released in late 1996 near the end of the Super NES life cycle. The game modes and gameplay are exactly the same, but characters from the popular Super Mario World 2: Yoshi’s Island are used throughout the game, with a story revolving around Yoshi defeating all his friends who were cursed by Bowser, eventually culminating in the final battle against him. The music from Yoshi’s Island is also in this port, arranged by Fire Emblem composer Yuka Tsujiyoko. The demo theme is “Lip’s Theme”, which would appear later as a remix on Super Smash Bros. Brawl on the Nintendo Wii. This altered version of Panel de Pon would also be released in Japan using the Satellaview satellite modem service. Despite Tetris Attack’s name having absolutely nothing to do with Tetris, a 2009 E3 article with Alexey Pajitnov (Tetris creator) and Henk Rogers (Bullet Proof Software’s licensee to Tetris) quotes them as saying that in retrospect “they really should not have given Nintendo the rights to the Tetris name for this game.” But without the Tetris name, would this game have done as well, let alone even be recognized?

Panel de Pon was re-released in 2003 with Dr. Mario and Yoshi No Cookie (Yoshi’s Cookie) for a Japan-only Gamecube title known as Nintendo Puzzle Collection. Releases in North America and Europe were planned but eventually cancelled.

Panel de Pon references occur in Super Smash Bros. Melee and Super Smash Bros Brawl. In both games, there is an item known as Lip’s Stick which poisons a character on contact and a flower appears over their head. An in-game trophy explains its Japanese origin. Also in those games, one of Kirby’s Stone objects is a garbage block from Panel de Pon.

We will be using the forum for discussion on this game. Come and visit us over on this month’s Together Retro thread to let us know how you are enjoying the game and how well you are doing.

I remember the Pokemon Puzzle league. I didn’t know it came from another game with a story, I thought it was just a version of Tetris. I think I played the Puzzle League Pokemon game more than I played any of the other Pokemon gamers. Something about puzzles that keeps you hooked. Great article by the way!

Tetris Attack = favorite puzzle game of all time. It’s so satisfying when you get extremely lucky and end up dropping a garbage block that fills the opponent’s entire screen. XD

Absolutely love this game. Me and a friend still play this constantly; while everyone else was busy playing CoD or Halo, you’d here the dreaded “Trumpet of Doom” play when one of us played a huge chain.

I’m not that much of a online reader to be honest but your site is great, thanks!