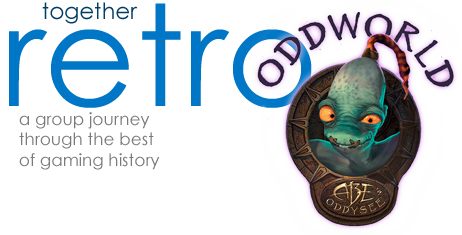 This month in Together Retro we explore the first entry in OddWorld Inhabitant’s OddWorld series. Many of us have worked awful jobs in our lifetime, but poor old Abe’s takes the cake – not only is he a slave, but his ‘employer’ RaptureFarms plans to turn Abe and all of his fellow Mudokan’s into Tasty Treats and sell them to the world at large. As a humble janitor, Abe is going to have to really step it up to save the day and his species from a deadly but delicious fate.

Released for the Playstation 1 in 1997, OddWorld: Abe’s Odyssee is a sinister but humorous, puzzle platformer which draws from the cinematic platformer classics of old. A best seller for the system, Abe’s Odyssee was highly regarded at the time of it’s release.

Abe’s Odyssee is a 2D cinematic platformer with heavy puzzle elements. As Abe, you must explore the world and find your fellow Mudokan Slaves and free them, all whilst avoiding enemies and deadly factory obstacles. Careful though – your colleagues can die just like you can, so saving all 99 is a real challenge. Your goal is to safely leads as many of your friends to evacuation portals as you can.

As well as some basic platforming skills, Abe has some other unique capabilities to help him save the day. The first of which is his ability to communicate. By using a combination of the shoulder buttons and the face buttons, Abe can give various commands to NPCs such saying hi, telling them to wait or asking them to follow him. He can also fart, because it’s the 90s.

In addition Abe can use a special chant which allows him to open portals and take control of enemies. This lets you scout ahead, sneak past guards and shoot to solve puzzles in a different way.

There are plenty more context sensitive commands Abe can use, so there’s lots of variety in puzzle solutions.

Abe’s Odyssey was originally released for Playstation and PC in 1997, with both a DOS and Windows version available for computers. A Game Boy adaptation later appeared in 1998, retitled as OddWorld Adventures. The Japanese version of the game was retitled as Abe A GoGo and received some minor visual changes.

The game has since received digital releases on PSN (playable on PS3, PSP and PS Vita), Steam and Good Old Games.
In 2014, a digital only remake of Abe’s Oddysee was released for modern systems, titled Oddworld: New ‘n’ Tasty! It is available through digital services on the Playstation 4, Xbox One, Playstation Vita and Wii U consoles, as well as through various digital services on PC, Mac & Linux.

There have been several releases in the OddWorld series since the original Playstation title.

Due to the popularity of Abe’s Odyssee, a sequel quickly followed just one year later in 1998, titled OddWorld: Abe’s Exoddus. Versions were available for Playstation 1 and PC on release, and it’s now available through various digital stores. A remake in the vein of New ‘n’ Tasty is in development.

The third title in the series was released as a launch title for the original XBox and was titled OddWorld: Munch’s Oddysee. It moved to a fully 3D world and gameplay and featured a new playable character in addition to Abe. The game received a GBA version in 2003 and the XBox version has since been released in remastered form for Playstation 3, Playstation Vita and PC digital services.

The latest original release in the entry was OddWorld: Stranger’s Wrath, originally released for the original XBox. It features a major departure in gameplay from previous entries, with a sci-fi western aesthetic, a new protagonist and FPS gunplay featuring literal ‘live’ ammo. It has since been remastered and released on PSN, PC, and mobile platforms.

Let us know if Oddworld really is as tasty as they say in the forums!