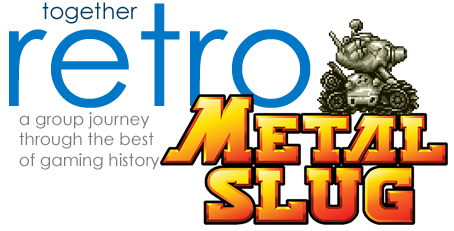 Any gamer with first-hand memories of the early 90’s can tell you about the big red arcade cabinets that populated the local movie theater or skate rink. These boxes weren’t Street Fighter II. They weren’t Donkey Kong. Even though they had 2 or maybe 6 games, you were not going to find Mortal Kombat or X-Men installed. These were Neo Geo cabinets – a kind of arcade system that was similar to home consoles in that they used cartridges instead of requiring completely new hardware. This mean that each Neo Geo cabinet could have a completely different set of games. Some had King of Fighters. Some had Samurai Shodown. With one exception, it was a complete roll of the dice which games were included.

Except for Metal Slug. Almost every big red box of love had Metal Slug.

This month on Racketboy’s Together Retro club is going to work on one of the original gods of 1cc culture. Pull stuff out of your underpants and tell us ‘thank you’ as we run and gun through Metal Slug.

Metal Slug was conceived of with a very simple design philosophy: An action game that is so exciting that players would be willing to continue to spend quarters to keep playing. The first three games were developed by the legendary Nazca corporation exclusively for the Neo Geo hardware. The games were so successful in implementing a kind of sensory overload that captured player’s attention (and money) that SNK actually purchased the group in 1996.

In 2001, SNK was forced to declare bankruptcy after the commercial failures of ventures such as the NeoGeo AES, NeoGeo Pocket, and Hyper NeoGeo 64. This led to the original Metal Slug team being disbanded as SNK was reconfigured into SNK Playmore. From Metal Slug 4 and on, there have been various teams and groups that have produced the series.

Trying to tell the story of any series of arcade games always feels a little silly – this particular series’ narrative does not help. In the early Metal Slug games, you control commandos who are tasked with defeating a very Nazi-esque army nearly single handed.

As the series continued, former enemies turned into kinda-sorta allies as aliens (yes, aliens) invaded the Earth and Zombies became a problem, too. To be fair, Street Fighter has a more coherent story-line but that should never be the point when it comes to a run and gun classic.

90% of the time, Metal Slug is a little like an unforgiving Megaman. You run, gun, and jump. Occasionally you receive weapons like rocket launchers, shotguns, or the venerable heavy machine gun. These weapons always have finite ammunition but give the player a sense of nigh-invulnerability while they have them.

Then there are the blissful moments when you obtain a Slug. In the early games, the ‘Metal Slug’ is a proto-type combat tank that you are able to get into and lay serious hurt on the enemy with little worry for yourself. As the series progressed, the family of ‘Slugs’ came to include planes, helicopters, submarines, and even weaponized camels. When you play Metal Slug you live for these short moments of absolute power and the best players learn to keep their Slugs alive for as long as possible.

One thing that is important to convey about the gameplay is that this series is not known for being fair. It does not care about giving the player a way out. This is 90’s era, take-all-of-their-quarters arcade purity and you can either get good at the game or deal with credit feeding. Either way is fine as long as you have fun, but do not expect Metal Slug to care about your feelings.

Metal Slug is a game perfectly positioned for a month of Together Retro. The original game (which I imagine most of our members will be focusing on) is available on nearly every system known to man. Steam, Playstation Network and the Wii Virtual Console all feature downloadable versions. I do not recommend the Wii Virtual Console version as it is a direct port of the AES release and it does not allow credit feeding making it rough for beginners.

The rest of the series has seen releases here and there but I recommend a single specific path: The Metal Slug Anniversary Collection. This is a disc that contains Metal Slugs 1-6 and X and it is available on the PS2, Xbox, and Nintendo Wii. Even better, the Playstation 4’s store recently saw the release of a digital version of the Metal Slug Anniversary Collection for only $20! If you are keen to use an arcade stick, avoid the Wii collection as it does not support classic controllers.

Metal Slug saw 7 arcade releases of varying quality. The Metal Slug series was also a big part of the Neo Geo Pocket’s line-up with 2 spin-offs that take an almost Megaman approach to the arcade formula. Metal Slug 7 was developed as a big come-back for the series and was released for the Nintendo DS in 2008 with releases on the Playstation Portable and Xbox Live Arcade a year later. It is 2016 and there have not been any further Metal Slug games but it is likely that the series’ current hibernation is more due to SNK’s ongoing financial woes than any problems with the series.

We are all of us like bearded POWs with flame throwers hidden in our underpants, waiting for an amazing warrior to come along and free us. Share how this makes you feel on the thread we’ll have set aside for this legendary arcade series this month