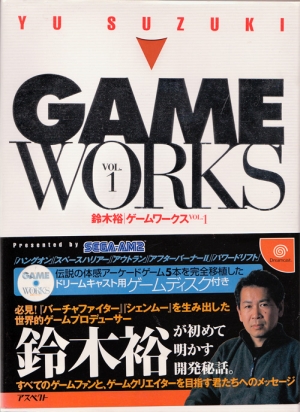 As one of the most revolutionary minds behind Sega’s past blockbusters and innovation, Yu Suzuki can be thanked for a number of great games such as Outrun, Shenume, and the Virtua Fighter series. As a tribute for the master and look back for his fans, Yu Suzuki’s Gameworks Volume 1, was a book and Dreamcast GD-ROM combo that covers his works from the early 1980’s to the release of Virtua Fighter 4.

Game Selection: 9
The Gameworks Dreamcast disc serves as one of the best compilations of old-school Sega arcade games to date by including

If you have played through Shenmue and Shenmue II extensively on the Dreamcast, you may notice that these games were playable in the in-game arcade. If you enjoy traveling to the Shenmue arcade, you may be content playing these games there. However, if you would like a more convenient way of playing excellent reproductions of these arcade classics, Gameworks serves as a great solution.

Port Quality: 9
As far as I can tell, every game seemed to be very close to the arcade counterparts. These did not feel like a cheap arcade remake at all, but instead felt like I was playing the games on a rock-solid version of MAME.

The only thing that might throw some people off is a few little adjustments in the game such as the Shenmue billboards on Hang On. It takes a bit away from the arcade authenticity, but it’s easy to overlook.

Affordability: 4
Since Yu Suzuki Gameworks was a limited Japanese release with a book, there aren’t a lot of copies floating around these parts. Lately the package has been selling at the $85 mark.

Conclusion
Not only does the Yu Suzuki Gameworks disc serve as a wonderful compilation, but the complete book and disc package serves as treasured collector’s item.

I love Yu’s Game Works, but how dare them not apply VMU save abilities for high score. i find myself playing Saturn versions just so i have something to look foward to, which is beating my old scores.

Wow… Never knew this one existed…

Just downloaded this for free online, like all my other Dreamcast games. Yay!

The real appeal of this lies in the book itself, not the game. The Shenmue hoardings in HangOn are sweet.