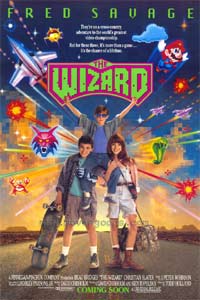 Some may call it one of the worst movies ever to be released on the big screen, but I actually didn’t mind this Nintendo-fanboy-flick when I was a kid.

For those of you that aren’t familiar with it, The Wizard is a 1989 movie staring Fred Savage that as IMDB.com puts it, is about “a boy and his two friends run away from home and hitch cross country to compete in the ultimate video game championship”

Anyway. it has just recently been announced that The Wizard is coming to DVD. I probably won’t buy it, but it might be worth adding to my NetFlix queue. If you don’t want to spend any cash, or you just would like to get a better feel for the movie, you can watch a variety of clips from the movie at 1Up.com or read this comical yet comprehensive summary of the flick.

Many people view The Wizard as one big Nintendo advertisement as it has countless commericial references. And even though it is exaturated in a number of parts and the acting is a bit cheesy, there is still something about the movie that has an interesting nostolgic feel to it.

Have any of you seen The Wizard? Share your thoughts in the Comments section below or in the forums.