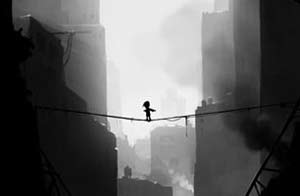 I know this topic has been discussed numerous times before on this site and others like it, but I just had to share a couple of recent examples of incredible concept games that show that not only show that you can make a incredibly engageing experience without 3D graphics, but you can also have that same experience without any colored graphics either.

I found the most recent example of this on the front page of Digg the other day (see Digg comments). This project, known as Limbo, has a style that seems to be a blend of modern-day Ico/Shadow of the Colossus and old-school Out of This World resulting in beautful platforming environment with realisic puzzle-solving elements. As you can see from both the video clips and the concept art on the project’s site, it aims to impress while maintaing the stengths of 2D gaming.

While the second project that I wanted to bring up isn’t actually a game in development, it also was featured on Digg a while back and has since gathered a lot of attention around the Net and I know I am not the only individual that would love to see it materialize into game form. This second example is known as Pirate Baby’s Cabana Battle Street Fight 2006 by Paul Robertson. It is essentially a video clip done in the style of an old-school beatemup game, but done with a 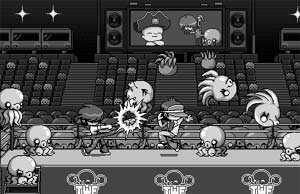 great deal of creativity and humor that actually tops that of games like Alien Hominid.

I’m not really sure what the point of this rant is, and I know, for the most part, I’m preaching to the choir, but I really hope projects like this get the attention of the mainstream gaming media and, in turn, gets noticed by game publishers.

While they might not appeal to all the kiddie gamers out there, I know for a fact there are a number of older gamers — hardcore or not — that would really get a kick out of games like these if given the chance.

Limbo would be perfect for the PSP