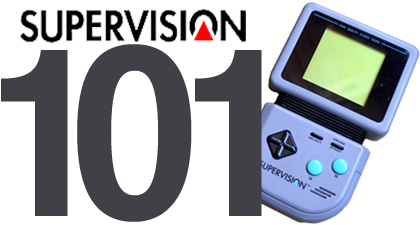 By 1992, Nintendo was crushing the competition in the handheld market with a piece of handheld hardware that was technically out of date when compared to its main sources of competition.  But with a little ingenuity, great battery life, and some serious gameplay, the Game Boy continued to hold its own against the likes of the Sega Game Gear and Atari Lynx.  The amount of success was enough to get many companies to take notice, and while some chose to try their hand making games for the beloved grey brick, a few others instead began speculating on how they could get a piece of the action.

Enter Watara, a Taiwanese company that figured it could take some of the Game Boy’s potential market if it released a product that was only slightly better in design and cheaper for the consumer to buy.  Thus the Watara Supervision was born.  But despite the technical improvements on the Game Boy’s design, the low price, the international releases, and the advertising, the Supervision failed to provide the quality of games needed to capture the market.  This fatal oversight proved to be its downfall, and the Supervision fell into obscurity, just another machine left on the roadside in Nintendo’s wake. 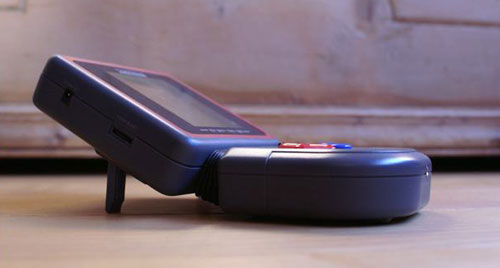 Some Supervision Game Carts via WiseGamers 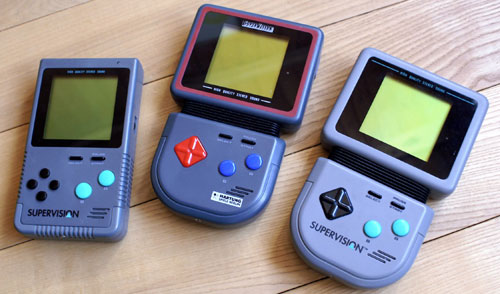 The Different Flavors of the Supervision via WiseGamers

November 9th, 2011 at 8:19am by racketboy
Obscure Handhelds
Tweet

I had that third version on the right of that picture. Used to play that all the time at recess. I finally sold it like a year or two ago cause the screen was starting to die.

That was a nicely written article. The only tweak I would suggest is in the part where you talk about plastic clamshells that get destroyed when opened. I think a lot of gamers think of clamshell cases as the boxes that Genesis games came in, which don’t get destroyed when opened. To differentiate, you may want to say something like “… encased in a clear plastic clamshell that you have to cut open.”

I think Ack said it right,Clamshell is what is used in retail for items incased in plastic that either pops open or most of the times cut open.Its also known for genesis cases but I think that was just used to explain they werent in cardboard.I dont see any need for an edit,Awesome guide Ack I learned something new today :}

Great read as usual Ack! I actually used to daydream about winning one of these on Legend of the Hidden Temple when I was a kid. In my head I imagined them as some sort of super-ultra advanced Game Boy.

Great read! I never heard of the Supervision.

That is a great feature of hooking up to the TV, maybe this would be the first handheld that had that capability?

Wow, I remember these things! I knew a girl in 5th grade that had one of these.

I remember seeing these in the stores and wanting one but could never get one.

Does anybody know of any emulators for this? I want to see if I can emulate this system on my PSP or Dreamcast lol.

Eastern Mind wrote a fantastic article on the Watara Supervision, which I had never heard of before. Now I so want one. For those of you interested…

That Gamester81! What handhelds does he not own yet?

I only ever encountered the first model. I wouldn’t even have known that other models existed. Maybe these were only released in the North American market ?

I remember playing only two games for it. Crystball, and another Isometric view platform game reminiscent of Solstice, but closer in looks to “Die Maüs” for Game Boy. Can’t remember the name of that Supervision game though. Hopefully you’ll make an article about Supervision games someday ?

Ah found the name to that game, that was “Chimera”. Awful sound effects, but I thought the game was quite good back then (never owned a watara supervision myself, but a friend at school had one, and he had that game, which is how I played it :P)

I got one of these on Craigslist with 7 games for 25 bucks. Pretty cool little thing. One of the games I got was a shmup I actually really enjoyed called Jaguar Bomber. It wasn’t too challenging but pretty decent and fun for that generation. I recommend it to all who get a supervision.

Great information. It is so hard to find any info about any of the games for the WSV. I will continue my search, but for now thanks for the down low and great pics. I look forward to tracking one of these down soon.

I bought it with my own hard earned money because it was half the price of a gameboy and apparently seemed promising. 99 vs 199 Dutch guilders. Wish I spend it on the gameboy… Crap system with crap games. Of course at the time I tried hard to like it ;). Gameboy succeeded because of battery time, marketing and QUALITY GAMES.

Hi, how are you? My name is Egoitz and I am a fan of retroconsoles. We usually organize basque tournametns of diferent retroconsoles in Bilbao (Basque Country) and now we are thinking about buying a Watara Supervision with some games. I know that you have this section in your site about this great handconsole. So one question: If we take some photos and write down the results about our I.Basque Tournament of Watara Supervision february or april o f 2022), would you add an article about it, maybe in this section? :
https://www.racketboy.com/retro/watara-supervision-a-beginners-guide

Or if you dont want to add a big text, at least some words and the last standings of our tournament?
Finally I have entered in a fan group of the console in facebook. I could ask members if they would want to particiapte in a High Scores competition and organize an online meeting and add this High scores of Watara Supervision games.

It would be fantastic!