After much debate we came down to a handful of options for the next game. We knew that many were thirsty for an RPG and we wanted to continue into the 32/64bit generation. We did not, however, want to settle for what some might see as an obvious choice. Sure, it would be easy to choose something like a Final Fantasy or Dragon Warrior, but most of us have played them to death already (and they are not out of the running, they were just not picked this go-around). Besides, you know how we love Hidden Gems around here.

So the choice came down to two epic games: Dragon Force on the Saturn and Lunar: Silver Star Story, which is on multiple platforms. After much debate, Lunar finally won out. This was not simply because it was released on the Sega CD, Saturn, PSX, and PC so that those looking for a copy would have plenty of options. It seems that none of the three of us have beaten (or even played, in some cases) the game recently. It is a shame, but we hope to rectify this over the next month.

Created by Game Arts, a company known at the time for Thexder and Silpheed and more recently for the Grandia series, Lunar was first released to the world on the Sega CD in 1992. In 1993, with a little help from the experienced but little known company Working Designs, it made its way across the ocean to the US (sadly it never made it to Europe) to very positive reactions. It sold amazingly for a Sega CD title and was received quite well where ever it went, second to only Sonic CD.

Lunar’s beautiful style, simplistic controls, and gripping story created an atmosphere that few other RPG at the time could deliver, technically or artistically. Anime styled cutscenes, voice acting, and an amazing soundtrack just sealed the deal; the game was a masterpiece to all who reviewed it.

For all the glowing praise the game never had the same impact with RPG fans as other titles and seemed relegated to Critic’s Favorite status. It was overshadowed by games like Final Fantasies IV & V, Phantasy Star III, and of course Might and Magic IV. It did have a revival on the Playstation in the late nineties, and another in the early 2000s on the GBA, but it never seemed to get the level of respect that it deserves (unless you consider Working Designs’ excessive packaging fetish). It has spawned an amazing sequel (Lunar: Eternal Blue) and a handful of spinoffs (Walking School – aka. Magic School, and Dragon Song), all of which are decent games.

The Lunar series may not have the “street cred” that the other RPG heavyweights have, but any fan of solid role-playing goodness would be remiss to pass on this series.

There are a number of ways to play:

The Sega CD version is the original and probably the easiest to emulate if you are going that route, but if you want the very best the PS1 version is considered to be superior with its enchanced visuals and extra story bits. The Saturn/PSX/PC versions changed some story elements and events from the original but sticks to the core decently well. The GBA version wanders a little further still from the original source.

It’s safe to say that no matter which game you pick you’ll get the same core story and find yourself playing largely the same core game. On the other hand, the differences and enhancements might be enough to offer significant replay value. Those of you who are really intense (and speedy) about playing RPGs are encouraged to start with the Sega CD installation and, when finished, dip into one of the later titles to compare and contrast. And be darn sure to share with the rest of us, all of you, no matter which version you decide to tackle.

If you would like a little more perspective of how the different variations are from the original Sega CD game, here is a quote from Lunar’s Wikipedia entry:

“Lunar: The Silver Star has been re-released several times for a number of consoles, often with graphic and sound enhancements as well as an expanded script. The first such remake, Lunar: Silver Star Story, originally appeared on the Sega Saturn in Japan on October 15, 1996, and featured redrawn graphics, a polished script, and new music by Noriyuki Iwadare. This version was soon expanded in July 1997 with the addition of an MPEG expansion card that allowed full-motion animated video playback interspersed throughout gameplay. The updated MPEG version was later ported to the Sony PlayStation in 1998, and was eventually translated into English by Working Designs for a North American release in May 1999 under the title Lunar: Silver Star Story Complete. A Windows PC version was released the same year exclusively for Japanese and Korean audiences, with the North American version later cancelled for “technical issues”.[36]

The second major remake, Lunar Legend, was released for the Game Boy Advance in Japan and North America in 2002. This version features redrawn character graphics, yet lacks the full-motion video sequences of its predecessor, instead using captured still images. The story was reworked to better coincide with the official Lunar: Silver Star Story Complete monetization, adding new scenes while omitting others. The background music contains down-sampled versions of songs from the PlayStation and Saturn remakes.”

Since there are various ports of Lunar, there are also various ways to emulate them. If you want to emulate the Sega CD version with Kega Fusion, you can check out our Kega emulation guide. ePSXe will also emulate the Playstation version if you want to go with that. If you need assistance setting up any emulator, please post your question in the Emulation section of the forum.

If you have the Sega CD version, here is a downloadable copy of the original, official strategy guide. 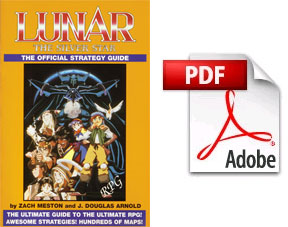 Otherwise, I actually couldn’t find a lot of strategy stuff for Lunar, but here are some GameFAQs walkthroughs

Instead of posting in the comments section of the blog, we will be using the forum for all of our discussion in order to keep things more organized. So get your hands dirty with Lunar: Silver Star Story and talk to us about your thoughts in the forums. We want to know your tactics, your strategies, your successes and your failures.