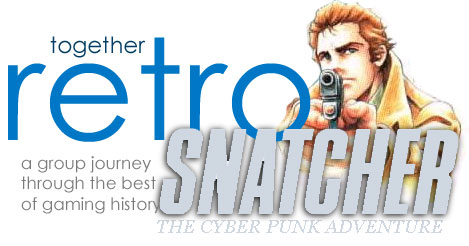 Gibson may not have started the cyberpunk genre, but his works are often regarded as expert examples of the genre. Like Gibson, Hideo Kojima created one of the best examples of cyberpunk, however his is obviously a game instead of a novel. This game is known as Snatcher, or that Sega CD game that cost an arm and a leg. Yes Snatcher, an interactive adventure game that supports lightguns. It is a one of a kind game and it is what we are playing for Together Retro for this month.

Originally developed for the MSX, Snatcher was also released on the Saturn, Playstation, PCEngine, and of course the Sega CD. Coming early in Kojima’s career Snatcher was a bit of a gamble. While interactive fiction/adventure are common in Japan, there are more Dating simulators than adventure games, and more fantasy than scifi. Couple that with cyberpunk, an already difficult to sell genre, and you have a product that has gamble written all over it. Well it paid off, the fact that it was marred by a poor run outside of Japan only leads to its mystique.

While the game does draw from many popular scifi films, ie Blade Runner, it takes them and adds them together to make a game that is unique. Many complain the game is quite short, it does not over stay its welcome though it does leave you with some questions.

Snatcher is unique in that you use the controller, a lightgun, or a combination of both. If you use the controller the C is your confirm button, while B is back, and A is used for firing your side arm. However when using just the lightgun you just have to have good aim. I suggest the dual mode, lightgun and controller. If emulating a Wiimote and Perfect Shot is a great alternative to the Justifier.

While it was released on the MSX, Saturn, and Playstation in Japan, the only version ever released in English was on the Sega CD. And wild it was decently localized and censored, it still carries the same story (most of the censoring was nudity and they mainly cleaned up what could be considered copyright infringement). So if you cannot read Japanese, unless you are really up for a challenge, the Sega CD/Mega CD version is the only way to go.

Instead of posting in the comments section of the blog, we will be using the forum for all of our discussion in order to keep things more organized. So play Snatcher and talk to us about your thoughts and play experiences in the forums. We want to know your favorite parts, your successes and your failures
Snatcher General Discussion

I played through snatcher on the sega cd last year and it is one of my top 10 games of all time.I LOVE THE GAME!C’mon project S!

BTW, the MSX version was almost completely fan-translated a few years ago.

I haven’t tried all the ports but from what I read, it seems the Sega CD is one of the best if not the best.

The MSX2 version (and PC) don’t have an Act 3. The Sega CD faulters slightly with color reproduction, but to many makes up for it with the inclusion of light gun support. One scene is removed (the porno scene), some nudity covered up, and some manga characters in ads are changed to Konami characters. The PlayStation version is censored the heaviest, toning down the sex AND violence. The Sega CD also gets a some content not found in other versions, including a close-up and some extra content in the opening and ending, as well as a few different songs for the ending.

Either Sega CD or PC-Engine are the versions to own, with the former eding out the latter with better sound and light gun support. Videophiles (some say the color difference is minute, but any screenshot says otherwise) and those looking for uncensored content should look toward the PC-Engine version, though only one version being localized should make it an easy choice for most. There litterally isn’t a Japanese Sega CD version, making it a rare case (particularly for the time) where English players get a few bonuses that Japanese players did not. Makes me wonder if anyone translated the Sega CD version to Japanese…

Cyber Punk not being popular in Japan? I’m sure Akira and many other cyber punk manga and anime were popular by this time. Werent they?