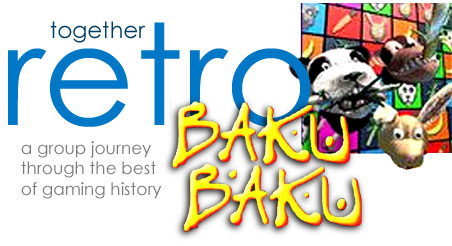 In 1995 the video game puzzle scene was changed forever. It in was that year that Sega released Baku Baku, a revolutionary puzzle game in the falling block genre. Of course everyone knew this since Baku Baku is a house hold name… Sarcastic overtones aside, Baku Baku is an arcade puzzle game ported to most Sega consoles and for the most part has gone unnoticed by the general gaming population. Well lets change that. This month for Together Retro, gear up for your attempt at being a zoo keeper and its feeding time.

As stated, in 1995 Baku Baku was released in the arcade on the Sega Titan Video hardware. Little fanfare was heard for the arcade release, but the next year it got its biggest boost in popularity outside of Japan. In the spring of 1996 it was released on the Saturn and it was given high marks by many gaming publications – Gamepro even gave it a 5 out of 5 in fun factor.There is not much one can say about the history other than it is a good game that was overlooked by most of the gaming population. Even though it is unneeded, the story for the game is that you are trying to become the royal zoo keeper and must compete with others for the title. If you have ever played a puzzle game the gameplay will be familiar. Simple left or right turn buttons and a joystick are all that you have but as you can imagine, that’s not all there is here.

In Baku Baku blocks come in two types, food and animal. Their may be five of each type of block, but they are still only food and animal. A simple paring mechanism is in place here, ie Dog and Bone, Panda and Bamboo. So when a dog block and a bone block touch, the dog block becomes a big dog head and eats the bone block, and all attached bone blocks. This, of course, leads to combos and endless bizarre gameplay concoctions.

Unless you have the original arcade machine hanging around, you’ll probably want to go for the Saturn version if you have the console handy. (You can also try playing it on an emulator like SSF ).

You could also try get your hands on on the Windows 95, Game Gear, or Master System release. The nice thing about puzzle games is they typically transition well to less powerful hardware. Of course, the Game Gear/Master System versions will emulate easily on a variety of devices.

What do people see in this tetris clone? Probably the easiest and most generic feeling game of its kind, at least judginig by the 8-bit versions.

I guess you definition of Tetris clone is pretty broad..?
I guess you don’t like Puzzle Fighter either?
Columns I could understand the feeling, but I feel that Baku Baku has an interesting enough spin to it.

Cool 🙂 Thanks for sharing the vid link
It is rather similar to Puzzle Fighter — and like you mentioned, it is a little trickier for your brain to think about what you need to match up, but I guess I enjoyed the extra challenge. It was like a little mini part of Brain Age thrown in 🙂

Haha I’ll have to try this one out now. I’m glad you went with something not everyone has played though!

Best puzzle game EVER imo. Thanks for letting people know about it 😉

Wow, Racketboy, I had no idea.
Looks like alot of fun.
Thanks for going with an unknown gem.
I like puzzle games alot, never looked at this!
The sms version looks like a port of the Game gear. (small area) so no other version exist? playstation?

I want to thank you, racketboy, for recommending this game on your Hidden Gem section for Sega Saturn. Took me a while to find a good price on a complete version. But time wielded a classic puzzle gem. One of the few I truely enjoy day after day with my daughter.

@Racketboy: I do like Puzzle Fighter. It is intense, challenging and visually pleasing. This one (8-bit) isn’t any of those. I’ve yet to play the saturn game but it looks the same gameplay-wise.

@d, I’m pretty sure it hasn’t been released elsewhere.
I don’t think it sold very well — surprised they didn’t rename it for the English-speaking world.

i first played this on a saturn demo that also had playable versions of 3 dirty dwarfs, virtual on and bug 2. i would play the demo until i was old enough to get a job and buy a new copy for 20 dollars back in 1999. this along with dragonball z legends and x-men vs street fighter were my favorite games. and the first tomb raider as well. after reading your articles i bought a modded saturn about a year ago to relive these memories, not to mention my frustration with emulation. its just to slow. great article.

I had actually never heard of this game until i saw it on the list of upcoming topics for Together Retro. I went out and picked up the one my local retro game shop had on the shelf for like 9 bucks and me and the wife played it for hours it seems. Great fun and a good article again

We had lots of fun playing this game, usually while having a few beers before hitting the town. It was so fun that we often missed the train (which ment 30 min more gameplay). Still as fun today! As mentioned, two player is a must.