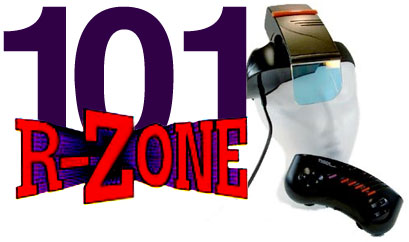 Here at Racketboy.com, we don’t often talk about LCD games.  They’re not really under our purview, so to speak.  But they do have a solid relationship with video games, and in some cases, this bleeds over into definite video game territory.  Sometimes it’s as simple as a character appearing in a game(Game N Watch in Super Smash Bros. Melee, anyone?), but in a few others it forms a weird hybrid area which fans of both might appreciate or shun.

The R-Zone is one of those hybrids, created by Tiger Electronics in the mid-1990s as a cartridge-based LCD handheld.  It was the first of two handhelds from the company, the second being the Game.com.  Add in Tiger’s access to many video game licenses, and you’ve got some interesting title choices for their little machine.  So sit back, relax, and enjoy taking a moment to learn about Tiger’s strange little red-tinted toy. 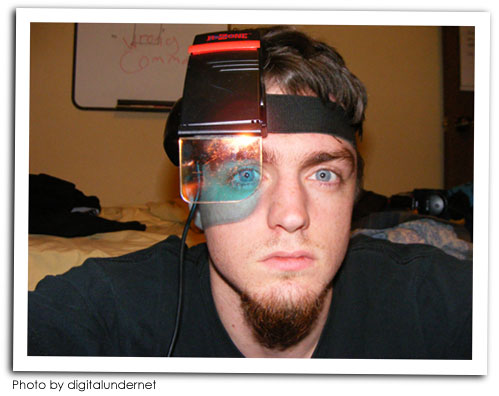 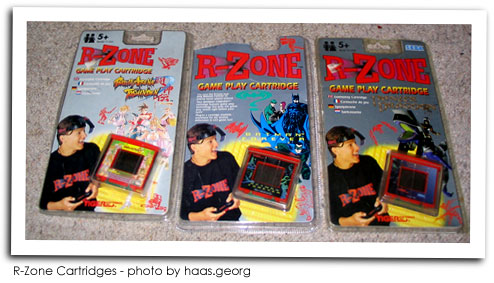 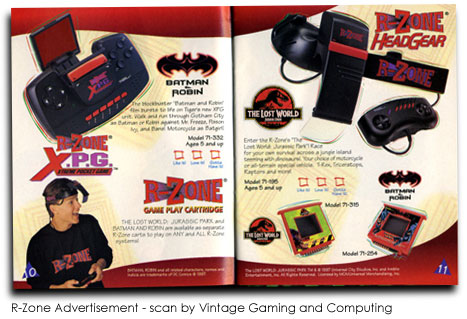 This my be one of the crappiest “consoles” I’ve ever seen but it’s awesome in a cheesy 90’s kind of way.

Is this going to be added to? This looks like an interesting bit of tech at least, and I’d be interested to see any screenshots, lists of games, etc. Anything that might lessen the mystery around the device.

Also: on the Super Screen, you say it has an adjustable mirror, then two sentences later mention it not having any mirrors which is confusing to say the least.

As always though, great article! I love these 101 articles, really helps out with the more obscure consoles.

Well if anyone has anything to add, they can let me know and I can plug it in.

But thanks for the feedback and the support 🙂

R-zone was a complete piece of garbage and I am really surprised that you wrote something about it. What is even more amusing was that you wrote a “strengths” section considering it had no strengths.

Although I suppose it does have a place in video game history, although I am unsure if I would consider it one.

Yeah, I don’t think anyone here is recommending that everyone go out and buy one.

But we thought it would be fun feature some obscure stuff here and there. And I think that’s kinda why this one is shorter…

It isn’t as terrible as some would make it sound, but the fault was a lack of inventiveness in the games. No thinking outside the box. Game.com was a much bigger leap forward, but still had the same problem.

Stuff like this is exactly why Racketboy is the best videogame website, period. A really well written article shining a little light on a weird and obscure “console.” Articles like this are why I keep coming back here.

Hey thanks a bunch! It’s always nice to hear things like that 🙂 But my hat’s off to Ack for taking the initiative on this one — it was all his idea 🙂

Thanks for a very nice article!

Just like Lokkenjawnz said it would be nice with some screenshots. A quick google search doesn’t give many real screenshots.

One interesting thing about this console is that there was a Panzer Dragoon game made for it, which is most likely a hell of a lot rarer than Panzer Dragoon Saga.

That is pretty true about the rarity thing.
Although… as Final Fantasy VII has taught us, rarity does not equal value 🙂

thats a good point, but i thought it was rather obscure that the system even had a pd game.

I’m really glad there is an R-Zone article now. It’s one of the systems I was always really curious about, but have never experienced. I would love to see this fleshed out a little, but I guess there aren’t too many people out there with real play experience with one.

It’s cord not chord. A chord is three or more notes stacked on top of each other that are played at the same time.

I owned both a R-Zone head gear and XPG…..well I really wanted it at the time, and my parents refused to let me get a Gameboy or Gamegear so the R-Zone was the closest thing. It cost $30 for original head gear unit and the games were usually under $10 each, and later sold dirt cheap on clearance. I think the XPG was slightly more expensive, like $45 or so. The head gear unit I thought was going to be really cool because they really marketed it hard. I saw countless commercials for the R-zone, which as a kid made me really excited to play it. It really did look futuristic and remember this was a time when “virtual reality” was the latest craze. The reality of the head gear unit was that it was a chore to play. You basically had to close your left eye while playing, or play in a dark room. It was too hard to focus with only one eye and just felt weird. You could slightly see through the flip down screen so again, playing in a dark room was ideal. The actual gameplay was next to worthless, because it was just like all the other Tiger LCD games, only in red and black. This was VERY disappointing to me when I realized that, because the commercials made it look like there was intense action in the gameplay, and made it look like there was at least some immersion. But no, this is the exact same tech in the cheap LCD games. All the games were virtually the same and just had different names. I remember the best game I had was mortal kombat which played out like a regular fighting game, but the punches/kicks/specials were all pre-drawn canned animations that played one or two frames to show the move and then the characters that got damaged would blink a few times. Hopefully this is adequate to show you the games were nothing special and mildly entertaining at best. If you are any older than 10 years old it was probably no fun at all, but the coolness of the headgear and the commercials made it tolerable and even somewhat fun back then.

The XPG was better for portability and generally not looking like an idiot in public. I remember taking it on an airplane and playing it most of the way – again, parents wouldn’t allow me to get a Gameboy at that time so I had to make due. The XPG’s screen was kind of unique – when you’re not playing it folds down into the top of the unit, so the reflective part of the display is protected and the unit is more compact and can fit in a case easier. Then you can flip the screen and pull it out slightly when you want to play, and the game is projected onto the screen from the cartridge window, similar to how the old projector arcade cabinets worked. That’s why it looks so bizarre in the screenshot, if you were to rotate the image you would see that the actual screen of the XPG is about 2 inches back (i.e. 2 inches closer to the floor, if you’re holding it in your lap) from the face of the unit where the buttons are. The screen itself was not the same as the headgear, it was essentially a red-tinted mirror, most likely to diffuse the red light being projected from the LCD cartridge. The speakers were average and the sound was unimpressive but I remember it getting sufficiently loud, probably somewhere in between the Gameboy and Gamegear max volume.

Overall I was pretty disappointed with those consoles, and rightfully so. But they are still fun little memories that I look back fondly on.

does anyone know where to get replacement screen because i found one in an abandoned building and it was missing a screen. so if anyone knows plz reply

My brother dug out his old one and gave it to my 6 year old son, he loves the thing! Even though he’s used to playing the PS3 and PSP, he still thinks the R-zone x.p.g is brilliant, he brought it to school and all his friends were fighting over who could have a shot, He wants me to find more games for him because he only has the star wars one, not going to happen!

If anyone knows where to find a few besides ebay, I’d like to buy a few. I’m looking into repurpusing but need the tech

It was a system I’d forgotten. I had one for a short time but don’t remember parting with it. After getting one in near perfect condition but still playable I was pleased. My two sons (11 and 13) were amazed how the mirrored lens displayed the gameplay.

I think I even had one of those! Haha I feel so dumb now. As a kid I was so impressed with that whole head mount thingy. XD