Oh Sega… you were such cunning marketers in the early 1990’s.
We all love the Sega Scream campaign and Sonic’s extra ounce of attitude that, in our minds, gave him the advantage over Mario.
However, once Sega attempted to move faster with their technology in order to stay a step or two ahead of their competition, some of the advertisements tended to exaggerate reality a bit more than normal. Take a look at this ad I pulled out of one of my old magazines (see text below)… 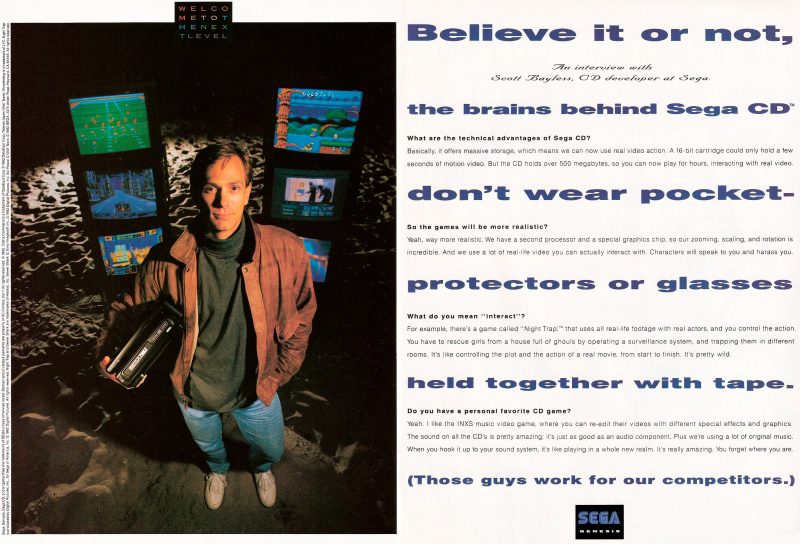 What are the technical advantages of Sega CD?
Basically, it offers massive storage. which means we can now use real video action. A 16-bit cartridge could only hold a few seconds of motion video. But the CD holds over 500 megabytes, so you can now play for hours, interacting with real video.

So the games will be more realistic?
Yeah, way more realistic. We have a second processor and a special graphics chip, so our zooming, scaling, and rotation is incredible. And we use a lot of real-life video you can actually interact with. Characters will speak to you and harass you.

What do you mean “interact”?
For example, there’s a game called “Night Trap:— that uses all real-life footage with real actors. and you control the action. You have to rescue girls from a house full of ghouls by operating a surveillance system, and trapping them in different rooms. It’s like controlling the plot and the action of a real movie, from start to finish. It’s pretty wild.

Do you have a personal favorite CD game?
Yeah. I like the INXS music video game, where you can re-edit their videos with different special effects and graphics. The sound on all the CD’s is pretty amazing; it’s just as good as an audio component. Plus we’re using a lot of original music. When you hook it up to your sound system, it’s like playing in a whole new realm. It’s really amazing. You forget where you are.

Looking back, it’s easy to see how all these statements were blown out of proportion. I mean, we still don’t have many games that really live up to that kind of hype a decade later. While the Full-Motion Video was a rather cool gimmick at the time and I was rather blow away by the audio in some games like Sonic CD, I don’t think I was that excited.

I personally enjoyed the Sega CD a great deal (and still do), but of course, I didn’t spend a couple hundred dollars on it. It’s easy to understand how Sega fans quickly turned away from the company after it hyped up these add-ons without a great deal of follow-up. This particular advertisement is just one of the many mega-hype pieces that Sega put together. If you’d like to see some game specific ads filled with hype, take a look at the Make My Video and Sewer Shark ads.

Do you have any other great Sega CD ads you’d like to share? Feel free to post links in the comments section below in addition to sharing your thoughts on the Sega Hype machine of the mid 1990’s.

Heres an ad promoting the 32X and the Sega CD

Loved how it shows the Amstrad under the sheets, it shows how harsh Sega was to their competitors.

Hated the Kid who is in the ad, makes me want to burn him >:(

Back in the day I was a snes fanboy but I owned a genesis also. My rich cousin had only a genesis+all the extra add-ons, controllers etc. He would talk the snes+nintendo sucks routine and I would play the well all that crap added is just an attempt to bring the genesis up to par. Good to know I was right 😛

The CD machine was an excellent idea, but it was poorly marketed, not because of the hype, but I think it failed more because of the 32X also. With too many add-ons in the market no single one could truly be focused on. It’s sad to think back, both the CD and the 32X had a lot of potential.

I always liked this lengthy, 8 minute European commercial for the Mega CD.

this is all crap…. the only reason Sega CD didn’t work is because most of its games were the same 16 bit experience people already had with the genesis/snes for many years, just that with audio cd quality music and BullShit 3-hour videos, but the core games were exactly the same 16-bit platformers/action/shmups people already knew….. the biggest proof of this is that most 16 bit machines with optical media failed: philips cd-i, atari jaguar, panasonic-3DO, etc, etc. but when the machines really became graphical powerhouses and the 3D Big Bang began, then the CD really became useful: PlayStation, Saturn (not as big success but not because of games but because poor marketing-sega fans betrayed after the genesis crappy accessories-and less 3D capable than PS and N64.

I remember way back in the day Discovery Channel had this show on Sunday Mornings where they would go over how they did special effects in different movies. Well, the one episode turned into a 30 minute advertisment for the Sega CD when the whole show was dedicated to Sewer Shark. Made the game look really really good, but there was no way my parents were going to drop that much when they had only JUST got me a Genny 2. Oh well.

Reply
Pingback: PoisonMushroom.Org - Combing the Net So You Don’t Have To » Blog Archive » Points of Interest - 6/23/07

nice pull there, racket. ah, the days of aggressive sega advertising. with nintendo’s evil exclusive third-party licensing contracts, who could blame sega? name calling and boasting was all they had really (aside from some good games). “sega does what nintendon’t”? come on!

That is true about the Nintendo thing, but wasn’t that done with by the time the Sega CD came out?

I always liked Snatcher, Keio’s Flying Squadron, and Nighttrap.
For some bizarre reason, I used to like Corpse Killer, but when I played it recently,
I couldn’t concentrate, due to the zombies body popping towards me. 🙂