The Vectrex home game system (read up in our Beginner’s Guide) is one of the coolest little consoles from the early 80s.  It’s upright all-in-one design, its vector-based graphics and colorful screen overlays are meant to replicate an arcade experience in ways that systems like the Atari 2600 could not.  It was only on the market for only two years, so its understandable that the game library isn’t large.  However, the limited lineup and the high collectability of certain games reminds me a lot of the Rare & Valuable Sega 32X guide we put together a little while back.

Below you will see two prices beside each title. The first is the average selling price for loose games. The second price is the highest price in the past three months, which is usually the price for the a complete game.   The list is ordered by the balance of the two prices.

Vectrex games also have the screen overlays to consider, so the mid-range value of prices can heavily be determined by if that is included or not. 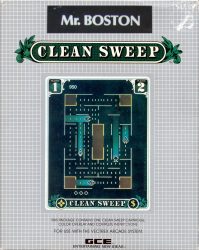 In the early 1980s, we started seeing some consumer products brands start to release video games with their branding for promotional purposes — many times simply for internal promotion. One of the better known examples of this was Pepsi Invaders on the Atari 2600 (see it mentioned in our Atari 2600 Rare & Valuable guide) that was released in 1983.

That same year, Mr Boston, a hard liquor brand, worked with developer GCE to customize their Vectrex game, Clean Sweep into something they could distribute with their branding. Pepsi Invaders made a bit more business sense as the Atari 2600 was rather mainstream and Pepsi had a larger business, but perhaps this smaller brand thought they were more cutting-edge with going with the vector-based Vectrex.

Anyway, the original Clean Sweep game is a Pac-Man clone in which you control a vacuum cleaner that navigated through a maze of dots that needs to suck up money that robbers are trying to steal.

In the customized Mr. Boston promotional game, there is not only an ad for the brand before the game starts, but the player controls a top hat (part of the Mr Boston visual branding) to suck up the money. The game’s box had a Mr. Boston sticker on it and the game’s overlay was had the Mr. Boston name and logo running up either side.

There has only been around a dozen copies of Mr. Boston for the Vectrex to surface in the last couple of decades (in various states of completion), but the total number of units produced is unknown.

Check for Mr. Boston on eBay 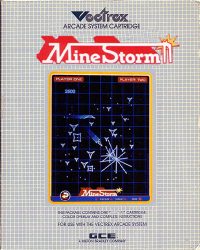 Much like Clean Sweep was an off-brand take on Pac-Man, Mine Storm was an Asteroids clone that at least had the advantage of replicating the vector-based look of the original Space Invaders arcade game. Mine Storm was a well-done creation and ended being at built-in title for every Vectrex system.

With a lot of early Vectrex owners spending a great deal of time with Mine Storm, a lot of players noticed a glitch in the game that would cause the action to “freeze” at or around the 13th level. Enough people complained to the company that a corrected version of the game was sent out on dedicated cartridge and was referred to as “Mine Storm II”.

It’s also worth mentioning that the bug is not present in later built-in versions of Mine Storm. So between this later fix and the fact that a lot of players never made it to level 13, the send-outs of this special cartridge were quite limited.

Check for Mine Storm 2 on eBay 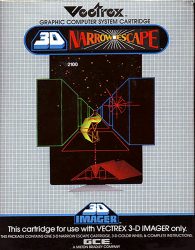 Not only was the Vectrex rather innovative in bringing a vector-based arcade-like experience to the home, but it also was early into the bringing a 3D-like experience to their system. The 3D imager add-on was the first of its kind, predating the Sega LCD goggles, by four years. The 3D Imager was released in early 1984, but was soon discontinued after a short production run as the Video Game Crash happened later in that year.

With the 3D Imager itself being in rather short supply, you can imagine individual games are in even shorter supply. The trickiest to track down is 3D Narrow Escape.

For those new to the Vectrex, I’ll point out that game that support the 3D Imager had “3D” at the beginning of the titles. Some of the 3D games were newer, enhanced versions of existing Vectrex games. However, 3D Narrow Escape was exclusive to the 3D Imager at retail. However, later on, Fred Taft later released a hacked 2D version of the game that does not require the 3D Imager to play.

3D Narrow Escape is pretty tricky to find in the wild and we typically only see a unit show up every month or two and while its definitely hard to find complete copies and there is a strong premium, there’s not a ton more loose copies being listed than complete. 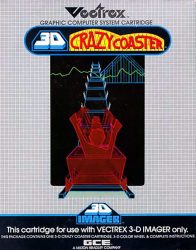 Here’s another exclusive to the already-rare 3D Imager mentioned above. 3D Crazy Coaster is a rather interesting experience that puts you in the perspective of being on a roller coaster. The gameplay element is to optimize riding the coaster as fast and far as you can (without falling out!).

You can control the speed while it also also lets you lean left or right, duck, raise your arms or hold on tight. Timing of these controls in different scenarios will determine how fast you go and/or cause you to fall out.

3D Crazy Coaster is about as hard to find as 3D Narrow Escape above, but perhaps the demand isn’t quite as strong for this one, even though it is strongly compelling. Units do also seem show up every month or two.
Check for 3D Crazy Coaster on eBay 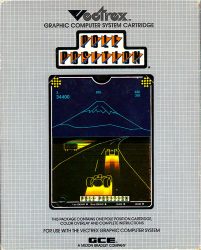 It is especially neat to see a licensed arcade classic come to the Vectrex and I recommend you check out some gameplay footage of this adaptation of this classic on the Vectrex.

While the modest color tones of the game’s overlay doesn’t capture the full color of typical Pole Position fare, its really neat to see the game transition to a full vector design instead of the pixel-based artwork. It’s fun to watch in motion and the explosions are especially fun to observe.

A 3D Pole Position for the 3D Imager was planned (and had the logo even listed on the back of the 3D Imager box) but ended up not being released.

The Pole Position release isn’t super hard to find, but it did come later in the system’s life and it often a top priority to add to a collection.

Check for Pole Position on eBay 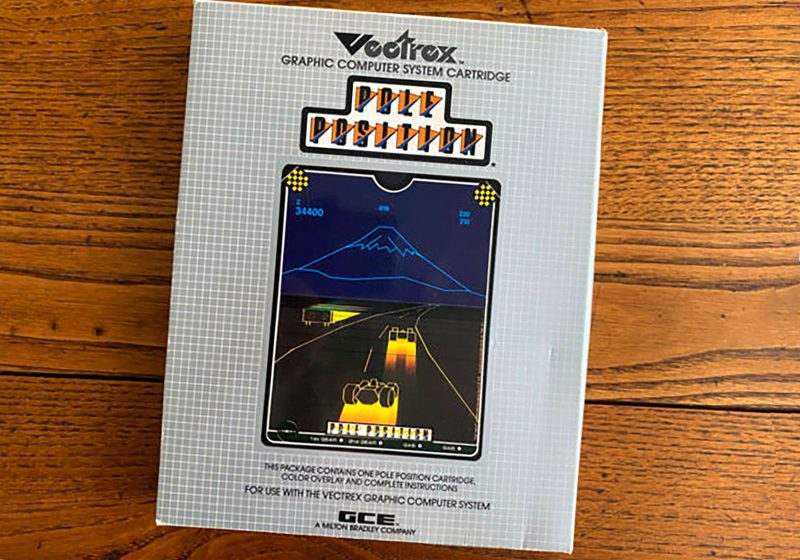 When I started to focus more on collecting in the late 90s, this was a system that I came across frequently, but ignored for the likes of import Saturn games and things like Rondo of Blood. Now I’m kicking myself because it is one of the few systems I don’t have any representation for, and prices are getting to the point that it’s hard to get anything more than a piece or two at a time, if your lucky. It’s a cool piece of tech from a period where innovation was handcuffed by technological restraint, but ambition burned bright.

For sure. I’m in the same boat. Always been on my “someday” list.
Give me a Vectrex over those Arcade1Up cabinets any day 🙂

Mr. Boston, luckily, doesn’t seem to have been a retail release. More than 5 copies have turned up, btw- about a dozen or so in various states of completion. As a Vectrex collector, I’ve been keeping track of this (a personal Vectrex grail that I don’t yet have), and the other original rarities. By original, I mean something that was available during the retail lifespan of the system.

As an aside, it’s worth noting that Vectrex is one of the few platforms that has full homebrew games outnumbering the original releases!

Also, the two recent auctions for copies of 3D Narrow Escape and 3D Crazy Coaster that ended so high were flukes. They normally don’t sell anywhere near those prices, but then again we aren’t living in normal collecting times…

Anyway, a few other original rarities to keep in mind: the carrying case, the Japanese Bandai system and branded games, the European release of the Light pen (horizontal instead of vertical box orientation), the Dark Tower manual (itself a story- it was a planned release but you could buy replacement manuals back in the day and some copies of the Dark Tower one did get sold), and of course the 3D Imager itself, especially if boxed and if the foam band is intact. You also have the coin-op Minicade bartop that was a neat woodgrain arcade case for the system, and then you have various test carts and even an “Engine Analyzer” cart that allowed the Vectrex to be used in auto body shops!

Getting into the rarest and most valuable homebrews, well- that’s a whole ‘nother article!

Wow — thank you for the feedback! Always nice to hear from a dedicated collector for a platform I’m writing about. I’ll update the approx numbers for Mr Boston.

And yeah, there’s craziness on a lot of resale prices on many platforms these last couple of years. But those are just the high range. I try to emphasize that the high price is not necessarily typical but a best-case scenario.

I did notice the homebrew market, but I did make a conscience decision to hold off on covering it this time around. There’s always room for me to add it as a section on a later revision if there’s enough interest.

But if you’re ever open to it, I’d be honored to collaborate with you on future revisions 🙂

Take care and thanks again!

The Vectrex has such cross-over appeal to console collectors and arcade collectors. There’s several arcade collectors I know that do not care about classic consoles but have sought out and have a Vectrex.
It is such a forward thinking system. Four buttons, a good analog controller, a true arcade vector display, fantastic build quality.
Back when everyone wanted a system and a multi-cart, I saw value in getting the original carts. Often they were loose, but that was okay. Even at auction supply of the originals was always thin. I got my system online with a tiny spot of burn-in in the center of the screen but otherwise working. The controller analog stick needed a rebuild using springs from a 2600 cart. No biggie! It turns out the burn in on the screen was when the original owner turned up the brightness to be able to see the hidden mines in Minestorm past the famous level 13 bug. Makes sense to me!
The latest game pickups for me were expensive but worth every cent: Vector Patrol and Vector Pilot, straight from the author. They are perfect arcade recreations of Moon Patrol and Time Pilot, but built specifically for the Vectrex. Amazing quality to everything.

Love this comment — I appreciate you sharing your thoughts!
Carry on 😉