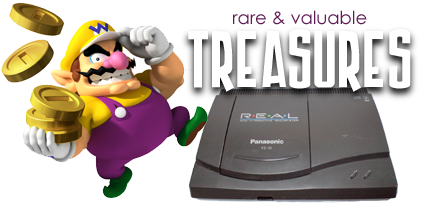 We do our best to keep our Rare & Valuable series updated and useful, but we have been missing some of the more obscure consoles from our guides.   Our first step to filling in the gaps is by tackling the 3DO Interactive Multiplayer.   While there aren’t a lot of high-demand cult-classics on the 3DO like there is on more popular platforms, the console isn’t without its collectors and rarities.  The 3DO game packaging also makes it a challenge for die-hard collectors.  It is becoming harder to find complete 3DO games in their cardboard, longbox packaging (which gets damaged easily over the decades)

Below you will see two prices beside each title. The first is the average daily selling price, which is typically the going rate for the game with only its jewelcase. The second price is the highest price in the past three months which is usually the price for the complete-in-box or possibly a sealed game. The list is ordered by the balance of the two prices. Note that some of these games are not rare in the sense that there are not many available, but rare relative to demand, which makes the games expensive.   In stark contrast to the Cheapest Games series, this series will round up the rarest and most valuable games for a given console or handheld so you’ll know what to look for whether you are buying or selling.

Special Thanks: I wanted to say thanks to the RB forum community for helping put this together, especially AgentBurnwood and pepharytheworm, who shared the most info 🙂

Additional 3DO Games of Value

I just sold Crash m Burn (korean) for 700. I got Lucienne Quest for sale now!

I have an FZ-10 and is the original owner from back when there were still being sold in stores. I also had a Goldstar, but sold it when I was about 14 because I needed money. Anyhow, I have a lot of these games in my library, however sadly some of them are only burned copies. I once owned many on the list, but also sold those log ago. I’ve since re-downloaded many of them as ISO and burned them, so they play absolutely fine now. I still regard this system as one of the best systems of all time and I still play it regularly. I feel it was highly underrated.

I have a 3DO FZ1 and always loved it since it came out. So was here just to see if by chance I hold any titles of value.

According to this list, my most valuable game is my Star Control 2 copy. Unfortunately, I can only find the jewel case at the moment, I know the box is around but in bad condition and it has been years since I’ve seen the manual. My favourite game of all time so it gets played a lot. Even helped out in finding a bug on the Ur-Quan Masters remake.

I have about 25 games in total, most original copies and a couple of them are burned copies(from rentals).

I have run into a copy of Plumbers Don’t Wear Ties at the rental store we got 3DO games from when I was a child. However due to my age, and the restrictions on the box we never got that game. Seeing the video from AVGN it would have been a huge let down anyways.

One of my favourite games for the system is Battlesport(which I don’t see around much). My friends and I would play that game a lot against the computer and each other).

Hey,
My x husband left this old 3DO machine behind. He has also left me and my children destitude with bills as well. Is this system worth anything and if so do you know who I may contact to sell it. It is in good condition. I know some of the games are around the house, but I am not sure of the condition of the games, but I know the system is in good condition. Has been sitting in a box for years and hasn’t been played at all. Just trying to make some extra money even for groceries for me and my kids. Please someone let me know if they can help or would like to buy it.

You left off road rash, mad dog mcree, space ace, dragons lair and that one where your a cop and you shoot bad dudes.

Well I got the dino park Tycoon, I got a couple of months back for £400+