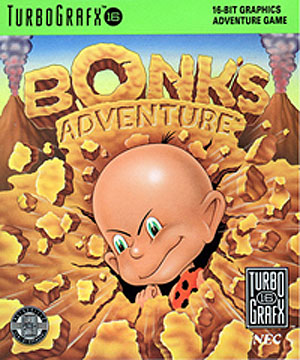 Overall, the Bonk series is fun, light hearted, and has timeless game play. Throughout Bonk’s platform games you’ll be smacking baddies with your noggin and dive-bombing your enemies, head first. Bonk’s movement is a bit slippery, but once you adjust the game is quite fun. In addition to dive-bombing and head-butting, you can chew your way up cliffs with your teeth, swim up waterfalls, and spin around in the air to float (indeed, float) slowly down to earth by starting a dive-bomb, pulling back out, starting it again, ad infinitum. This defining TG16 game is one of the more common titles and can be found easily for an afforable price.
Shop for Bonk’s Adventure on eBay
Shop for Bonk’s Adventure on Amazon.com

Alien Crush: $9
Pinball was never as surreal as this. Alien Crush featured a creepy theme and set the standard for video pinball games. These classics have been inspirations for newer pinball games such as Pinball of the Dead and Odama while maintaining their status as solid games in their own right ever after a decade has passed. The title still hold up quite well by today’s standards and is a respectible value on the TG16.
Find Alien Crush on eBay
Find Alien Crush on Amazon.com

Neutopia: $9
Yes, Sega and Hudson both had their Zelda clones for the 8-bit era. While Neutopia is one of the most shameless Legend of Zelda clones ever created, from the birds-eye perspective, to the basic item-based gameplay, to the overall structure of overworld and underground labyrinth exploration, it also happens to be one of the best of the genre.
Find Neutopia on eBay
Find Neutopia on Amazon.com

Ninja Spirit: $13
This platformer and ninja-love fest gives Shinobi a run for its money. The TG-16 keeps the graphics looking pretty close to the arcade original. In fact, even the music was a good port job. Back in the day, it amazed the gaming world with its precision graphics and quality game play. Ninja Spirit demonstrated that the TG-16 was capable of solid arcade ports, and they picked a great game to prove the point. Ninja fans around the world rejoiced, for the ninja action was good.
Find Ninja Spirit on eBay
Find Ninja Spirit on Amazon.com

Raiden: $15
This classic shmup title received an excellent arcade port on the TG16 and serves as a well-rounded shooting adventure that features two types of weapons and several powerups. Raiden in one of the most affordable foundations for the TG16/PC Engine’s strong shmup library.
Find Raiden on eBay
Find Raiden on Amazon.com

Turrican: $15
Turrican is a classic run-and-gun that is inspired by the level design and morph ball functionality of Metroid and the overall graphics design and weapons of the classic arcade title, Psycho-Nics Oscar. Unlike many other action games of its time, Turrican didn’t just force the player to complete a linear level, the real thrill for the player was to fully explore it and uncover every secret spot, hidden room and invisible passage.
Find Turrican on eBay
Find Turrican on Amazon.com

Bonk’s Revenge: $17
Unlike its predecessor, Bonk’s Revenge won’t allow players to rip right through levels with ease. There are a great number of enemies, as well as more intricately designed layouts that force the player to backtrack. Because of the greater number of foes, the designers have implemented stronger powerups and frequent opportunities to recuperate health. If you haven’t played Bonk’s Adventure, but are looking for a fun platformer with a twist, the game is well worth the investment if you have a TG16.
Find Bonk’s Revenge on eBay
Find Bonk’s Revenge on Amazon.com

Pingback: PoisonMushroom.Org - Combing the Net So You Don’t Have To » Blog Archive » Points of Interest - 10/25/07

Alien Crush and Demon Crush are both solid pinball titles.

You might want to make a note that many of these “cheapest games” would be cheaper on the Wii Virtual Console. (TG16 games are only $6!)

Sadly most of these games have doubled if not tripled in price nowadays. Most of them are solid titles however,

haha — I actually have a work-in-progress for an update 😉

It’s unfortunate that the prices have skyrocketed so badly. I only recently got a PC Engine Duo R and I did a spit take at the ebay prices.