When you add a console to your collection, the first thing you want to do is get a handful of games to keep you busy with your new toy. However, most of us can’t spend afford to spend fat pile of cash for a few games. This budget-friendly list should help you quickly find which games will start you off well without emptying your wallet. (Prices listed are an average eBay price for US games, including shipping.)
Check out the other Cheapest Games Worth Your Time articles 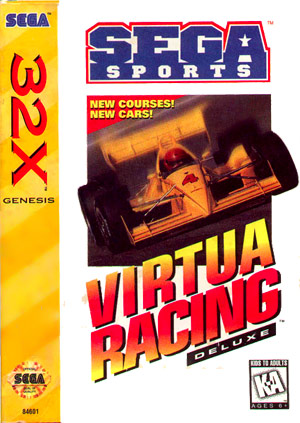 Star Wars Arcade: $6
This on-rails shooter may seem pretty basic, but it is actually quite challenging (I can get very far) and, of course, it’s Star Wars. This port is actually a well done translation of the Model 1 arcade title. The sounds are suitably authentic and are a tremendous achievement for a cartridge based system. In the game, you pilot your X-Wing through each level, completing the assigned mission objectives as you go.
Shop for Star Wars Arcade on eBay
Shop for Star Wars Arcade on Amazon.com

Tempo: $6
Developed by the same folks as the Bonk Series, Tempo is a platformer that is actually built around the concept of gameplay as performance art.. Tempo The game’s levels are actually sets built inside a TV studio, and an unseen audience often vocally reacts to the action on-screen. While it’s entirely possible to play through the game as if it were any other platformer, skilled play and the use of the more complex moves available to Tempo is pleasing to the audience to rack up points. Tempo also used the 32X’s 2D power and color capabilities to infuse the game with fluid animation and vibrant background graphics. This is an hidden gem that is quite as steal if you can find it.
Shop for Tempo on eBay
Shop for Tempo on Amazon.com

DOOM: $4
The 32X version probably is one of the worst ports of DOOM available, but I still found it to be good for some hours of fun if you haven’t spoiled yourself too much with the PC or Jaguar version.
Shop for DOOM on eBay
Shop for DOOM on Amazon.com

Knuckles Chaotix: $13
There wasn’t a true Sonic game in the entire 32-bit era (Sonic R and Sonic 3D Blast don’t count), but Knuckles Chaotix was pretty close. Because of this a true 2D Sonic collector needs to get his hands on a 32X and Chaotix. The game has the same fundamental elements as the original Sonic The Hedgehog trilogy, but adds the gimmick of 2-player cooperative gameplay that revolves around a the special ring force bond between characters. Both players are at all times connected on one single screen while neither player acts as the dominant force to move the game forward. Besides the staple of traditional Sonic moves and individual abilities this means some new tricks can be executed with the elastic force of the ring bond. It adds a great deal of depth and challenge to the otherwise basic Sonic formula and is either loved or hated by 32X owners.
Shop for Knuckles Chaotix on eBay
Shop for Knuckles Chaotix on Amazon.com

Kolibri: $15
This 2D shooter puts you in the role of a humming bird on a mission to destroy insect invaders such as wasps. Because of this nature them, Kolibri has a bit of and Ecco the Dolphin feel to it. Kolibri also has some of the most stunning 3D graphics on the 32X, so it is a wonderful showcase of a game in addition to being an interestingly unique shmup.
Shop for Kolibri on eBay
Shop for Kolibri on Amazon.com

Space Harrier : $10
Space Harrier is the perfect complement (or alternative) to After Burner for top-notch on-rails arcade shooting.
Shop for Space Harrier on eBay

If I only had $50 to spend on starting out a 32X collection, here would be my top picks (in order of priority):

This is another great article racket!!!!

BTW for Tempo I wouldn’t go with the 32X version the saturn version is more vivid in colors and better gameplay.

I had a 32X when I was a kid, and since I liked the sonic games, I got Knuckles Chaotix for it. That game is really great and even though I sold my 32x and Genesis without beating it, I eventually got into emulators and finally finished it…

So… what titles besides the ones mentioned are on the 32x? 😉
Glad you included Knuckles in the for $50 picks.

Yeah, there aren’t a lot of other good games that cost much more, but there are a few. 🙂

I’d take Shadow Squadron over Star Wars Arcade any day of the week. Star Wars Arcade is just too basic and dull in comparison. I kind of wish I knew what it was like before I’d picked it up, but I was fresh off of my X-Wing kick, I’d never see the game in the local arcades, and I was thinking it’d be something completely different (basically I was thinking it’d be something like Shadow Squadron). Color me seriously disappointed by it.

Is the import Tempo on Saturn a sequel or a similar game to the 32X? I love the Saturn game. 32X is the only Sega system I never owned and Tempo was probably the main game I wanted to try.

I always assumed the Saturn version was a full sequel.

Of my knowledge yes the tempo in the saturn was a sequel but I dont know japaneese so I played it without knowing what I was doing.hehe

I have said it before and I will say it again, Kolibri is hands down the best humming bird based shooter ever.

I know alot of you will look to other humming bird shooters but pound for pound Kolibri is the king of 2D humming bird Shumps.

Fantastic blog. So many gamers, even retro gamers, scoff at the 32x for having nothing good on it. I’m a Sega and Space Harrier feak, so I see the benefit of owning one, but, even the GP2X community calls an effort to emulate the system a ‘waste of time’. Depressing, really.

Missed one of my favourites, B.C. Racers…

I haven’t been able to find Knuckles Chaotix for under $20. Also if you are interested in any of these games you should also try Half.com.

Hello, great read! just Started my 32x Collection and the prices are getting crazy. Some of the cost have doubled in price over the years.
Thanx Again!

I have this whole boatload of CIB 32X games (still have the Sega Visions cards AND the merchandise pamphlets!).

No, I’m not selling them.

I wish I can find a fellow gamer that owns a 32x and a Sonic Chaotix game.

If funny that you say that Doom for 32x is one of the worst ports because, aside from not being able to strafe, I thought it was a LOT better than the SNES version.