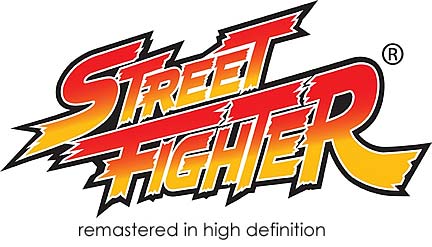 You may have read about the upcoming, remastered version of Super Street Fighter 2 Turbo that will be coming out on both the XBox Live Arcade and the PS3’s online service. Since the initial announcement, we have learned a few more details and I’ve been able to piece together my thoughts on the developments.

First of all, Gamekult posted a “confidential” slide from the Capcom press conference that actually showed off the new Ryu sprite and how it compared to the original sprite in addition to the previous standard of high-resolution fighters, Guilty Gear X.  (Also see this new Ken sprite)

I took the liberty of cleaning up that slide and adding some fresh comparisons so that it is easier to see the difference. I’ve even added the Ryu sprite from Street Fighter 3 — the largest Ryu sprite until this generation. 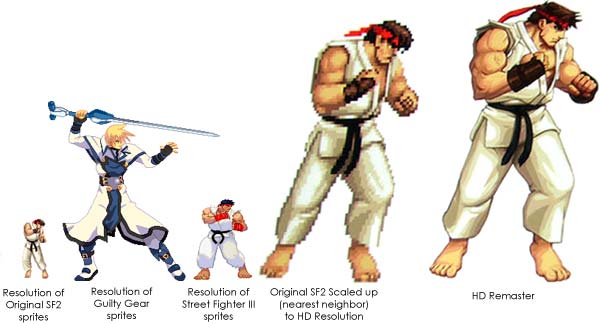 When I laid my eyes on this new sprite, I really had to do a double take to make sure that I was reading it correctly. But indeed, the new character sprites for SSF2T HD are so big and detailed, they don’t look like sprites at all. It looks like one of my remake dreams that I thought would never come true is actually becoming a reality.

As good as this single sprite looks, the true test will be seeing it in action. The number of frames in the character animation can make a huge difference. If they could exceed the animation in Street Fighter 3, I suppose that would be excellent.

It is also worth mentioning that the new sprites and artwork featured in this high definition remake is by UDON, the masterminds behind Capcom’s beautiful Street Fighter and Darkstalkers comic books.

When an iconic game like Street Fighter 2 receives such an overhaul, there is bound to be some gamers that are concerned. I thought this was addressed well by this comment made by Velops on the Joystiq post…

“There is also a risk that fans will not like the changes made to the animations. Hardcore fans have honed their skills based upon the the exact number frames for each attack animation. This includes hitbox sizes, reaction, and recovery times. If the change is noticeable, it could completely change the tiers for competitive online play.”

At the same time, I don’t think people should get too worried. Those dedicated to the original version will still have it to enjoy for their tournaments. Plus, there is nothing wrong with learning something new. A true fighting master should be able to learn different battle systems and adapt accordingly.

To ease the worry about how authentic this remake will feel, David Sirlin has confirmed that he is working on this project. He has worked on ports of Street Fighter 2 before and is an expert at the game himself.

Needless to say, I’m more that glad to see this true high-definition remake process turn into a continuing trend. Obviously, it would not be practical for every game, but it would be great to see some of the truly great games get a high-def makover while keeping the original feel intact. (High-res Sonic Trilogy, anyone?)

In case you missed it, we have an ongoing conversation about the Street Fighter remake going on in the forums. I’d love to hear your thoughts!

Update: A new Ken sprite has been unveiled

Pingback: PoisonMushroom.Org - Combing the Net So You Don’t Have To » Blog Archive » Points of Interest - 4/19/07

Hell yeah! I’ve heard about this before from a dude I know that is teh tru3 1337 additc7 to 2D fighters, he was trully excited with this game as well.
Regarding these “hardcore” fans I don’t their opinion counts really, most of these are just wannabe’s, true fighting fans (not me) won’t have any problem adapting to a new game.

Also I don’t think this game will animate or have colision boxes similar to the original, it’s just not practical, I hope they ignore these “fans” and instead create a quality game using true HD (1080p) sprites.

Anyway these ‘concerns’ are the reason I don’t really like remakes, these games often get stiffed because these “fans” expectations, in this matter Truesure got it right: Don’t do sequels (or remakes), that way you won’t get your development team creativity constrained by expectations and prejudice based on the previous games.

I for one would like to see brand new games using HD sprites rather than a batch of remakes of games we have already played to death.
baby steps ……

I read some of Sirlin’s comments on his blog and they will not be adding extra animations or features. They are getting paid simply to port the engine (quad)pixel perfect and add the new art. There will be no tweaks, no extra animation (which would screw up classic move timings anyway), or any of that unless Capcom ponies up money for extras. Right now the contract is for just the basics.

This is just a small theory… but could it be that Capcom are using this project to test out how expensive & time-consuming a HD 2D-fighter really is?
After all, Sirlin just finished with an “arcade-perfect” port of ST (on Capcom Classics Collection vol.2); and then he’s tasked to do the same thing *again*…

Well, considering they’re not making the aspect ration 16 x 9… If you think about it, though, the only difference between an HD fighter and a non-HD fighter would be much higher res/quality art and possibly 16 x 9. There’s no other difference. Capcom could do this sorta thing any time they want. We just need to convince them it’s worth it.

They should remake Darkstalkers. Of course, Morrigan would stay the same size.

About freaking time, how long has capcom been using the same sprites?

This is f’ing awesome! I’ve always wanted something like this to come to the consoles! And the fact that udon’s making the sprites are just the icing on this hadouken-laced cake, not to mention that (if you’re a 360 owner that is), Street Fighter Anniversary Collection is now backwards compatible, it just doesn’t get much better than this. Now let’s hope to god there’s a way to use that SFAC arcade stick that some of us have.

Wow…its pretty impressive o see the size of the originals compared to the new one. With games like Odin Sphere and Super Paper Mario on the horizon (which both seem like fantastic games), I’d love to see 2D games making a comeback.