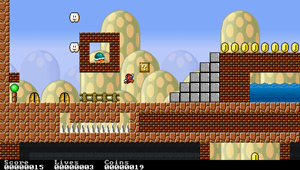 Just when you were getting over the fact that you could play Sonic the Hedgehog games on Nintendo platforms, you can now play an original Super Mario game on a Sony PSP.

While it is not made by Nintendo, Super Mario Mini is a beautiful hombrew effort by Arguru. This is by far the best and most commendable homebrew project that I have seen in a long time. From what I have seen, it looks very professional and take full advantage of the PSP’s wide screen. The graphical sprite style looks very similar to the Mario remakes on Super Mario All-Stars on the SNES.

Keep in mind that this project was coded from the ground up instead of being a port of an existing game or en emulator. There is also a custom level editor included an many Mario fans will get a big kick out of it. There are also a lot of new features in the new version 2.

will this work with 2.7 firmware?

this game download doesnt work. why does it take me to a different page that is not even the doawnload for the game

why wont this work on my xbox, i put it on a disk and put the disk in my xbox IT DOSNT WORK. DONT DOWNLOAD THIS EVERYONE IT DOESNT WORK

it does work u dipshit just not in ur xbox

Isn’t this listed for PSP not XBOX? Damn, Why can’t ppl read?

how come if your 3 lifes are over you have to restart from the begenning? is there anything i can do or change in the script so i have more than 3 lives?

level 5 is really hard. cant get past level 6.

Hi guys,
i just bought me self new psp not slim one can someone help by giving instction step by step how to put super mario game on me psp im kind new when it comes to games and pcs

the here link is broken but if you go to http://www.youtube.com/watch?v=mmVLeFJ0wVM there’s a download link on the side box. it tells you what 2 do from there 😛