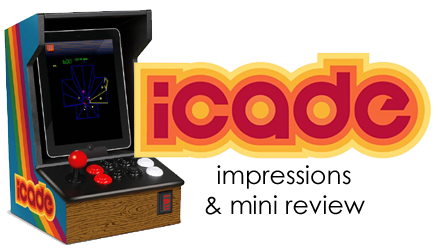 This past summer I decided to take a leap that a lot of retro gaming enthusiasts ponder, but far too few ever follow through with: I decided to add some kind of  dedicated arcade experience to my gaming setup.

I have long owned some very nice arcade-style fightsticks by companies like Hori, Agetec, and MadCatz, and swear by all of them for playing shmups or fighters on consoles.  I have even used adapters to hook a few of them up to the PC to play with MAME on occasion, but sitting on the couch or sitting at a desk with an arcade stick on my lap just did not equal the thrill of standing at a cabinet and playing on actual arcade hardware.  When visiting PAX East in March, I was spoiled by the setup in their ACAM game room and longed to have some kind of similar experience available to me at home.  I decided that maybe this summer it was time to actually take that leap.

My first foray into arcade gaming at home was one that I wouldn’t have anticipated having while I was at PAX.  In May I found out that my employer would be furnishing me with a new iPad 2, and like most gamers my thoughts quickly jumped to the question of “what games can I play on this?”  I’d already had my fill of touch-based games on my smartphone, so I wondered what the iPad might be able to offer that was new.  Fortuitously, ThinkGeek announced the production of their iCade around the same time as I learned I would be receiving my iPad.  After contacting them about doing a review, they were happy to send me a unit.  Perhaps my summer of arcade gaming could begin!

When the iCade box arrived, it was relatively easy to unpack and setup (although I did accidentally crack one of the plastic screw holders by over-tightening), and after Bluetooth tethering my iPad to the unit (something that took less than a minute) and downloading the Atari’s Greatest Hits bundle (a $15 software package), I was ready to go.

The most important hardware on the iCade – the buttons and the stick – feel pretty solid.  I would compare them favorably to the feel of the Dreamcast Agetec stick, which is a strong stick that just feels a little stiffer and springier than something like a Hori Real Arcade Pro (which I prefer).  The buttons are a little close together for my liking, but having eight buttons in a small space is a nice feature and I never noticed any cramping or uncomfortableness (of course, I also haven’t played any games that require me to use all eight buttons).  The unit itself is fairly light, but hasn’t moved around or jostled during play on the variety of surfaces on which I’ve placed it.  The top board of the unit is built on a hinge that allows you to easily insert and take out the iPad, and it also doubles as a good light shield for the screen. The glowing (but non functional) coin door is a nice touch, and the “retro” styling of the artwork is well implemented.  In my mind, the only design flaw is the lack of a built in dock or a pass through hole for a docking/charging cable; you will have to take the iPad out to charge it up.  This is ultimately a minor quibble, and I can’t imagine how much more the folks at Ion and ThinkGeek could have included in this unit without significantly increasing the price. 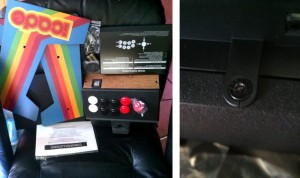 Showing Off the Hardware (and my Mistake)

It is hard to entirely separate the review of the unit from the review of the flagship software title that supports it, as the unit ships with a voucher for one free game from the Atari’s Greatest Hits collection and includes instructions for playing all of them.  By itself, the Atari software and selection of games is quite good, almost on par with their strong Atari Anthology released for the PS2, Xbox, and PC in 2004.  There are a lot of classic arcade titles such as Missile Command, Centipede, Black Widow, Lunar Lander, Crystal Castles, Asteroids, Pong, Tempest, and Warlords and an even wider selection of VCS titles including the Swordquest and Adventure games, Combat, Yar’s Revenge, and others. 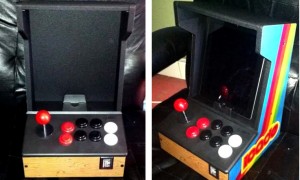 Fully Assembled (with and without iPad)

The interface is easy to navigate, includes instructions, artwork, and a lot of control configurations for the touchscreen, and seems to faithfully emulate these games.   The problem with the collection is that the vast majority of the arcade games included didn’t use a joystick and buttons as their original control scheme.  Instead, almost all of these games used trackballs, dials, dual sticks, or carefully arranged buttons to play on their original cabinets.  So while games like Millipede or Pong can be fun with the joystick, they simply don’t control as well as they did in the arcade and thus the arcade-at-home experience that the iCade could potentially provide is unrealized with the bundled software.

The good news is that the iCade folks have made their dev kit public domain, so more developers can potentially take advantage of the iCade’s controls when designing new iOS games.  I now fantasize about Capcom implementing the controls for Street Fighter IV or Cave allowing us to play DoDonPachi Resurrection using the unit.  Standing at the kitchen counter or sitting at a table with the iCade really can provide a nice simulation of the arcade experience for a relatively low entry price point (assuming you already own an iPad, of course). 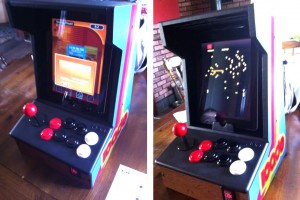 However, because of the shortcomings of the existing software, my desire to have an arcade gaming experience at home was not sated by the iCade.  In the conclusion of this article, I will discuss the next step in my journey: building a MAME cabinet.  Would a homemade cabinet with full sized arcade controls and a trackball scratch that arcade itch? Stay tuned…

Nice article. When I owned an iPad I comtemplated buying one but the software support just wasn’t there (and still isn’t). My arcade itch is pretty well scratched with home consoles + arcade sticks. My favorite is probably the Sega Genesis 6 button one.

Don’t forget the iControlPad for smartphones, or even as an ordinary gamepad!

If you are willing to jailbreak, I believe MAME for ios has icade support.

I have been dying for my own MAME cabinet and I cannot wait to read your next article.

Cool little device, Ive been planning to build a cab as well, can’t wait to see how yours turns out

Actually there’s been a lot of iCade support added to iPad games lately, and more is coming. I see a lot of people claiming that there is no software support for the device without jailbreaking and that just isn’t true anymore.

My favorites to play with the iCade lately have been Velocispider, Space Inversion, Minotaur Rescue, and GoatUp. See these two links to keep up with iCade support:

@lost thought – in the time since I wrote this, I have enjoyed some of these games (Match Panic as well!). Thanks for the links, I will look into a few of the others. I hope support continues to grow, as many of these games are BETTER than the ones in the Atari collection since they are programmed with the iCade in mind…

I am thinking maybe this icade can be modded to add a screen, and change the USB controller for the button, and literally just put an NUC computer inside to be a full blown MAME machine… seems like its totally doable.. i just need to figure out what is the best HDMI screen for the unit.