In case you missed it, Street Fighter IV was officially announced less than a week ago. (I knew Capcom was smart) We also got a taste off the official Street Fighter IV Teaser Trailer soon after the announcement. If you’ve watched the trailer, you know it looks quite impressive, but it’s hard to tell what the game is actually going to be like based on the promotional footage. Or is it? Check out this new interview video with Capcom’s Christian Svensson for additional insight…

Based on Svensson’s comments we have a slightly better idea of what to expect for Street Fighter IV than we originally thought. When asked the most important question, “2D or 3D?”, his delayed answer was “…I think you’re going to have to wait a little longer to find out… or you’re going to have to look very closely at the trailer and try to figure out what direction we’re heading with it… look carefully at the trailer, very carefully and you will see a lot of the direction we are looking to taking the title in.”I don’t know about you, but that pretty much tells me that Street Fighter IV will be a 2.5D fighter, and possibly cel-shaded. Street Fighter and 2D purists maybe be a bit disappointed by this, but as long as they take their time to make the gameplay live up to the standard of the 2D series, I look forward to seeing how this turns out.

In addition to the 2D/3D issue, one of the biggest question was who was acutally going to be developing Street Fighter IV. Capcom USA holds the rights to the Street Fighter franchise, but it turns out that they will indeed be contracting the development work out to one of Capcom’s Japanese development teams. 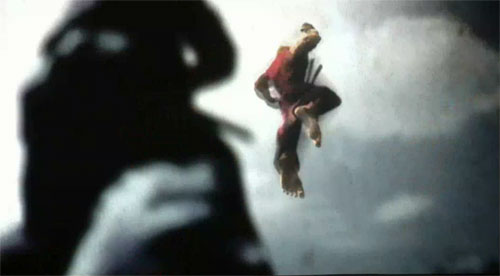 Street Fighter IV’s producer, however is Yoshinori Ono, who also produced Onimusha: Dawn of Dreams, Shadow of Rome, Capcom Fighting Evolution, and Chaos Legion. If you look at the metacritic scores, you can see that he doesn’t have the greatest track record. Since Street Fighter IV shouldn’t be a mediocre 3D action game or a shovelware mashup fighter, I’ll give Capcom the benefit of the doubt here, but I’m not getting my hopes too high.

In a separate statement from Svensson on the Capcom forums he said, “The game is further along in development than probably most of you think, but as we’ve stated, it’s still quite a ways off.. All of that will be revealed over time… the next bits will be revealed a bit later this year” This is probably why we had been hearing rumors for a while, but are just now hearing things. This also indicates, that this shouldn’t be a rushed project, but instead should allow the development team to carefully craft a technical fighter.

It’s been a long teasing process with Capcom USA and Street Fighter fans as, up to this week, we have only seen character sprites and one background from the high definition remake of Street Fighter 2. This week we finally got to see some glimpses of the remix in action. This cell phone video was the first shot to be released, but you can also catch some brief, but higher-quality clips of the HD remix in the interview video above. 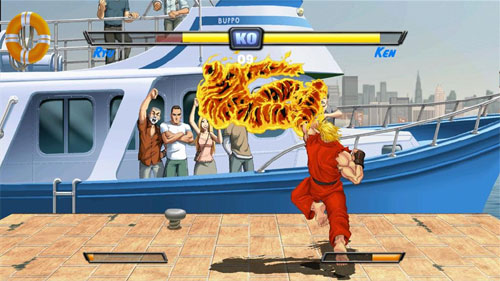 We haven’t seen any videos that were of high enough quality to be able to analyze the the nuances of the character animation, but it seems that Capcom USA and UDON have accomplished their goal of a quality remaster. From the sprites we have seen in the past and this new set of three official work-in-progress screenshots, we know that the characters and individual frames look good, but if you watch the video clips, you can tell that the game looks and runs just like the original. The number of frames (including background animations) looks like the same as the original arcade. This is good for SF2 purists, but may be a disappointment for those that want more eye candy.

Even though the Svensson interview was mainly for those interested in hearing details about Street Fighter IV, there was still some interesting information shared about SSF2T HD Remix as well. The features that were touched on in this installment include…

It sounds like Capcom is working especially with fans and experts of the series to make this a killer release for die hard Street Fighter enthusiasts.

HD Remix’s producer, Rey Jimenez also had these words to say about the back end of the HD version,

“Brian mentioned that we are basing the game off of the Dreamcast version. That was done because the DC (Japanese version) code is easier to work with, and there was already existing network code within the game to start with because the Japanese version had an online matchmaking service. Now, before you guys start throwing tables in disgust because we are using the DC version and not the arcade version, realize that the DC version was an arcade perfect version. Or at least it was really close. Some “dip switches” were changed for the DC version that gave it some of its interesting quirks. For SFHD, we are simply flipping those “switches” back to their original settings so that the game plays like the arcade version. Also, we are making fine adjustments as needed to make sure it plays exactly like the arcade. So, while it is true we are basing the code off of the DC version, the end result will play arcade perfect.”

So it seems that HD Remixes details are starting to fall into place and it will be exciting to see things as the game gets rounded out.

Some great points there, you’ve been covering this game vey well. I especially iked the point about the possibility of a 2.5D Street Fighter. I totally agree that a cel shaded 2.5D game is probably whats on the cards. I’d prefer a straight HD 2D fighter with fluent animation, online and stacked with content.

One quimble though, about Yoshinori Ono. Onimusha Dawn of Dreams is meant to be an aweosme game(I’m stil trying to get my PAL copy at a decent price).

Proves how cool the Dreamcast is so this gets the thumbs up from me.

I can’t wait for the HD Remix. I for one was thrilled when I watched that video and saw that the animations have remained the same. It’s the best of both worlds IMO.